Did the Kray Twins Use an Elephant to Rob a London Tram?

An image of an elephant standing near a tram in London is frequently shared with a fictional backstory about English twin gangsters Ronnie and Reggie Kray. 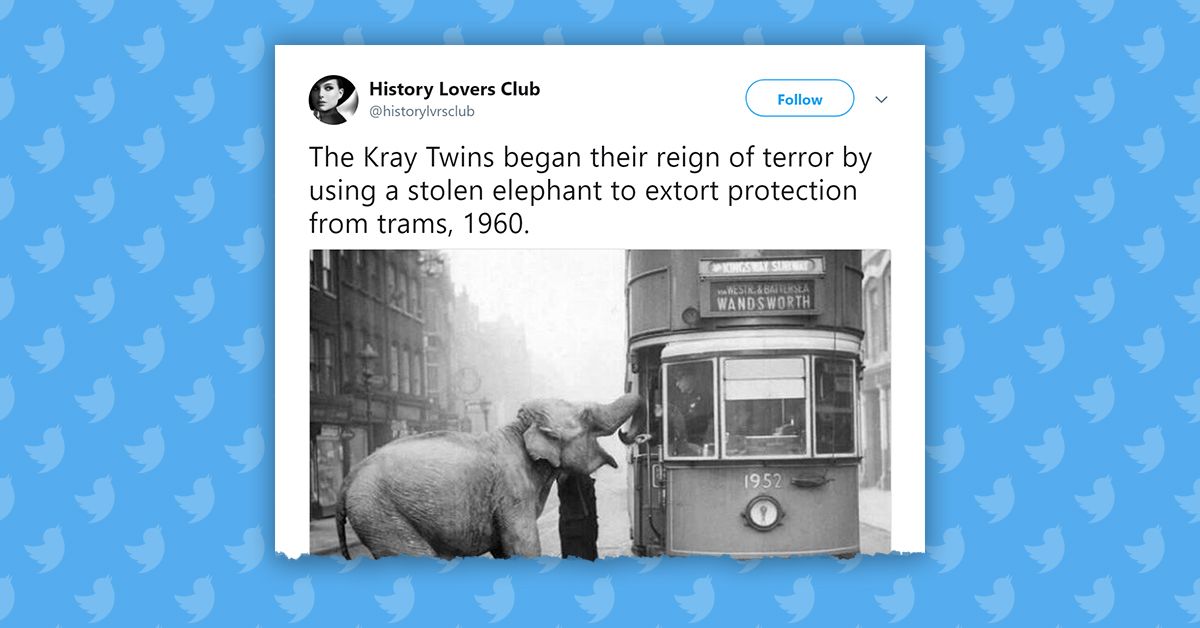 Claim:
An image shows the Kray twins starting their organized crime "reign of terror" in London by robbing a tram with the help of an elephant.
Rating:

An image of an elephant standing near a tram with its mouth open is frequently shared on social media, attached to an odd story about the Kray twins, who were two of the most feared mobsters in London during the 1950s and 1960s and whose glittering, violent lives as nightclub owners turned organized crime leaders have been memorialized in popular culture.

The elephant supposedly was connected to the start of their "reign of terror" in London: The Kray twins began their reign of terror by using a stolen elephant to extort protection from trams, 1960.

Unfortunately, none of this is true. The image does not feature the Kray twins, it was not taken in 1960, and it does not show the beginnings of any sort of reign of terror, unless you have an unusual definition of the word. According to the caption provided by Getty Images, this photograph was taken in December 1936 on Grays Inn Road in London:

December 1936: An elephant stops a tram on Grays Inn Road, London, to cadge an apple from the driver.

It's unclear when this image first became associated with a story about the Kray twins. This photograph has been accompanied by the erroneous caption since at least June 2016, when it was posted by the "Pictures in History" Twitter account. The caption also contains some misinformation about London's trams. This photograph could not have been taken in 1960, as the tram system ended in 1952 (it later returned in 2000):

After nearly a century of service the tram has made its final appearance in London.

The very last tram to rumble along the capital's streets arrived at south-east London's New Cross depot in the early hours of this morning.

This image has nothing to do with the Kray twins, but it did make us wonder: Did Reggie and Ronnie Kray really use elephants to terrorize London tram riders? No, not that we can tell.  No in-depth look at their lives or careers that we were able to find made any mention of pilfering pachyderms.