Is Kraft 'Paying You' To Skip Cheesecake Due to a Cream Cheese Shortage?

A limited-time offer in December 2021 promised to reimburse 18,000 people to replace their homemade cheesecake with a different dessert. 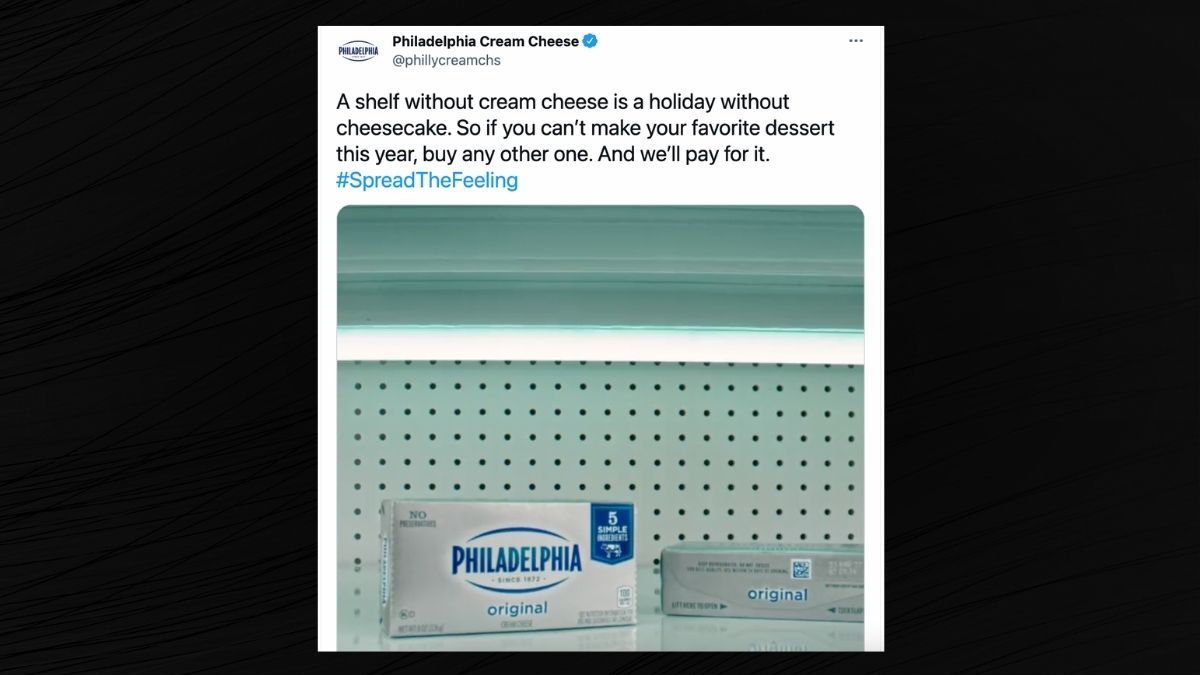 Claim:
Kraft will "pay you" if you purchase a non-cream cheese dessert.
Rating:

In December 2021, Kraft-Heinz, the company that owns the ubiquitous Philadelphia brand of cream cheese, made a limited offer of a "$20 digital reward" for consumers who purchased desserts to replace their homemade cheesecakes.

Kraft did not offer to pay the public at large to buy desserts. Kraft promised only to "pay you" if you were one of 18,000 consumers who reserved the reward during specified time slots.

In mid-December 2021, the cream cheese brand Philadelphia, which is owned by Kraft-Heinz, announced an unusual offer — a $20 "digital reward" in exchange for purchasing a dessert that doesn't contain cream cheese (e.g., a dessert other than cheesecake).

The video contained in the above ad suggests, with mention of an empty grocery store shelf, that the offer is directly related to a shortage of cream cheese.

The offer went viral, with a number of outlets reporting, using varying word combinations, that "Kraft will pay you" to replace Christmas cheesecake during the 2021 holiday season.

So, was Kraft promising to "pay you" to skip the cheesecake on Christmas 2021? It all depends.

Admittedly, this was the first we'd ever heard of a "Christmas cheesecake." Nevertheless, the headlines about Kraft or its Philadelphia subsidiary could have led to the false belief that anyone could get $20 to skip out on cheesecake. That is not the case.

The small print on the website for the offer stated that it was limited to as long as supplies last. If you clicked of "Official Offer Terms" at the bottom of the page, you would be taken to a PDF that stated that 18,000 people would get up to $20 reimbursed if they signed up during specified time slots and showed a receipt for a dessert that replaces a homemade cheesecake.

For those who wished to participate, there were two time slots, one on Dec. 17 and the other on Dec. 18, 2021, to sign up and hope you were a quick enough draw to get the reward. Once applicants met the requirements and secured their reward, they would have to wait an estimated two to four weeks to receive it, per the Terms and Conditions.

It's unclear to us whether this actually helped ease the cream cheese shortage or simply served as a promotion for Philadelphia's brand. After all, the offer came with this caveat:

Acceptance of Offer shall constitute and signify each Participant’s agreement and consent that Sponsor and its designees may use the Participant’s name, city, state, likeness, photo, and/or information in connection with the Promotion for promotional, advertising or other purposes, worldwide, in any and all media now known or hereafter devised, including the Internet, social media platforms, without limitation and without further payment, notification, permission or other consideration, except where prohibited by law.

We reached out to Kraft to learn more about the offer, but didn't get a response in time for publication. We will update this story if we get a response.