Does Kinking a Live Electrical Wire Stop Electricity and Make it Safe?

An image represents that you can safely work on live electrical wires by simply kinking them "like a garden hose." 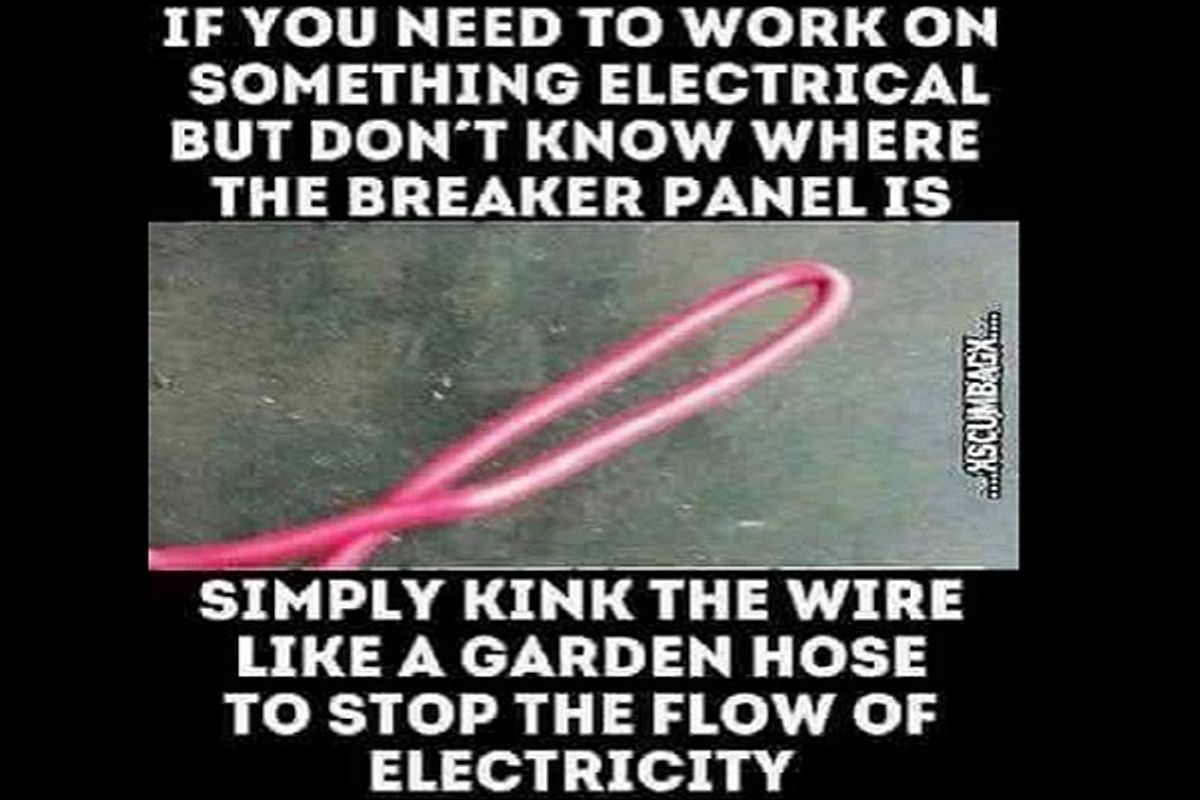 Claim:
Kinking an electrical wire stops electricity from flowing through it like kinking a garden hose stops water from flowing.
Rating:

An image circulating of Facebook makes the claim that simply bending an electrical wire makes it safe to work on it even when it is live, because doing so stops the flow of electricity through the wire.

The text accompanying a photograph of a bent wire reads:

If you need to work on something electrical but don't know where the breaker panel is, simply kink the wire like a garden hose to stop the flow of electricity.

This image is one example of a series of similar japes that involve inducing people into believing ridiculous things — including, unfortunately, actions that could prove very dangerous if attempted.

Don't ever do what this image presents, said Bill Elarton, chair of Construction, Maintenance and Utilities at Los Angeles Trade-Tech College. Nothing short of breaking the wire will stop the flow of electricity, and that's not safe either — plus, of course, it would defeat the purpose of trying to fix an electrical problem.

"Homeowners can do this stuff, but even with electricians, unless it’s absolutely necessary, all the rules say turn [the power] off," he told us.

Electricians are specially trained to handle wires and other electrical infrastructure, he said. There are specific dangers unsuspecting homeowners may face by trying to fix wiring without shutting off power from the breaker. For instance, while your skin provides a natural barrier of protection against an electrical current, if it's wet, your defenses are down.

"You’re skin has a lot of resistance to electric flow, as long as it’s dry," Elarton said. "Once you get sweaty your resistance drops dramatically and then you can really get hurt form an electric shock."

Further, when people get shocked that phenomenon can cause muscles to contract -- and instead of dropping a wire, you can clamp down on it. This can be fatal.

"We teach electricians how to touch things the right way," he said. What kills people are variations of "the path [electricity] takes through you, the amount of current flow or duration you’re attached to it."

Sadly, even trained professionals can have fatal accidents working with electrical infrastructure. It is always best not to take instructions from a meme on social media but seek professional assistance on something as potentially dangerous as electrical wiring.

Bottom line: if you have an electrical problem, call in a professional trained to deal with it. If you decide to undertake the project yourself, make sure all power is off and nothing is live before you do.

The source of the meme seems to be a web site iFunny.com, under the section #NaturalSelection, where participants poke fun at people who have what they see as self-inflicted accidents under the premise that nature is weeding out the unfit, a take on the evolutionary principle of natural selection.