After Khizr Khan's emotional DNC speech, rumors were circulated claiming the father of a fallen U.S. soldier is a Muslim Brotherhood operative. 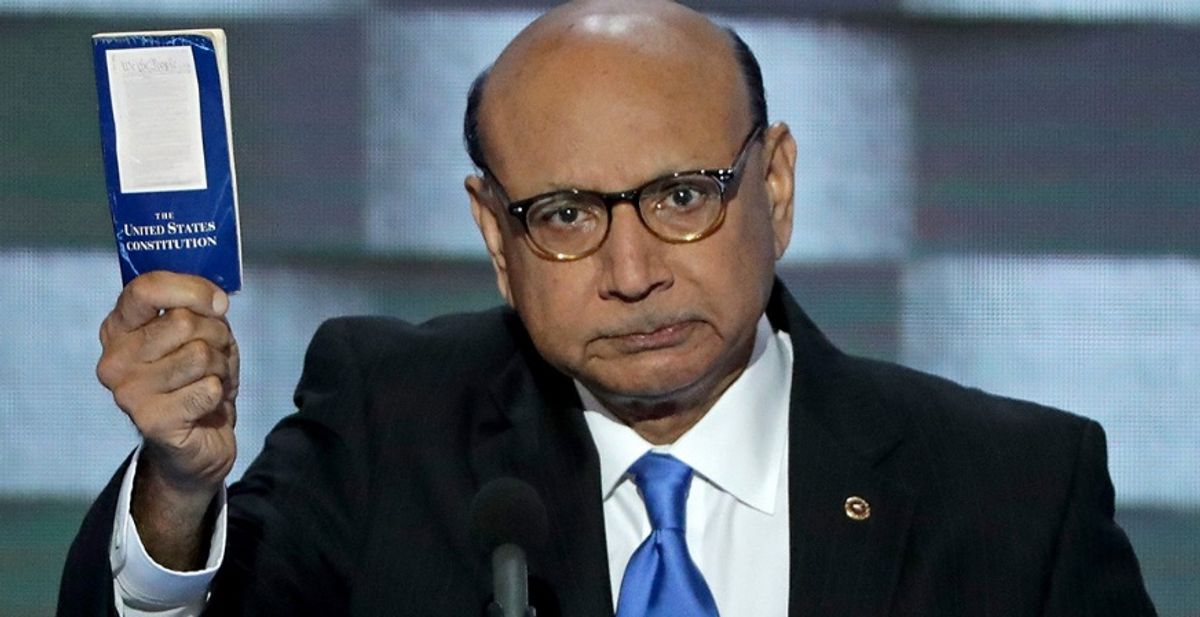 Khizr Khan is a Muslim-American.

No credible evidence supports the assertion that Khan is an operative of the Muslim Brotherhood.

An unexpected controversy took root after the July 2016 Democratic National Convention (DNC) involving key speaker Khizr Khan, who took to the convention stage to speak about Donald Trump, Muslims in America, and the loss of his son, U.S. Army Captain Humayun Khan:

Khan's speech was preceded by brief introductory footage of Hillary Clinton describing his immigration to the United States, and how his son was killed in action in Iraq while guarding his Army unit. Khan reiterated his son's story and challenged Donald Trump (who has at times proposed barring Muslims from entering the United States) to read the U.S. Constitution:

Like many immigrants, we came to this country empty-handed. We believed in American democracy; that with hard work and goodness of this country, we could share in and contribute to its blessings ... Our son, Humayun, had dreams too, of being a military lawyer, but he put those dreams aside the day he sacrificed his life to save the lives of his fellow soldiers. Hillary Clinton was right when she called my son "the best of America."

If it was up to Donald Trump, he never would have been in America. Donald Trump consistently smears the character of Muslims. He disrespects other minorities: women, judges, even his own party leadership. He vows to build walls, and ban us from this country. Donald Trump, you're asking Americans to trust you with their future.

Let me ask you: have you even read the United States constitution? I will gladly lend you my copy. [Waved "Pocket Constitution."] In this document, look for the words "liberty" and "equal protection of law."

Have you ever been to Arlington Cemetery? Go look at the graves of brave patriots who died defending the United States of America. You will see all faiths, genders and ethnicities. You have sacrificed nothing and no one.

Trump repeatedly issued comments about Khan via Twitter as the Khans were being interviewed about the speech and about Trump's reaction to it:

Captain Khan, killed 12 years ago, was a hero, but this is about RADICAL ISLAMIC TERROR and the weakness of our "leaders" to eradicate it!

I was viciously attacked by Mr. Khan at the Democratic Convention. Am I not allowed to respond? Hillary voted for the Iraq war, not me! — Donald J. Trump (@realDonaldTrump) July 31, 2016

This story is not about Mr. Khan, who is all over the place doing interviews, but rather RADICAL ISLAMIC TERRORISM and the U.S. Get smart!

On 31 July 2016, the dispute escalated when Trump suggested to ABC's George Stephanopoulos and the New York Times' Maureen Dowd that Khan's wife Ghazala was silent during her husband's DNC speech because, as a Muslim female, she was not permitted to speak:

Mr. Trump told Mr. Stephanopoulos that Mr. Khan seemed like a “nice guy” and that he wished him “the best of luck.” But, he added, “If you look at his wife, she was standing there, she had nothing to say, she probably — maybe she wasn’t allowed to have anything to say, you tell me.”

Mr. Trump also told Maureen Dowd of The New York Times, “I’d like to hear his wife say something.”

A day earlier, Mrs. Khan told MSNBC that she was unable to bring herself to speak at the convention due to her ongoing grief over her son's death:

Ms. Khan did speak to MSNBC’s Lawrence O’Donnell, saying she “cannot even come in the room where his pictures are.”

When she saw her son’s photograph on the screen behind her on the stage in Philadelphia, she said, “I couldn’t take it.”

“I controlled myself at that time,” she said, while choking back tears. “It is very hard.”

On 31 July, Ghazala Khan wrote an editorial for the Washington Post addressing the ongoing controversy. The same day Mrs. Khan's editorial appeared, bloggers Theodore and Walid Shoebat published a lengthy polemic stitching together circumstantial evidence to suggest Khizr Khan was a member of the Muslim Brotherhood:

The Muslim who attacked Donald Trump, Khizr Muazzam Khan, is a Muslim Brotherhood agent, working to bring Muslims into the United States. After reading what we discovered so far, it becomes obvious that Khan wanted to ‘trump’ Trump’s Muslim immigration policy of limiting Muslim immigration into the U.S.

But not so fast. Trump we have your back.

The Shoebats went on to cite two papers written by Khan in 1983 and 1984 pertaining to the Organization of Petroleum Exporting Countries, or OPEC, described as "an intergovernmental oil company consisting of mainly Islamic countries" and a second titled "Juristic Classification of Islamic Law" (both of which were written prior to the family's move to the United States). With respect to the latter, Shoebat bracketed a not-present "Sharia" in the title and included a snapshot of the only page of the paper freely available (which in no part suggested support for Sharia law or membership in the Muslim brotherhood and appeared to be an academic piece, not an advocacy paper). The Shoebats maintained that in the paper "Khan shows his appreciation for the icon of the Muslim Brotherhood," referencing a citation holding that "The contribution to this article of S. Ramadan’s writing is greatly acknowledged."

However, the quoted text was suspiciously elided from the screenshot that appeared on Shoebat and looked far less damning in its actual context as an academic footnote: The elided citation was offered as support of the assertion that Khan's work was undersigned by the "Saudi Wahhabist religious institution" and cited a "recent report" that Khan had moved from Pakistan to the United Arab Emirates, "a hotbed for the Muslim Brotherhood."

That "recent report" was a Politico article that described the Khan "family’s journey from Pakistan to the United Arab Emirates, and from there to Boston," which in turn referenced Khan's 2005 interview with the Washington Post about the recent loss of his son Humayun. In its original context, the interview revealed a very different picture than the one painted by the Shoebats:

[Khan] and his wife would talk often to their three boys about why they decided to come to the United States, he began. It was the 1970s, and Pakistan was under military rule. They came to Silver Spring to have more freedom and opportunity.

His son was always reading books about Thomas Jefferson; that part of his passion was certainly his father's doing. When the boys were small, Khan would take them to the Jefferson Memorial. He'd have them stand there and read the chiseled, curving words about swearing hostility against tyrannies over the minds of men ... It was not exactly surprising, he continued, that Humayun quoted Jefferson in his admissions essay for the University of Virginia, a line about freedom requiring vigilance. It was a bit surprising, though, when he signed up for ROTC and told his dad that after graduation in 2000, he wanted to join the Army.

"He said that it seems only fair and logical to join the Army," Khan said. "Because he wanted to complete the journey — he felt that ROTC had completed him as a person, and he wanted to give back. That's what he wanted to do."

It was logical, Khan said, and how was a lawyer going to argue with logic?

Humayun finished his four years of service and was preparing for law school when the Army called him back to duty. As he was moving into Iraq last year, Khan called him and they spoke briefly, a conversation he has turned over in his mind a million times since.

His son said, "Remember I wrote that article for admission to U-Va.?" Khan said, pausing, taking the pen cap off and putting it on again, his voice steady. "He said, 'I meant it.' He said that. He wasn't going there through some thoughtless process, or thoughtlessly following orders. He thought he was serving a purpose."

Khan recounted the details of his son's death to the paper in 2005, noting that by all accounts his son sent his unit to safety before running towards a suicide bomber:

Over time, his colonel and his fellow soldiers told Khan how his son died, and that, too, had some sort of horrible logic to it. Humayun's job at the base in Baqubah was to inspect the soldiers at the gates, where crowds of Iraqis would sometimes gather. Humayun went early that morning, which was just like him. He saw a taxi speeding toward the gates, too fast, he thought. He yelled for everyone to hit the dirt. Then, as was his nature, he went running toward it, they said.

"Ten or 15 steps with his hand outstretched," his father said, stretching his own arm out in front of him almost a year later, telling some ghost taxi to stop in a downtown conference room.

The explosives detonated before the car could ram the gates or the mess hall nearby, where several hundred soldiers were eating breakfast.

The Shoebat page was something of a Gish Gallop, patching together a pile of loosely or unrelated details to paint a picture of a Muslim Brotherhood infiltrator in the Army who was killed before he could complete some undescribed subversive mission:

I can go on and on. Is it likely that Khan’s son was killed before his Islamist mission was accomplished? Only another type of investigation will determine that. Do they ever mention how many soldiers have died because of Muslim traitors? Do they ever bring up how many Christians in the US military were killed? Yet the modernists and homosexuals continue to attack Christians. But soon everything we need to know will be uncovered. As we say in the Middle East: the snow always melts and the sh*t under it will soon be revealed.

The Shoebats' insinuations about the younger Khan directly conflict with all other published accounts about him. Had Humayun's intent in joining the Army been one of sabotage, there would be no reason to expect he'd ultimately lay down his life to stop a suicide bomber from killing scores of other American soldiers — yet by every telling, that is exactly how Capt. Humayun Khan died.

The other big "smoking gun" Shoebat cited to support their theory that Khizr Khan is a Muslim Brotherhood operative is his work as an immigration lawyer. By their rationale, Khan bears a grudge against Donald Trump for the candidate's myriad statements about Muslims and immigration — but although it's true that Khizr Khan and his sons were Muslims immigrants to the United States, none of the "evidence" presented by Shoebat remotely supported the idea that Khan is an operative of the Muslim brotherhood.

Not only were most of the points made about Khan by Shoebat unrevealing and tenuous, the heroic death of Humayun Khan flies in the face of claims the family were Muslims operatives seeking to harm Americans or work against U.S. interests. Capt. Khan enlisted in the U.S. Army by choice and died protecting his fellow soldiers; by contrast, the only "evidence" linking his family to the Muslim Brotherhood are irrelevant, decades-old papers written about OPEC and Islamic law by Khizr Khan before he immigrated to America.