Does a KFC in Dearborn, Michigan Abide by 'Sharia Law'?

A photograph purporting to show a fast food restaurant in an American city was actually taken in Saudi Arabia. 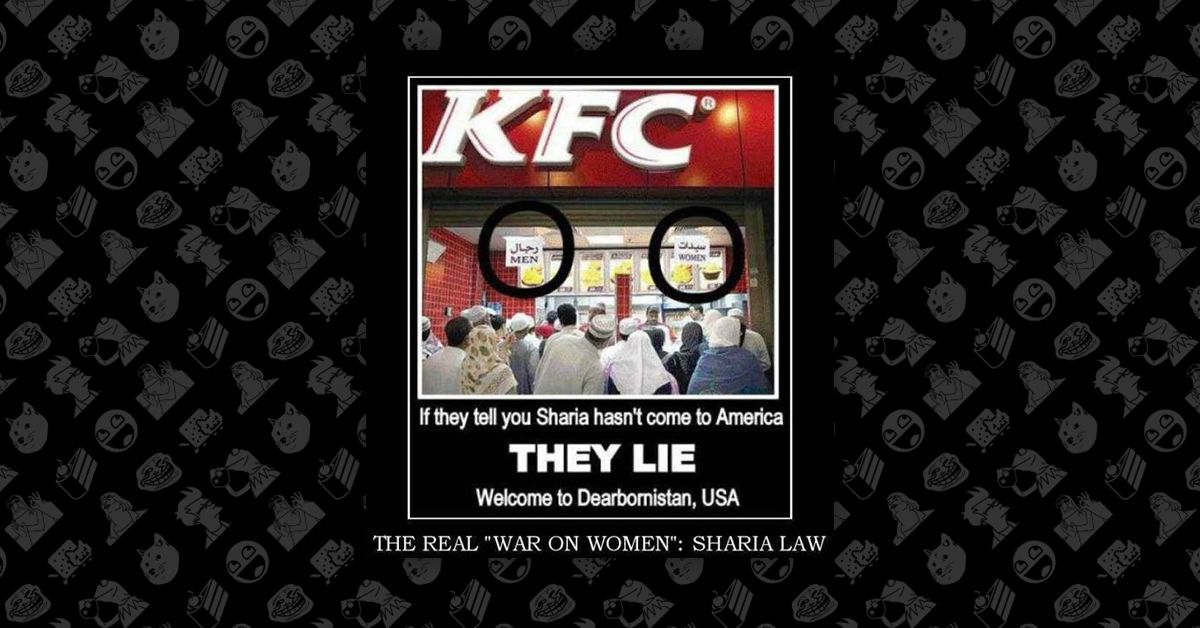 Claim:
KFC in Dearborn uses separate lines for men and women, a menu written in Arabic, and abides by Shariah Law.
Rating:

In June 2017, a photograph purportedly showing a KFC operating under "sharia law" in "Dearbornistan, USA" made the usual rounds on social media: This meme does not show a KFC in "Dearbornistan, USA," a reference to the city of Dearborn, Michigan, which has been subjected to numerous false rumors for years because of its large Muslim population. The photograph was actually taken at a KFC in Saudi Arabia by Reuters photographer Ali Jarekji in December 2007, and it was originally accompanied by the following caption:

Muslim pilgrims line up at a KFC restaurant outside the Grand Mosque in Mecca December 13, 2007. Around 1.5 million Muslims from around the world are expected to arrive in Saudi Arabia for the haj pilgrimage. REUTERS/Ali Jarekji (SAUDI ARABIA)

This image really does show a men's line and a women's line (separated by a small dividing wall) at a KFC restaurant in 2007. However, this image was taken in Saudi Arabia, where gender segregation is still common practice, rather than anywhere in the United States.

Photographs from the Yelp page of a KFC in Dearborn, Michigan, show that the restaurant does not list its menu items in Arabic or divide its customers based on gender:

A similar story appeared in 2016, when a Starbucks in Riyadh temporarily would not allow women to enter until it reinstalled a "gender segregation wall", in turn spawning rumors that the coffee chain had enacted the policy across the board to conform with "sharia law".