Did a mandatory gun ownership law in Kennesaw, Georgia, cause the town's crime rate to plummet? 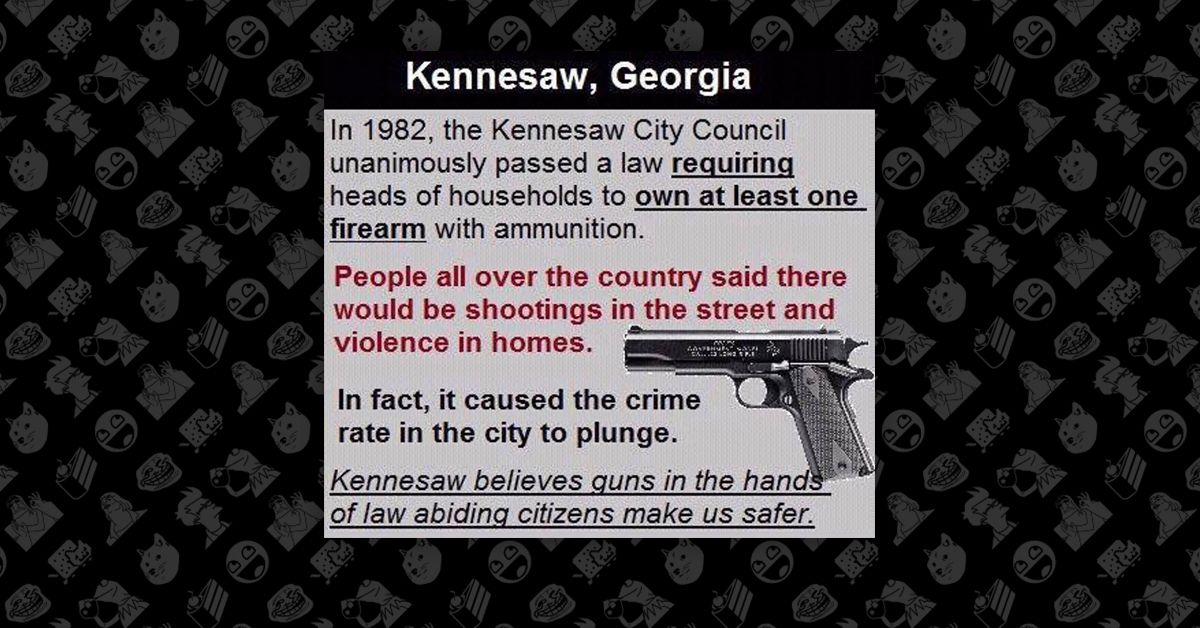 A mass shooting in Roseburg, Oregon, revived interest in a number of memes about gun control, among them the above-reproduced claim involving the town of Kennesaw, Georgia.

According to the graphic shown here, Kennesaw mandated gun ownership for all households in 1982, and as a result, local crime rates dropped dramatically. But even the most basic element of the claim, about the imposition of mandatory gun ownership in that town, wasn't quite true.

The law in question stated:

That law was a direct response to a (since repealed) ban on the possession of handguns that was implemented in Morton Grove, Illinois, in 1981. An important point of distinction between the two examples was that Morton Grove's was enforceable while Kennesaw's was largely symbolic and was never intended to be enforced. The latter, therefore is clearly not an exceptionally good indicator of the effect of such a mandate on crime statistics.

As Kennesaw Police Department's Lt. Craig Graydon explained, gun ownership wasn't truly compulsory in Kennesaw (nor was it ever intended to be):

Kennesaw's 1982 gun mandate was a direct response to a gun ban enacted a year earlier in Morton Grove, Illinois. That was later deemed unconstitutional, but Kennesaw's law is still on the books.

Added Lt. Graydon, "It was not meant to be an enforceable law. The police department has never searched homes to make sure you had a gun. It was meant more or less as a political statement to support citizens' second amendment rights to own firearms."

Homeowners in Kennesaw who don't buy a gun are not punished. In fact, there are several exemptions, including religious objections, if someone is a convicted felon, has a mental illness or simply can't afford a weapon.

Mayor Stephenson says that in the five years since the gun ordinance was adopted the city has never prosecuted anyone for refusing to keep a gun. Officials concede that the ordinance is, for all intents, unenforceable.

"We're not interested in searching people's houses," said the Mayor. "Mostly, what we wanted to do was make a statement, to make people sit up and take notice. And they did, and we're proud of that."

Much of the claim hinged on the passage of time for plausibility. Hard statistics for the crime rate in a small Georgia city before 1982 were difficult to come by in 2015 (more than three decades later), but the author of a 18 March 1982 New York Times editorial titled "The Guns of Kennesaw" squeezed those numbers from the initially "reticent" Mayor Darvin Purdy and Chief of Police Robert Ruble:

Soon afterwards, the narrative claiming a reduction in crime had begun to develop (even as Mayor Stephenson conceded he had no idea how many residents newly became gun owners because of the law): "In 1981, the year before the ordinance was adopted, Kennesaw recorded 55 house burglaries. The next year there were 26, and in 1985 only 11."

As the news excerpt referenced above indicated, a drop in homicides owing to a mandatory gun ownership law would be difficult to measure, as the number of murders that took place in Kennesaw the year prior to the law's implementation was zero and therefore could drop no lower. And the increased number of armed robberies from 1980 (one) to 1981 (four) represented a sample so low that a subsequent reduction in such crime didn't provide any meaningful data from which a conclusion about "mandatory" gun ownership and crime rates could be drawn.

Another aspect to consider is whether Kennesaw's crime rates were observed elsewhere in the state. In the decade bracketing the law's passage (1976 through 1986) there was a significant drop in murders, burglaries, property crimes, the property crime rate, and the burglary rate in Georgia as whole (despite Kennesaw's outlier status with the gun law in question). Statewide, the murder rate similarly dropped in a fairly dramatic fashion after 1982 without a statewide law requiring gun ownership.