Did US Rep. Wear 'Kill ‘Em All' Shirt to GOP Event?

The communications director for the Colorado Republican Party told Snopes the saying is well-known as being associated with the U.S. Marines. 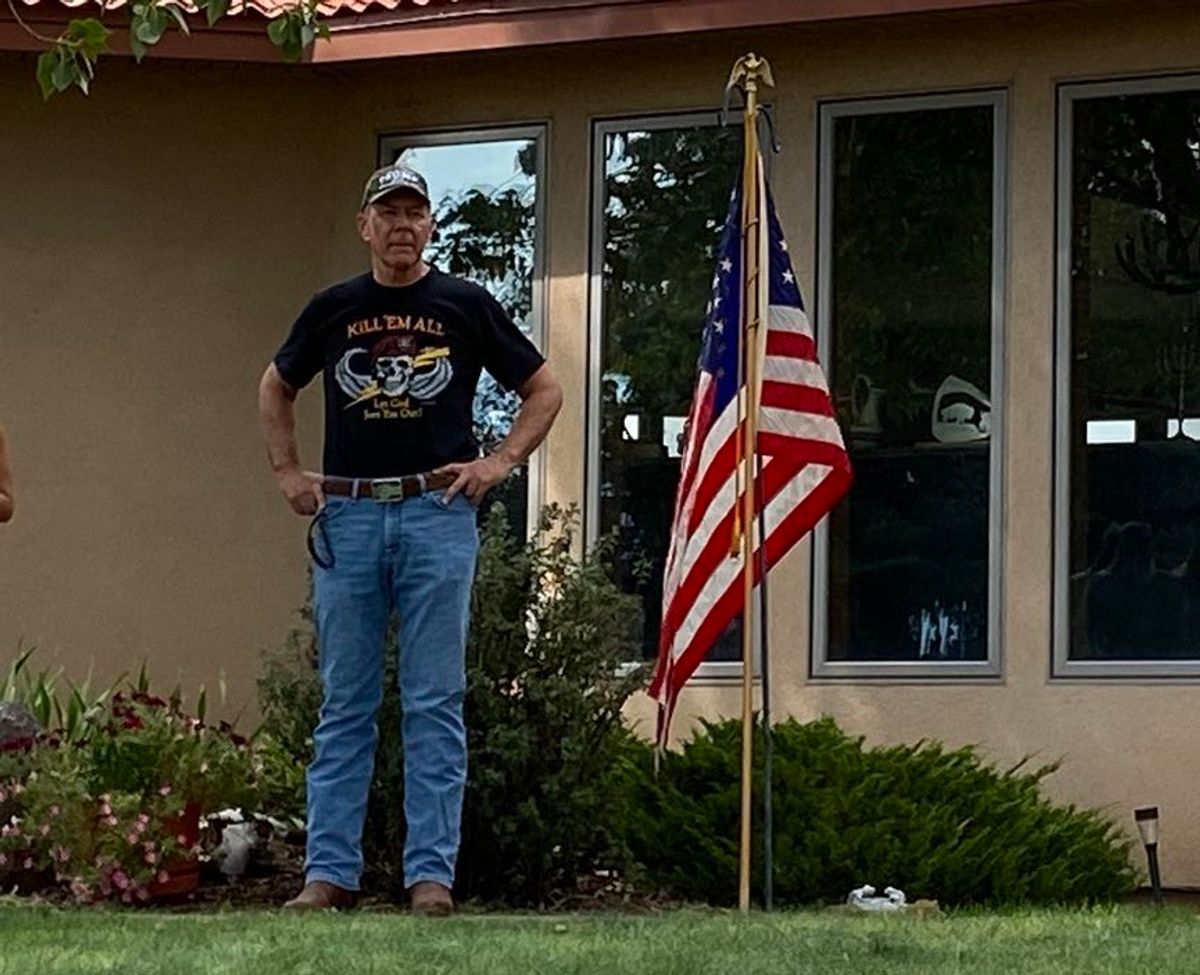 In the lead-up to the 2020 general election, the internet was rife with political memes criticizing many candidates and campaigns. Among them was a widely shared photograph of U.S. Rep. Ken Buck, a Republican from Colorado, at a September GOP event pictured wearing a T-shirt that read, “Kill ‘em all. Let God sort ‘em out.” The above meme was shared to Facebook in a post by Texas Rural Voices, a group that describes itself as rural Texans and has supported Democratic platforms.

Readers asked Snopes if the photograph of Buck's shirt was real, and it was. The images were shared by the Colorado GOP’s official Twitter account on Aug. 29, 2020, which we have archived here for reference.

"To be honest, this isn't really a story or newsworthy," Joe Jackson, communications director for the Colorado Republican Party, wrote to Snopes in an email. "The saying on the shirt is well known as being associated with the Marines and Green Berets and the t-shirt was a gift to the Congressman from his son, who is a veteran and went to West Point," he added. Jackson included links to Twitter posts shared here, here, here and here to support this claim.

The phrase, "Kill 'em all. Let God sort 'em out," reportedly comes from the Latin saying, "Caedite eos. Novit enim Dominus qui sunt eius," which translates to, "Kill them. For the Lord knows those that are His own." The Latin version of the phrase reportedly dates back to the Albigensian Crusade of the 13th century when Pope Innocent III launched a 20-year military campaign against the Cathari, a religious sect deemed heretics, that is described in an article published in the Annals of Burns and Fire Disasters. When the crusaders asked how they might distinguish true Christians from the heretics, a papal legate reportedly replied with the above phrase, according to a collection of writings known as a sourcebook that was published by Fordham University.

The U.S. Marine Corps is thought to have unofficially adopted the saying during the Vietnam War. However, Snopes was unable to independently verify whether the phrase is associated with the branch.

Some social media users argued that Buck's wearing the shirt was in bad taste after months of clashes around the nation between police forces and protesters of racial injustice. Supporters of Buck countered that his wearing of the shirt showed solitary with U.S. military forces. Buck's office did not respond to requests for comment at the time of publication.

The images were shared once again with Colorado constituents in a Sept. 1 email campaign led on behalf of Ike McCorkle, a Democrat from Colorado who is running for the state's 4th Congressional District — Buck’s seat. A spokesperson with the McCorkle campaign confirmed that the photo was taken by a photographer attending a GOP event and that to the best of his staff’s knowledge, the image was authentic.

"The image captured of Ken Buck was from a ‘Guns and BBQ’ rally held in Grand Junction," said Samuel Banick, the communications director for McCorkle's campaign.

As for the other two candidates mentioned in the meme, Lauren Boebert, a Republican candidate for Colorado’s 3rd congressional district, has made several references to QAnon, a fringe theory that has been connected to dozens of congressional candidates. In September, U.S. Sen. Cory Gardner, who is also up for reelection, made headlines after he accused public health experts of politicizing the coronavirus pandemic.

Costagliola, Michel.  “Fires in History: The Cathar Heresy, the Inquisition and Brulology."     Annals of Burns and Fire Disasters.   30 Sept 2015.

Update [Sept. 9, 2020]: This article was updated to include a statement from the U.S. Marine Corps.