Were Kellogg's Corn Flakes Created as an 'Anti-Masturbatory Morning Meal'?

Numerous websites exaggerated the role of J.H. Kellogg's odd beliefs about sexual health in the creation of the breakfast cereal. 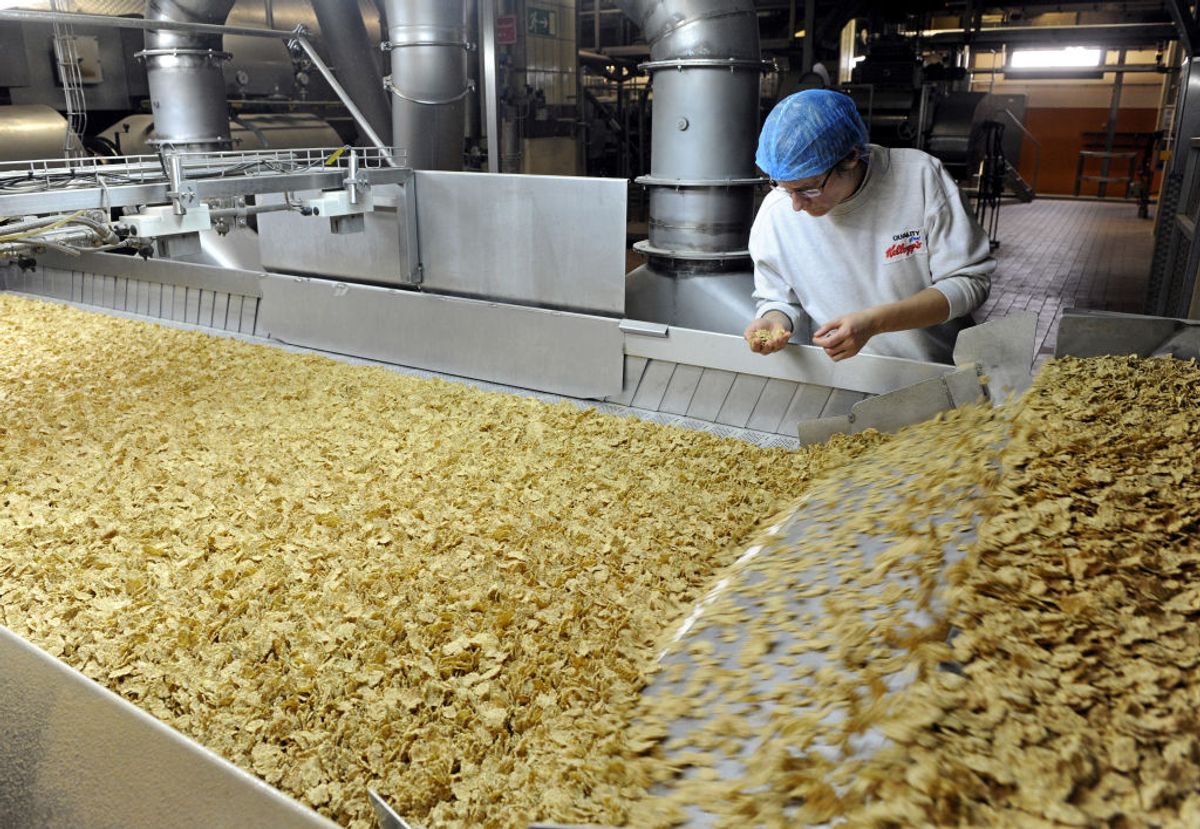 According to the available evidence, corn flakes were primarily created as an easy-to-digest, pre-prepared and healthy breakfast food, in particular for patients at the Kellogg sanitarium in Michigan. The product was never advertised as an "anti-masturbatory morning meal."

In August 2019, we received several inquiries from readers about a popular piece of purported history: the origins of the humble corn flake. The new wave of interest in the invention of the popular American cereal appears to have been prompted by Facebook and Twitter posts that encouraged readers to "Ask Google 'Why were Cornflakes invented?'":

The claim that John Harvey Kellogg created corn flakes for their supposed masturbation-suppressing qualities, and more specifically that he promoted the product as such, has been online for several years. Several sources have presented the phrase "healthy, ready-to-eat anti-masturbatory morning meal" in quotation marks, giving readers the impression that those words originated with an actual advertisement for the cereal.

In reality, the phrase was never used by Kellogg, nor was it ever used to promote or advertise corn flakes. It originated instead with a 2012 article by Mental Floss, which reported that "Kellogg developed a few different flaked grain breakfast cereals — including corn flakes — as healthy, ready-to-eat anti-masturbatory morning meals."

The origins of corn flakes

When the product was first advertised in the early 1900s, it was by then being made and marketed by the Kellogg's Cereal Company, which was run by Kellogg's younger brother Will after a rift formed between the two men, partly over the addition of sugar to the recipe (John Harvey was against it; Will was for it).

However, the Kellogg company also highlighted the flakes' "delicious flavor and dainty crispness" and encouraged consumers to indulge themselves, claiming the cereal would appeal to their "sweet tooth" and describing corn flakes as "good for you no matter how much you eat."

The supposed anaphrodisiac purpose of corn flakes also did not appear in John Harvey Kellogg's patent application in 1895. There, he instead emphasized the flakes' purported health benefits, describing them as being "well adapted for sick and convalescent persons":

My invention relates to an improved alimentary product and to the process of making it; and the object of the improvement is to provide a food product which is in a proper condition to be readily digested without any preliminary cooking or heating operation, and which is highly nutritive and of an agreeable taste, thus affording a food product particularly well adapted for sick and convalescent persons.

According to Howard Markel, a professor of the history of medicine at the University of Michigan and author of a book on the Kellogg family, the initial impetus for the invention of corn flakes came from the need to create a breakfast food that countered indigestion, a common health complaint in later-19th-century America, while also conforming to the strict vegetarian diet of the Seventh Day Adventist church, of which the Kelloggs were active members:

It was during medical school when a time-crunched John, who prepared his own meals on top of studying round the clock, first began to think about creating a nutritious, ready-to-eat cereal ... One of the most common medical complaints of the day was dyspepsia, the 19th-century catchall term for a medley of flatulence, constipation, diarrhea, heartburn, and “upset stomach.”

Breakfast was especially problematic. For much of the 19th century, many early morning repasts included filling, starchy potatoes, fried in the congealed fat from last night’s dinner. For protein, cooks fried up cured and heavily salted meats, such as ham or bacon. Some people ate a meatless breakfast, with mugs of cocoa, tea, or coffee, whole milk or heavy cream, and boiled rice, often flavored with syrup, milk, and sugar. Some ate brown bread, milk-toast, and graham crackers to fill their bellies. Conscientious (and frequently exhausted) mothers awoke at the crack of dawn to stand over a hot, wood-burning stove for hours on end, cooking and stirring gruels or mush made of barley, cracked wheat, or oats.

It was no wonder Dr. Kellogg saw a need for a palatable, grain-based “health food” that was “easy on the digestion” and also easy to prepare. He hypothesized that the digestive process would be helped along if grains were pre-cooked — essentially, pre-digested — before they entered the patient’s mouth. Dr. Kellogg baked his dough at extremely high heat to break down starch contained in the grain into the simple sugar dextrose. John Kellogg called this baking process dextrinization. He and Will labored for years in a basement kitchen before coming up with dextrinized flaked cereals — first, wheat flakes, and then the tastier corn flakes. They were easily-digested foods meant for invalids with bad stomachs. [Emphasis is added].

So the best available evidence shows that Kellogg's Corn Flakes were created, patented, and marketed as a healthy, easy-to-digest cereal that would supposedly be appealing and of benefit to everyone, but in particular people with especially sensitive stomachs. The purpose of dampening masturbatory or sexual urges appears to have played no direct role in the origins of corn flakes.

However, an indirect link exists between the now-iconic American cereal and John Harvey Kellogg's own eccentric (and at times downright frightening) views about sexual health.

'A simple, pure and unstimulating diet'

Kellogg encouraged strict abstention from almost all forms of sexual activity or contact, even among married, heterosexual couples. He outlined these views in an 1887 book entitled Plain Facts for Old and Young: Embracing the Natural History and Hygiene of Organic Life, which was reprinted and updated several times and enjoyed significant popularity in the United States around the turn of the 20th century.

He also listed several purported "cures" and "treatments" for the practice, one of which related to diet. Kellogg believed a strong, direct link existed between the food and drink one consumed and the thoughts and urges one had. He outlined in the book what he described as "the most simple, pure and unstimulating diet" as a means to prevent or bring to an end a tendency towards masturbation: "A man that lives on pork, fine-flour bread, rich pies and cakes, and condiments, drinks tea and coffee, and uses tobacco, might as well try to fly as to be chaste in thought."

Kellogg laid out five recommendations for the "simple, pure and unstimulating diet," urging readers to:

In particular, we know that Kellogg and his brother were interested in creating an easy-to-digest, healthy, pre-prepared breakfast; and we know corn flakes certainly weren't advertised as an "anti-masturbatory morning meal," contrary to the false claims of multiple online articles.

TheRock.net.nz.   "Corn Flakes Were Invented to Prevent Dudes from Jacking Themselves Off."     2 March 2018.