Did Obama's Portraitist Paint an Image of a Black Woman Holding the Severed Head of a White Person? 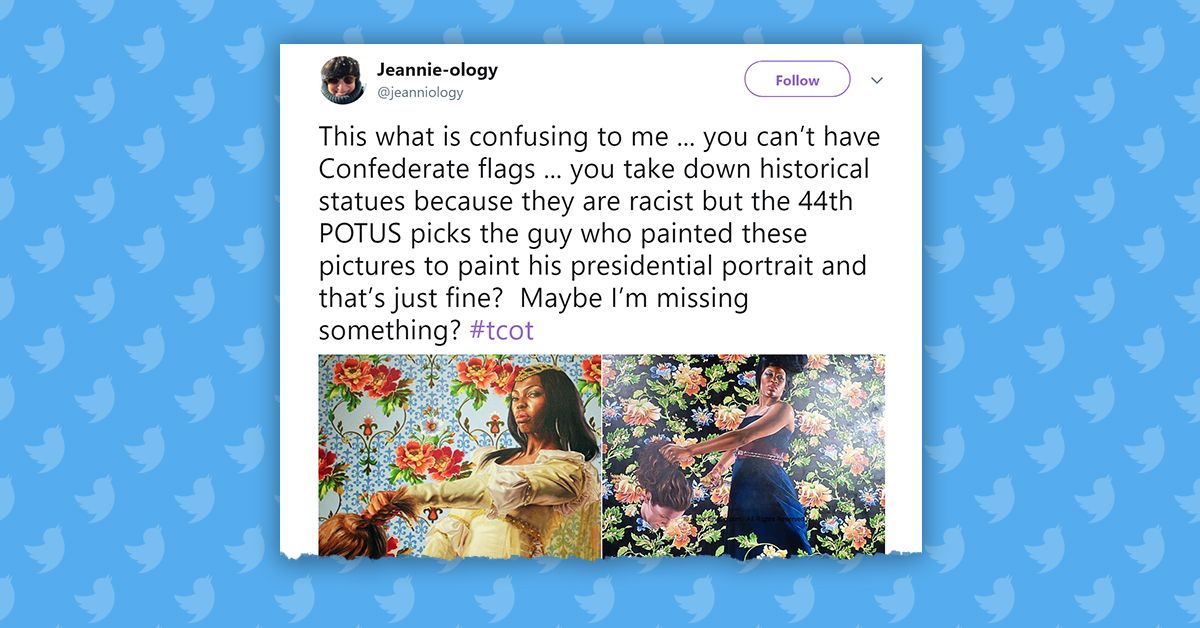 The unveiling of former President Barack Obama's official portrait on 12 February 2018 also introduced many Americans to artist Kehinde Wiley for the first time as well, as opening the door to late-breaking controversy over some of Wiley's earlier work.

Wiley, who has described his own visual style as "bombastic, syrupy, and garish," is celebrated in the contemporary art world for his large-scale portraits of black and brown men and women striking heroic poses modeled on those of aristocrats in classic European paintings.

Two portraits in particular, both of them modern takes on the biblical story of Judith beheading Holofernes and featuring elegantly-dressed black women brandishing the severed heads of white women, suddenly turned controversial in the context of Wiley's new role as a presidential portraitist. Images of the paintings were shared on social media with comments stating or implying that their content is racist:

This what is confusing to me ... you can’t have Confederate flags ... you take down historical statues because they are racist but the 44th POTUS picks the guy who painted these pictures to paint his presidential portrait and that’s just fine? Maybe I’m missing something? #tcot pic.twitter.com/9RhYCGPQK7

In a post on right-wing blog TheGatewayPundit.com, Kehinde Wiley was described as being "known for" and "having a great fondness for" painting black people beheading white people:

Both beheading pieces are titled “Judith beheading Holofernes”, referencing a story in the Book of Judith, which involves a beautiful woman who seduces an invading general before he is able to destroy their land, gets him drunk, and then decapitates him.

Typical artists from the Rennaissance [sic] era have placed Judith in the role of a scriptural savior, “a type of the praying Virgin or the church or as a figure who tramples Satan and harrows Hell.” Given the historical context and how Wiley recreated it in his works, is hard to interpret his use of this theme as anything other than a blatant statement of racism; black women are the powerful angels of the earth, conquering the white devils.

Can you imagine for a second if George W. Bush, or any other former president, decided on a painter who was famous for depicting white people killing black people to paint his official portrait? It’s hard to imagine, right? Yea, that’s because it’s disgusting and backward.

It is not the case, however, that Wiley was "famous for depicting black people killing white people" before politically motivated commentators chose to make it so. Far from it. Of the scores of paintings the artist has produced, only the two based on the biblical beheading story depict such a scene. They generated very little controversy before Wiley's portrait of Obama was publicly unveiled.

That the strong, couture-clad black females in the paintings are depicted in the immediate aftermath of decapitating white women is not incidental. As with many works of art, this was meant to be provocative ("I think at its best what art is doing is setting up a set of provocations," Wiley said in a 2015 interview).

A 2012 article on the web site of the North Carolina Museum of Art (NCMA) supplies some needed context:

Known for his monumental portraits of young black men, placed in historical poses and settings appropriated from Old Master paintings, Kehinde Wiley critiques the racism of art history while also commenting on contemporary street culture and masculine identity. Reinventing classical portraiture and questioning who is represented in the portraits found in museums worldwide, Wiley states, “The whole conversation of my work has to do with power and who has it.”

Judith and Holofernes is from Wiley’s most recent body of work and his first series of paintings to feature female subjects. Wiley uses “street casting” to find his models — walking city streets and asking ordinary people if they would pose for a portrait. He met the model for this painting, Treisha Lowe, at Fulton Mall, a pedestrian shopping street in downtown Brooklyn. This painting references a specific art-historical work, a 17th-century painting by Giovanni Baglione, Judith and the Head of Holofernes (1608). The subject is taken from the apocryphal Old Testament Book of Judith, in which a Jewish town is under attack by the Assyrian army led by the general Holofernes. Judith, a widow from the town, goes to Holofernes under the pretense of helping him defeat the Jews. After he falls asleep, she cuts his head off with his own sword, and the town defeats the army. Wiley translates this image of a courageous, powerful woman into a contemporary version that resonates with fury and righteousness.

"It’s sort of a play on the 'kill whitey' thing,” Wiley said in a 2012 interview with New York Magazine. The operative word is "play."  What is all too easy to miss on a cursory glance is the deeply conceptual nature of these works. We turn again to the NCMA's commentary:

Wiley takes obvious artistic license with the story — Holofernes is represented by a woman’s head, and Judith wears a gown designed by Riccardo Tisci of Givenchy. This new rendition can be interpreted on many different levels, including racial and gender identity and inequity, the representation of women throughout art history, and society’s ideals for beauty. In Wiley’s words, “I am painting women in order to come to terms with the depictions of gender within the context of art history. One has to broaden the conversation . . . This series of works attempts to reconcile the presence of black female stereotypes that surrounds their presence and/or absence in art history, and the notions of beauty, spectacle, and the ‘grand’ in painting.”

In contrast to the blunt literalism of those who prefer to interpret these paintings as a celebration of racial violence, art critic Walter Robinson writes that Wiley's take on Judith and Holofernes "suggests, with a jovial brutality, that Judith would prefer to be done with white standards of beauty."

If, as Wiley has said, his intent as an artist is to be provocative, he can consider himself successful.

We reached out to Mr. Wiley for comment, but did not receive a reply.