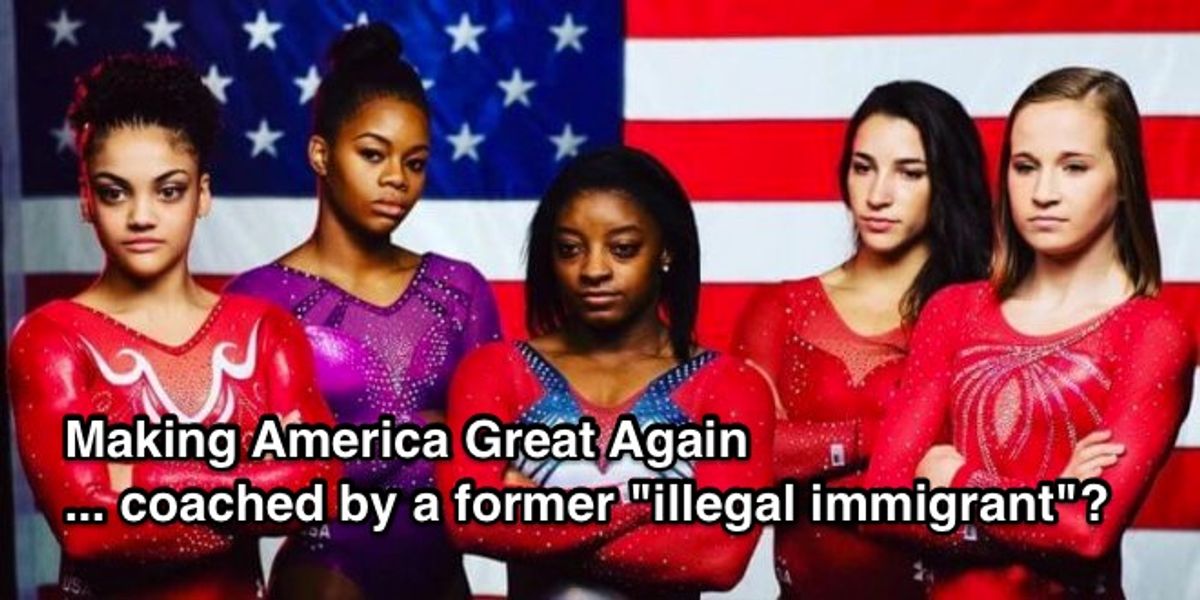 Amid an impressive series of performances by the U.S. women’s gymnastics team during the 2016 Summer Olympics in Rio de Janeiro, coach Marta Karolyi and her husband Bela were the subjects of frequent headlines, including a 12 August 2016 profile that credited them with transforming the United States' global standing in the gymnastics world:

[Gymnastics] wasn't traditionally a sport the U.S. dominated. The American women didn't win their first team gold until 1996. But they have now captured the team title at the last two Olympics, and American women have won the individual all-around at the last four Summer Games.

It's fitting that the current team has nicknamed itself the "Final Five," a tribute to leader Marta Karolyi, 73, who is stepping down after the Rio Games. She and her husband, Bela, have been towering figures in the world of gymnastics since the 1970s.

They first rose to prominence in their native Romania where they trained the country's first wave of superstar gymnasts, including Nadia Comaneci, who scored the sport's first perfect 10 and took gold at the 1976 Olympics.

The Karolyis defected to the U.S. in 1981 and have helped transform the American women into the world's best.

The Romanian couple were also subjects of rumors claiming that they were "illegal immigrants" to the U.S.:

On or around 11 August 2016, popular Twitter account @OMGFacts retweeted a subsequently viral iteration of the claim the Karolyis emigrated to the United States under less than legal circumstances:

The above example references Donald Trump's campaign slogan ("Make America Great Again") and appears to critique his controversial stances on immigration, suggesting that immigrants of (initially) dubious status have been responsible for years of American success at the Olympics. The tweet clearly had impact (it was shared by tens of thousands of users), but its claims were misleading,

The circumstances under which Bela and Marta Karolyi emigrated from Romania to the United States are well documented but possibly unfamiliar to younger audiences. In their native Romania, the couple coached legendary gymnast Nadia Comăneci, who at the age of 14 achieved the first perfect 10 gymnastics score in Olympic history during the 1976 Summer Olympics in Montreal. In 1981, the Karolyis embarked on what was intended to be an exhibition tour of the United States before a planned return to Romania, but (ostensibly) on a whim, the Karolyis (along with companion and choreographer Geza Pozsar) decided to defect and seek asylum in the United States due to increasing political pressure in their native Romania:

The [Karolyis] breaking point came in March '81, during an exhibition tour of the U.S. by the Romanian team. Secret police accompanied the delegation, clumsily disguised as masseurs and journalists, and Karolyi found himself under increasing pressure to toe the party line. The leader of the Romanian gymnastics federation, Nicolai Vieru, made it clear to Karolyi that the coach was suspected of intending to defect. Fearful of reprisals upon their return to Romania, Bela and Martha did just that. On the last day of the tour, March 29, accompanied by team choreographer Geza Pozsar, they walked out of their hotel and disappeared into the crowded streets of New York City. It was the beginning of a wrenching odyssey.

"We just decide, suddenly," says Karolyi. "We haven't been prepared. We had not saved any money. We had even bought a big stuffed bear to bring home to Andrea." Andrea, their seven-year-old daughter, had stayed behind in Romania with an aunt, and now Bela and Martha had no way of contacting her. They carried her bear with them into the street.

After a week, with the help of other èmigrès, he and Martha contacted the State Department and applied for official asylum, which was eventually granted. Although their defection made the newspapers, no one in the gymnastics community contacted Karolyi, and after the initial swirl of publicity, he and Martha were left to fend for themselves. An acquaintance named Les Sasvari, an expatriate Hungarian coach living in the U.S., helped pay their way to Los Angeles. California, Sasvari told them, was the promised land of American gymnastics, a land of sunshine, gyms and jobs. A friend of Sasvari's worked as a manager at the Beverly Wilshire Hotel, and there, improbably, Bela and Martha stayed for free for several days. Karolyi, English phrasebook in hand, called every gymnasium in the Los Angeles phone book, offering his services. There were no takers.

Seeking political asylum is very different from what Americans often term "illegal immigration," as the latter typically involves those who unlawfully sneak into the United States at unguarded border crossings or who enter the country on temporary tourist visas but unlawfully decline to leave at the end of the allotted visitation timeframe. By contrast, individuals eligible for asylum (codified in the Immigration and Nationality Act of 1952) are described legally as "generally people outside of their country who are unable or unwilling to return home because they fear serious harm."

Persons claiming such status must demonstrate the condition of serious risk upon return to their home countries and bear the burden of proof to successfully secure asylum, and those who apply for asylum in the United States are legally authorized to remain in the country while their cases are pending, so at no point could the Karolyis have realistically been considered "illegal immigrants."

In January 1982, the New York Times reported that the Karolyis secured the help of lawmakers in retrieving their daughter from Romania as their application for political asylum was being processed:

Karoyli, the man who coached Nadia Comaneci to her gold-medal success at the 1976 Montreal Olympics, and Rumania to a team title at the 1979 world championships, defected to the United States with his wife, Martha, and Geza Pozsar, the top choreographer for the Rumanian national team.

Eventually, the Karolyis were reunited with their 8-year-old daughter, Andrea, early in September through the efforts of Representative Bill Archer, Republican of Texas. Andrea had been in Rumania with an aunt.

Karolyi had left Rumania, he said, because he believed the gymnastics federation there was trying to use his success and the gold-medal emergence of Miss Comaneci and others as a political tool.

Bela and Marta Karolyi were officially granted asylum by 1983, indicating immigration authorities agreed they would have been at risk of harm had they returned to Romania in 1981. Legislative efforts were undertaken to expedite the granting of U.S. citizenship to the couple in order to allow them to take part in coaching the U.S. gymnastics team for the 1988 Summer Olympics:

Under the rules, though, Karolyi can't coach the national team without being a citizen, and, as a Rumanian whom the United States granted political asylum in 1983, he won't be eligible for citizenship until Oct. 25, 1988 — after the Seoul Games have already ended. Now, to make it possible for him to be considered for the job by the United States Gymnastics Federation, a bill waiving the usual five-year waiting period has been introduced by Senators James A. McClure, Republican of Idaho, and Alan J. Dixon, Democrat of Illinois. "There is no doubt that this citizenship will be granted; it's just a matter of when," McClure said in a Senate speech. "He has earned it. He is already a productive, patriotic American."

Karolyi later said he struggled with the decision to leave 19-year-old Nadia Comăneci behind, ultimately deciding that she was too young to fully appreciate the involved risks. Comăneci herself defected in 1989, by which point Karolyi was already an American citizen:

While Romanian gymnast Nadia Comaneci was on a tour of the United States in 1981, the two men who had the most impact on her career, her coach, Bela Karolyi, and her choreographer, Geza Pozsar, defected.

"We were about to face a very different future," Karolyi said by telephone from Stuttgart, West Germany, where he is coaching a team of U.S. women gymnasts in competition. "We had no assignments, no opportunities and no promises ... We knew that we could not guarantee that she would be taken care of better than her family could take care of her in Romania. History proved that I was right. I didn't have a regular job for six months. I took night jobs, cleaning restaurants and making pennies to carry me from one day to another ... She had to go back and finish her career as a gymnast and her education. We knew that a few years later she would be mature enough to make a decision on her own."

Only a few days past her 28th birthday, Comaneci made that decision. She crossed the Romanian border into Hungary and went to the U.S. Embassy in Vienna, where her request for political asylum was granted. Her freedom flight landed Friday in New York.

"I was always hoping that one of these days she was going to make this difficult step," Karolyi said.

The defection of Bela and Marta Karolyi from Romania to the United States in 1981 has been extensively documented in accounts of Olympic history. The couple followed legal procedure in securing a legitimate claim of asylum that allowed them to remain in the United States (and obtain U.S. citizenship), and at no point in the process were they "illegal immigrants" in America.