Did Karen Pence Fail To Wear a Mask During the VP Debate?

The second lady appeared on stage at the vice presidential debate without a mask — but that isn't the complete story. 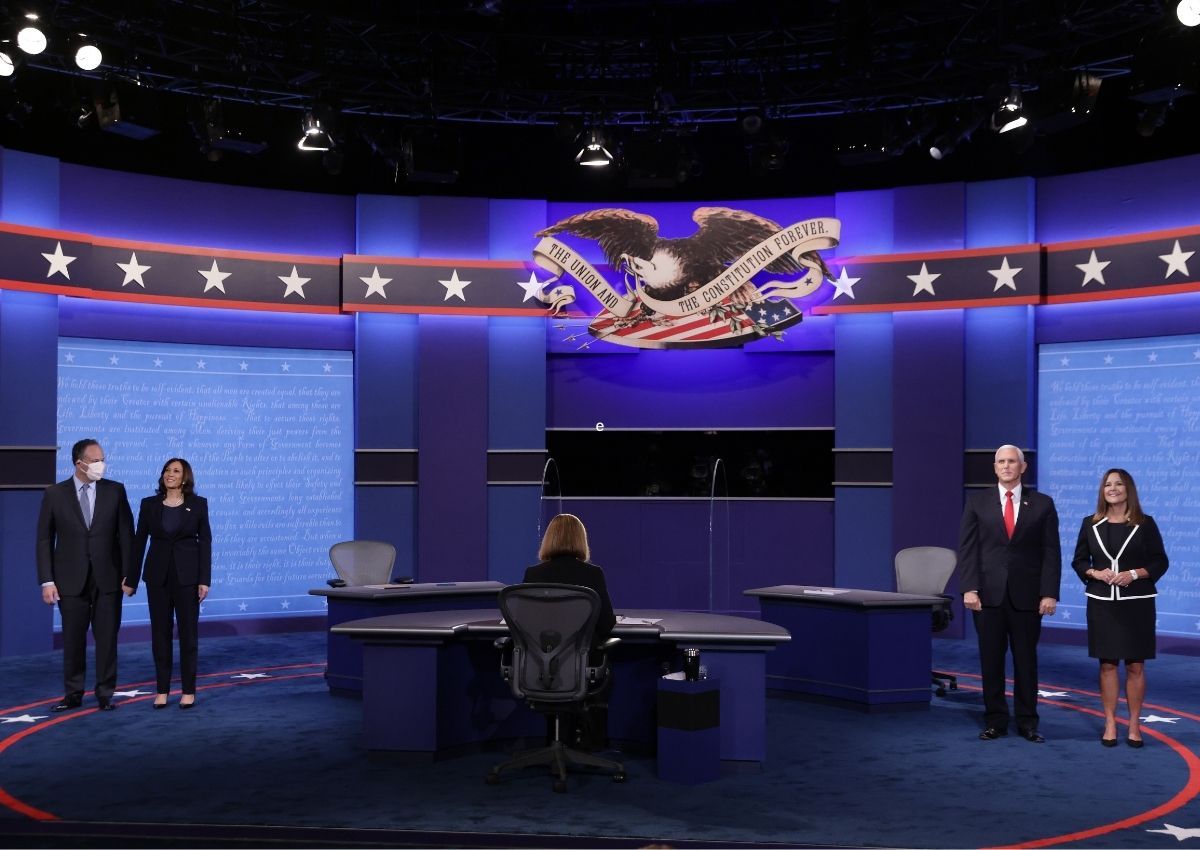 Claim:
U.S. second lady Karen Pence did not wear a mask during the vice presidential debate in October 2020.
Rating:

Karen Pence did not wear a mask when she joined Vice President Mike Pence on stage at the end of the debate.

However, Karen Pence did wear a mask while seated in the audience at the debate.

On Oct. 7, 2020, photographs and videos started to circulate on social media that supposedly showed U.S. second lady Karen Pence standing on the stage at the vice presidential debate without a mask. These images were often accompanied by the accusation that Karen Pence had violated rules implemented by the Commission on Presidential Debates, mandating that everyone in attendance at the debate wear a mask:

The above-displayed video shows genuine images from the end of the vice presidential debate when Karen Pence and Doug Emhoff joined their partners on stage. While Karen Pence did not wear a mask during this portion of the event, it appears that she was wearing a mask throughout the entire debate as she sat in the audience. A second image provided a slightly wider shot of the people sitting around Karen Pence, showing that they were wearing masks: The issue of wearing a face mask during the debates — something health officials have repeatedly said is key to slowing the spread of COVID-19 — became part of the national conversation following the first presidential debate, when members of U.S. President Donald Trump's family and staff refused to wear face masks while sitting in the audience. Frank Fahrenkopf, head of the Commission on Presidential Debates, spoke to The Washington Post shortly after the first presidential debate, saying: "The first family came in wearing masks, but they took them off. The rules said you had to wear a mask ... Everyone in that hall was supposed to keep the mask on, other than the president, Biden and Chris Wallace."

In response to the COVID-19 outbreak at the White House, and with growing concern about the safety of the debates, the commission said that they would be more vigilant in enforcing the mask rules at the vice presidential debate. Fahrenkopf addressed the crowd before the start of the vice presidential debate, saying: "You were told when you entered here that you had to have your mask on. And the rules are that you will keep your masks on."

On Oct. 9, a spokesperson for the second lady released a statement claiming that both campaigns had agreed that spouses would be allowed to remove their masks when they appeared on stage at the end of the debate.

Kara Brooks, the communications director for the second lady, said:

"Second Lady Karen followed an agreement established between both campaigns prior to the debate ... Both sides agreed that the spouses would remove their masks when they walked onto the stage at the end of the debate.”

We reached out to the Commission on Presidential Debates and the Biden campaign for comment and will update this article if more information becomes available.