Is This 'Karen' Halloween Costume Real?

T-shirts supposedly read, "CAN I SPEAK TO THE MANAGER?" 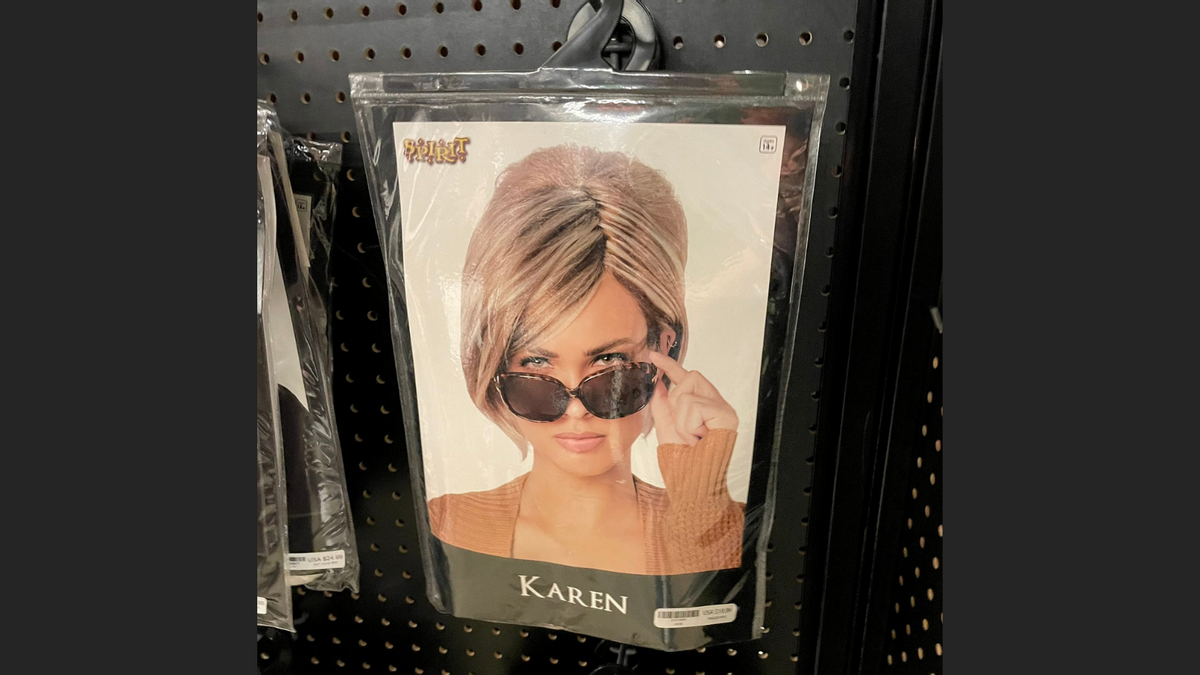 In the weeks before Halloween in 2021, the above-displayed image supposedly depicting a blonde, bob-styled wig labeled "Karen" surfaced on social media.

As Dictionary.com explains, "Karen" is a pejorative slang term to describe an entitled and often racist middle-aged white woman — "generally stereotyped as having a blonde bob haircut, asking to speak to retail and restaurant managers to voice complaints or make demands, and being an anti-vaxx, Generation X soccer mom."

We set out to determine if the wig depicted in the photograph was authentic. First, we reached out to the Twitter user who appeared to be the source of the widely shared image. We have not received a response, but we will update this report if that changes.

Next, Snopes considered the logo for Spirit Halloween, a costume retailer, in the upper-left corner of the wig's packaging in the photo. We searched the company's site, and indeed uncovered the below-displayed product. "Everyone will know you're looking to speak to the manager when you complete your Karen outfit with this hilarious Karen wig," read the product's description. "This short and stylish cut is the perfect hairstyle to show everyone you ain't the one to mess with."

As of this writing on Oct. 6, Spirit Halloween's online catalog listed the item as "sold out."

Nonetheless, considering that evidence on the retailer's website — proof that it sold "Karen" wigs to Halloween shoppers when supplies allowed — we found no reason to doubt the authenticity of the item pictured in this report's feature image.

Additionally, the retailer sold a "Can I Speak To the Manager Karen T Shirt" for $14.99, as well as "Karen" buttons for $4.99, according to its website. The 2021 Halloween season wasn't the first the retailer attempted to capitalize on the "Karen" meme. About one year earlier, Spirit Halloween used its official Facebook page to promote similar products, writing in a caption: "2020: The Year of the #Karen! #SpiritHalloween." New York Times writer Ezra Marcus even highlighted the items in an Oct. 12, 2020, story about the COVID-19 pandemic's impact on Spirit Halloween's business. "There were few visible nods to the many crises that have gripped the country this year, aside from a row of obligatory hazmat suits and a “Karen” costume — complete with a blond wig, binoculars, fake hundred dollar bills, and a T-shirt that read “CAN I SPEAK TO THE MANAGER?”

At the time of this writing, Amazon also sold similar wigs — one of which the site described as "The Karen [that] comes styled right out of the bag!" — and T-shirts for "Karen" Halloween costumes.

Considering that evidence, as well as the proof outlined above, we rate this claim "True."

“Here’s How Karen Became The Name All Over The Internet.” Dictionary.Com, https://www.dictionary.com/e/slang/karen/. Accessed 6 Oct. 2021.