Did Kanye West and Kim Kardashian Crash a Jet Ski in This Video?

The video first made the rounds in 2014. 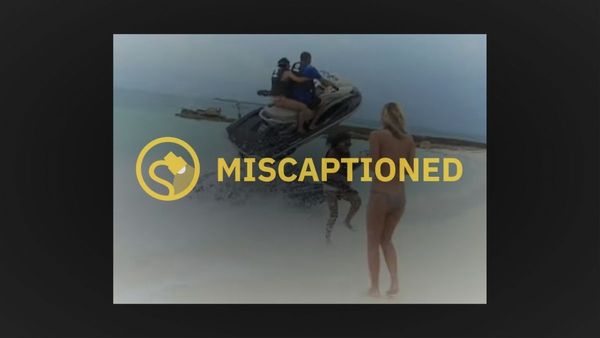 In April 2021, a video went viral on TikTok that supposedly showed Kanye West and Kim Kardashian crashing a Jet Ski:

This video, which has been viewed more than 10 million times as of this writing, is real. However, the famous couple was not involved.

The video first went viral in 2014. Several news outlets wrote about the incident at the time, but it was never reported that "Kimye" was involved.

The video was reportedly filmed by Brian Prahl as he celebrated his birthday in the Bahamas. Prahl wrote in his original post:

This is a wreck that I caught out of the corner of my eye while shooting two girls that were taking photos of each other before going on a jetski ride. As I panned to my left, and saw this other crazy jet ski guy literally jump her jet ski like a ramp.

She had the craziest instinct to get off of the jetski at the last second to save her head literally. The couple on the other jetski went flying into the sand after flying super high in the air. I was like 'hooolllyyy shhiit' at the ending as I could not imagine what I had captured, and thank god no one was hurt in the end."

Although we haven't been able to find too many details about this video, it certainly does not feature West or Kardashian.