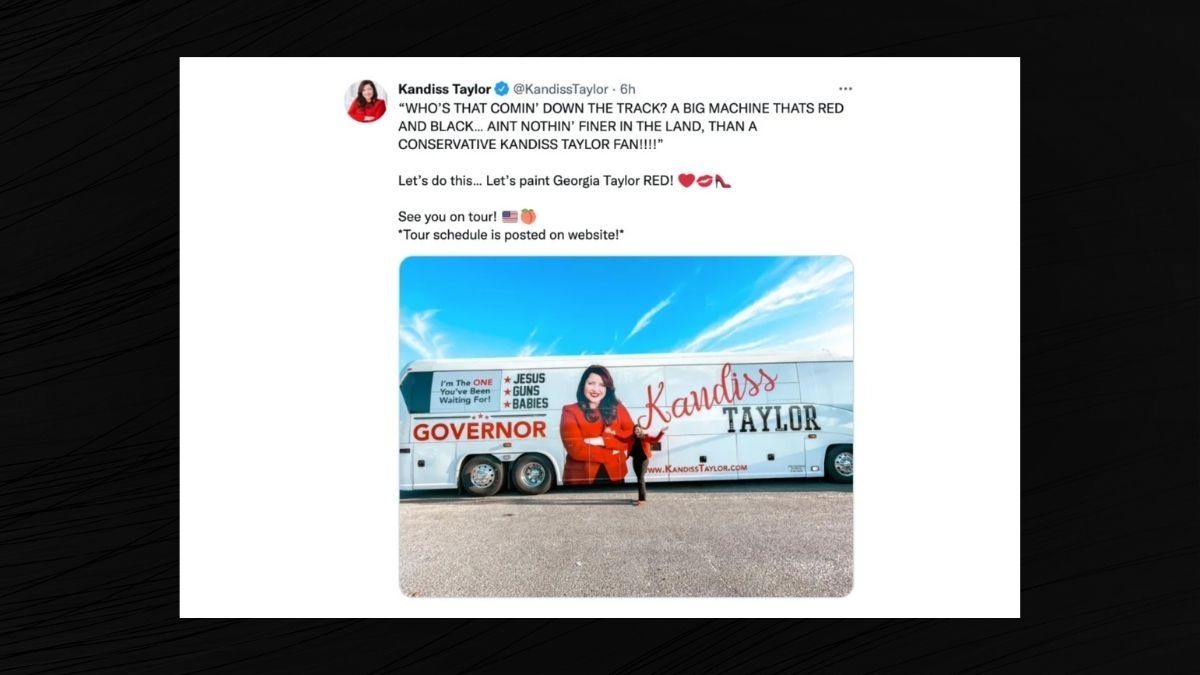 Political hopeful Kandiss Taylor, who is vying to be elected Georgia governor, launched her campaign tour on Feb. 17, 2022, and quickly shot up as a trending twitter topic after the GOP candidate was pictured alongside the words, “Jesus, guns, babies.”

The campaign slogan appears to have been first made prominent by political analyst Arieh Kovler, who said on Twitter that the phrase was “a hell of a campaign slogan.”

A look on Taylor’s official website proved that her campaign slogan indeed read, “Jesus, guns, and babies” with the added verbiage, “morality over money!”

A scroll through the South Georgia native’s website also showed that she has served as an educator in the public school system for 19 years as a third-grade teacher, school counselor, testing coordinator, student-services coordinator, and homeless liaison.

“The welfare, education, and safety of our children are of utmost importance to me. I want to see the focus of our government move to issues that matter and impact our daily life. It's time to move away from the manipulation of special interest groups. Money and power have no place in influencing our public servants,” wrote Taylor.

According to her website, those issues include a pro-life platform centered around gun rights, election reform, immigration, the economy, and education. Her website further read:

She is passionate about the working class, mental health, less government overreach, education, small business growth, gun rights, our farmers, the economy, right to life, and election integrity. Put simply, Jesus, Guns, and Babies! When asked what made her decide to run, she responded, “I can’t complain about what is going on if I’m not willing to do something about it. The Governor's budget is 60% education, and who better to clean things up than a public school educator who knows where and what to cut!”

Taylor took to social media on Feb. 17 to announce her three-day campaign launch, “The Paint Georgia Red Bus Tour,” which features her “Jesus, guns, babies” slogan painted in bold letters outside of her campaign vehicle. As of this writing, tour dates past Feb. 19 were not made public.

Snopes contacted Taylor for further elaboration on her campaign platform. We will update the article accordingly if we hear back.