Following the announcement of Biden's 2020 running mate choice, critics seized on a past exchange between him and the U.S. senator. 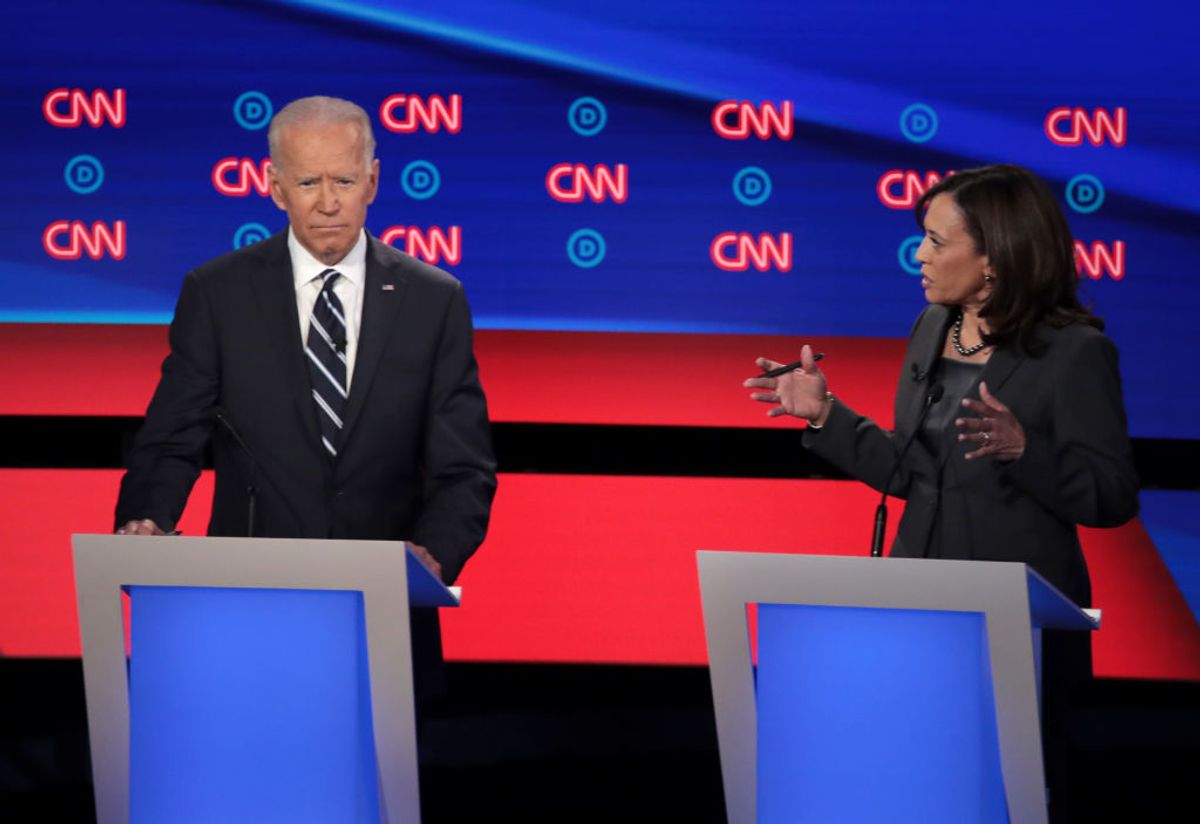 On Aug. 11, 2020, U.S. Democratic presidential candidate Joe Biden announced that Sen. Kamala Harris would be his running mate. Soon thereafter, Katrina Pierson, the senior advisor to President Donald Trump's 2020 campaign, released a statement claiming that Harris had accused Biden of being a racist.

The statement read in part: "Not long ago, Kamala Harris called Joe Biden a racist and asked for an apology she never received."

This talking point was picked up by several other Biden critics and Trump supporters. The Daily Caller and Fox News also shared video that supposedly showed the moment that Harris called Biden racist.

This claim stems from a moment during the first Democratic primary debate in June 2019. Mayor Pete Buttigieg of South Bend, Indiana, was asked about his low support among Black voters, a recent shooting, and why the South Bend Police Department had so few Black officers. After Buttigieg's response and some back and forth between the other candidates, Harris took control of the floor and turned the conversation toward Biden.

Harris criticized Biden for remarks he made earlier that week about how he was able to work with late Sens. James O. Eastland of Mississippi and Herman Talmadge of Georgia, despite their staunch opposition of desegregation. Harris also criticized Biden for opposing busing policies aimed at integrating schools in the 1970s.

While Harris' comments certainly focused on race relations in the United States, the claim that the senator called Biden a racist is undercut by how Harris prefaced her remarks, in which she explicitly said: "I do not believe you are a racist."

Here's a transcript of Harris' full comment [emphasis ours]:

So, on the issue of race, I couldn’t agree more that this is an issue that is still not being talked about truthfully and honestly. I—there is not a black man I know, be he a relative, a friend or a coworker who has not been the subject of some form of profiling or discrimination. Growing up, my sister and I had to deal with the neighbor who told us her parents couldn’t play with us because she—because we were black. And I will say also that—that in this campaign, we’ve also heard—and I’m going to now direct this to Vice President Biden. I do not believe you are a racist and I agree with you when you commit yourself to the importance of finding common ground.

But, I also believe—and it’s personal. And I—I was actually very—it was hurtful to hear you talk about the reputations of two United States senators who built their reputations and career on segregation of race in this country. And it was not only that, but you also worked with them to oppose bussing. And you know, there was a little girl in California who was part of the second class to integrate her public schools and she was bussed to school every day and that little girl was me. So, I will tell you that on this subject, it cannot be an intellectual debate among democrats. We have to take it seriously. We have to act swiftly. As attorney general of California, I was very proud to put in place a—a requirement that all my special agents would wear body cameras and keep those cameras on.

Biden pushed back, saying that this was a mischaracterization of his record and that he didn't oppose the practice of busing, but a federal law requiring the practice. Biden also argued that he had a long history of supporting civil rights.

Here's a video of the exchange from NBC News:

Although Harris truly criticized Biden for working with senators who supported segregation and for backing an anti-busing policy that arguably delayed integration, she did not call Biden a racist. In fact, Harris prefaced her remarks by saying, "I do not believe you are a racist."