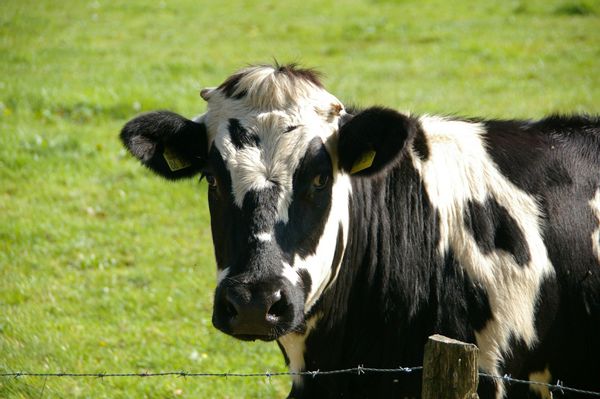 Claim:
A K-9 dog bit a cow, prompting a deputy to tase the K-9, and the cow then kicked the deputy.
Rating:

It's true that all three things happened in South Carolina in January 2020. However, one picture that often accompanied the story was from an unrelated incident in Germany in 2016.

On May 13, 2021, Twitter user @sticky_ssb shared a headline describing a strange series of events: A K-9 dog bit a cow, a deputy then tased the K-9, and the cow kicked the deputy.

It's true that all three of these things happened between a police dog, a cow, and a deputy.

However, a picture that had often accompanied this headline was unrelated to the incident.

The strange series of events took place in January 2020 in Georgetown, South Carolina. According to WSPA-TV, the Georgetown County Sheriff's Office said at the time that one of its deputies responded to a possible burglary at around 4:00 p.m.:

A cow near the scene distracted the dog which led to the dog biting the cow.

To deescalate the situation, the deputy tased the dog.

The cow was spooked and “struck the deputy and the property owner,” resulting in minor injuries, according to GCSO.

The burglary call reportedly "proved to be unfounded."

As for the picture in the viral tweet, which has also appeared on meme-filled comedy websites, it had nothing to do with the 2020 incident in South Carolina.

The photograph of the police officer and the cow was from an unrelated story that took place in Germany from 2016. Its caption read as follows:

Forces of the police and the fire brigade hunt down a cow between Erfurt-Schmira and Erfurt-Bischleben, Germany, 9 March 2016.

The cow apparently ran away from her stall in Schmira, over a field, and into a garden. Here, the animal was narcotised by a veteranian using a rifle.

After being shot, the cow ran towards the policemen but did not hurt anybody. Photo: Martin Wichmann/dpa

In sum, it's true that a K-9 dog bit a cow, prompting a deputy to tase the K-9, and the cow kicked the deputy. It happened in January 2020 in South Carolina.