A 2006 photograph shows Behar and Williams cutting up with fellow comedians Billy Crystal and Whoopi Goldberg. 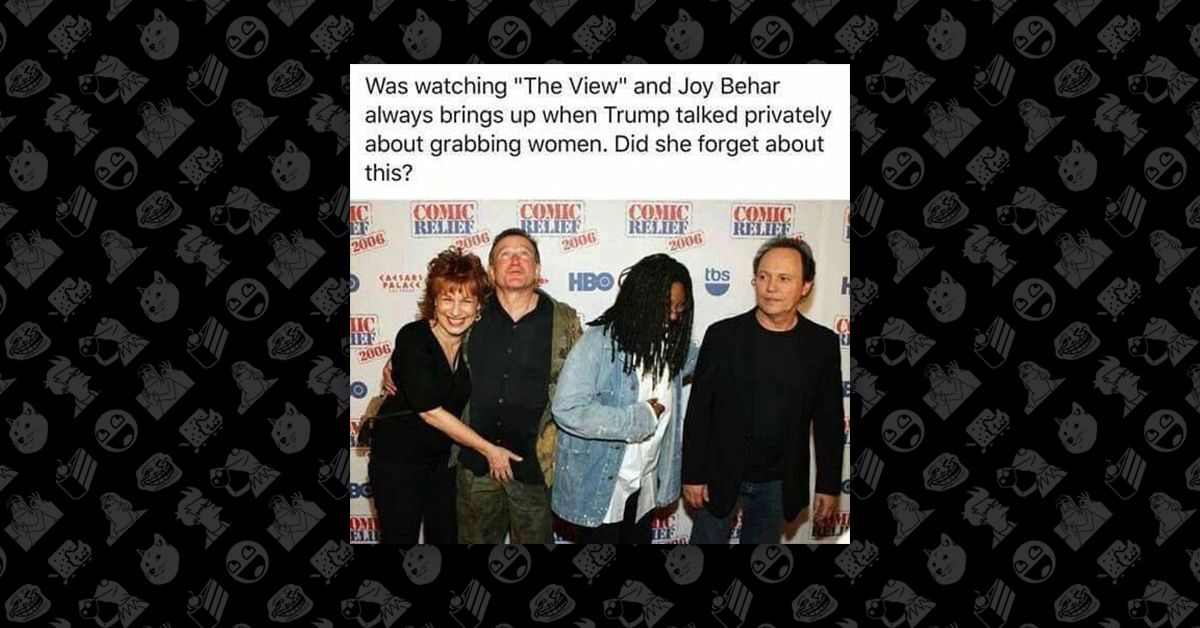 In late November and early December 2017, an image circulating on Facebook showed four comedians, Joy Behar, Robin Williams, Whoopi Goldberg and Billy Crystal on the red carpet at the 2006 Comic Relief, which as a comedy show put on for charitable causes. In the photograph, Behar has her hand on Williams' groin.

The picture was circulated because Behar, who along with Goldberg is a co-host of the ABC talk show "The View," has been vocal in her criticism of President Donald Trump and allegations against him of sexual misconduct by multiple women. A meme circulated on Facebook promotes an opinion that because of what she was doing in the photograph Behar's criticism of the president is hypocritical: The image prompted some readers to ask if it was doctored to make it appear Behar was groping William's crotch but it was not. The picture is authentic. The two comedians discussed the picture when Behar interviewed Williams on the HLN network, as seen in this video posted to the official HLN YouTube page in 2011:

In the exchange, Behar tells Williams:

I took a picture with you one time that if that got out, look at this picture... I forgot that I did that, I molested you at Comic Relief.

A photographer from the Getty Images wire service captured a similar image from the same event, which can be seen by clicking and scrolling through images here.

Williams committed suicide in 2014, so there's no way to ask whether he was on board with the photograph. Despite his great success in delighting children with roles in "Mrs. Doubtfire" and "Aladdin," the prolific comedian was known for ribald humor. Actor Pierce Brosnan, who co-starred with Williams in the 1993 movie "Mrs. Doubtfire" described an episode during filming when Williams went off script and improvised material far dirtier than what was written:


And so, although the photograph is authentic, criticism of Behar neglects to mention that Williams never lodged complaint—and later joked with her about it publicly. Behar is also not a public official (let alone the president of the United States), nor was she ever in a position of power or authority over Williams, one of the era's most successful and well-known comedians.

While the meme tries to draw a comparison, the reality is that President Donald Trump has been accused by more than a dozen women of sexual misconduct and assault, including women and girls who said he walked into dressing rooms when they were nude during beauty pageants he ran and a contestant on his NBC reality show "The Apprentice" who accused him of kissing and groping her in a hotel room without her consent.

Rayner, Karly.   "Robin Williams Snuck These 7 Surprisingly Rude Jokes Into Your Favorite Kids' Movies, But Were You Too Innocent to Notice Them?"     MoviePilot.com.   3 September 2015.