Did John Wilkes Booth’s Brother Save the Life of Abraham Lincoln’s Son?

Edwin Booth was a renowned actor just like his brother. 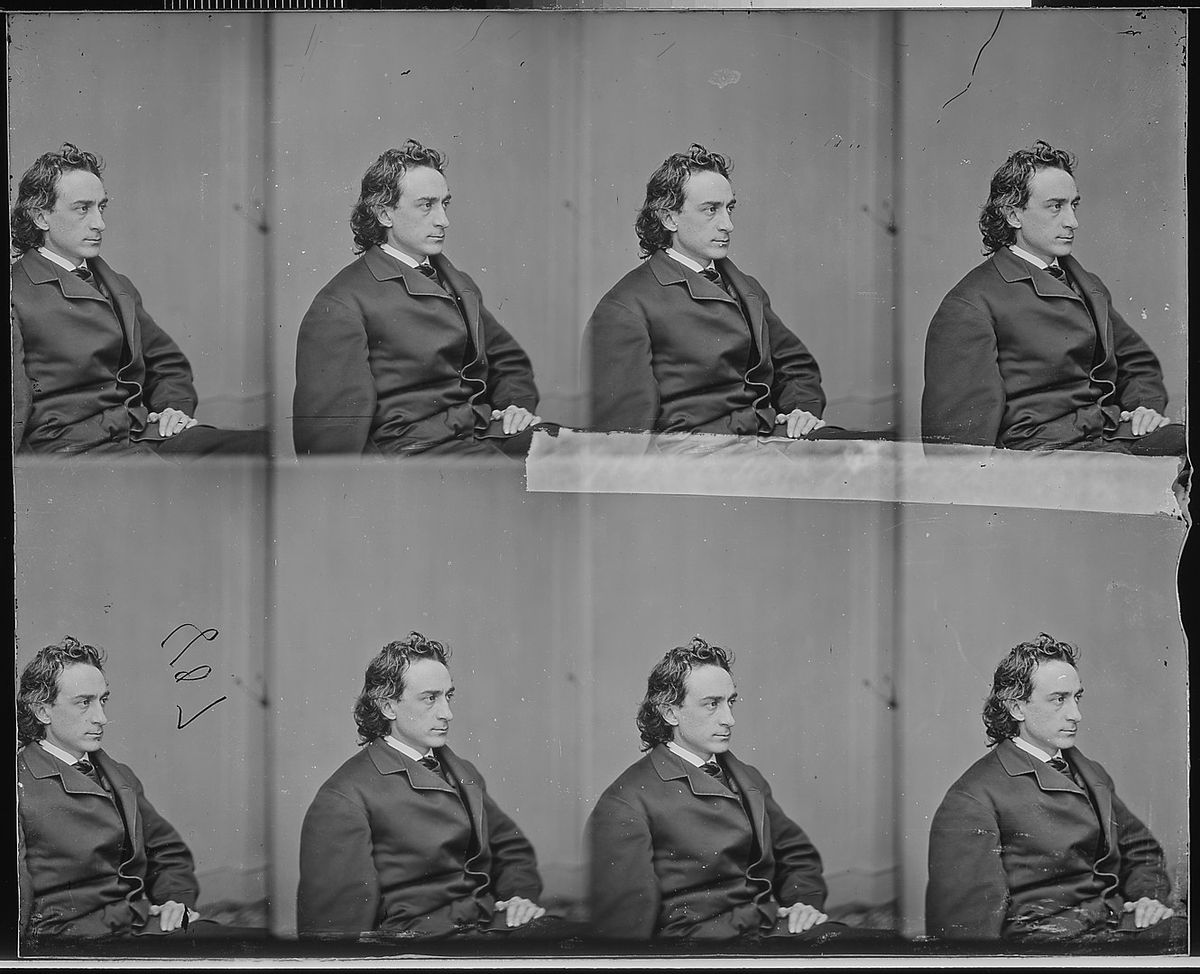 A major historic tragedy came with an odd and unsettling coincidence attached to it. Few know that the brother of the assassin of U.S. President Abraham Lincoln was responsible for saving the president's son, Robert Todd Lincoln, from a near-death experience.

Robert's rescuer was Edwin Booth, the brother of John Wilkes Booth. The latter would go on to kill the president in 1865. Edwin Booth was himself a renowned stage actor who would be "overshadowed" by the infamy of his younger actor brother.

According to the Library of Congress, Edwin Booth saved Lincoln's son from being run over by a train car. The event is detailed in a Cleveland Morning Leader news story in April 1865, written after the death of the president, and praising Edwin Booth for his support of the Union cause during the Civil War:

An incident–a trifle in itself–may be recalled at this moment when the profound monotony of grief overwhelms us. Not a month since, Mr. Edwin Booth was proceeding to Washington. At Trenton there was a general scramble to reach the cars, which had started leaving many behind in the refreshment saloon. Mr. Edwin Booth was preceded by a gentleman whose foot slipped as he was stepping on the platform, and who would have fallen at once beneath the wheels had not Mr. Edwin Booth's arm sustained him. The gentleman remarked that he had had a narrow escape of his life, and was thankful to his preserver. It was Robert Lincoln, the son of that great, good man who now lies dead before our blistered eyes, and whose name we cannot mention without choking. 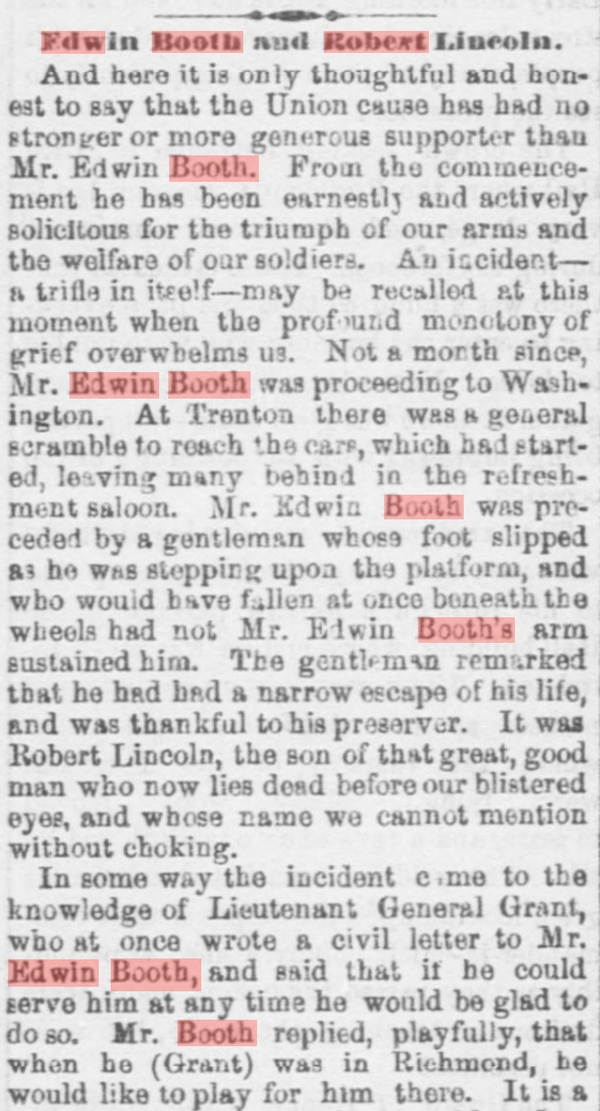 Many other accounts place the incident as occurring at Jersey City, and not Trenton. In April 1937, The New York Times published an account of the incident as told by "persons close to the Lincoln family who asked that their identity not be disclosed." 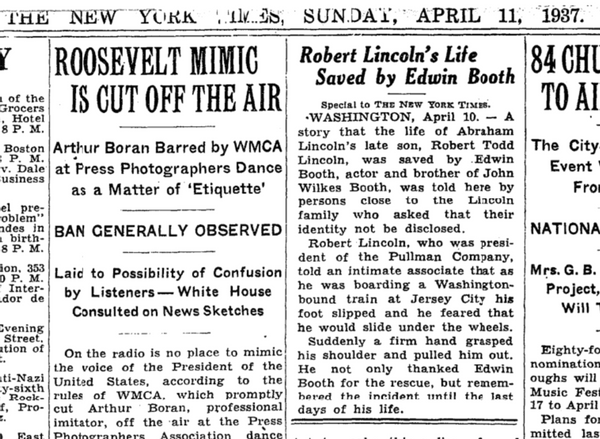 The date of Edwin Booth's rescue vary in numerous reports; the Cleveland Morning Leader writes about it as occurring right after Lincoln's death, with the words "not a month since." The Library of Congress places it in April 1865, the same month Lincoln was assassinated by John Wilkes Booth. However, the historian Jason Emerson writes in "Giant in the Shadows: The Life of Robert T. Lincoln" that the rescue occurred in either 1863 or 1864. That date range is echoed in this U.S. National Archives blog post written by the Archives' Office of Strategy and Communications staff writer Rob Crotty:

Robert Lincoln was the Lincoln's first son, and the only one to survive past his teenage years. Despite surviving his adolescence, Robert was nearly killed on a train platform in 1863 or 1864. He was moving between train cars at the Jersey City train depot when he slipped and was nearly crushed between the heavy cars. Just as he fell, a man reached out and grabbed him by the coat. Robert recognized the man immediately. "That was a narrow escape, Mr. Booth," he said, according to an account in Century Magazine. The man was the actor Edwin Booth, brother to John Wilkes Booth. He was traveling with John T. Ford, the owner of Ford's Theatre.

According to Emerson's book, Robert Lincoln was on vacation from Harvard University when it happened:

It was during one of Robert's travels to Washington that one of the arguably more bizarre coincidences in American history occurred [...] The story itself has been told numerous times over the past century beginning with a New York Times article in 1865, although the story and its mythos continually evolved as the decades passed.

In 1863 or 1864, Robert, on vacation from Harvard, was traveling from New York to Washington and waiting at a train station in Jersey City, New Jersey. While standing in line for tickets on a station platform, Robert was pressed by the crowd against the waiting train–which then began to move forward–and he fell into the narrow space between the train and the platform. He was helpless to escape when a hand grabbed his coat collar and pulled him up onto the platform. Robert turned to find his rescuer to be Edwin Booth, America's most revered stage actor, who was traveling to Richmond, Virginia with his friend John T. Ford (owner of Ford's Theater in Washington D.C.) to fulfill an engagement. Robert recognized the actor and thanked him by name. "I was probably saved by [Mr. Booth] from a very bad injury if not something more," Robert later wrote.

Emerson pointed out that there was no record of Robert Lincoln ever telling his parents about the incident, probably because he thought they had enough worries on their mind, and after the death of his younger brother Willie Lincoln in 1862, he was concerned about his mother's reaction.

According to the book "Robert Todd Lincoln: A Man In His Own Right" by John S. Goff, Robert Lincoln detailed the full incident in a 1909 letter to Richard Watson Gilder, a poet and editor of The Century Magazine. The book also states that Robert Lincoln himself dated the rescue as happening in 1863 or 1864. He wrote:

The incident occurred while a group of passengers were late at night purchasing their sleeping car places from the conductor who stood on the station platform at the entrance of the car. The platform was about the height of the car floor, and there was of course a narrow space between the platform and the car body. There was some crowding, and I happened to be pressed by it against the car body while waiting my turn. In this situation the train began to move, and by the motion I was twisted off my feet, and had dropped somewhat, with feet downward, into the open space, and was personally helpless, when my coat collar was vigorously seized and I was quickly pulled up and out to a secure footing on the platform. Upon turning to thank my rescuer I saw it was Edwin Booth, whose face was of course well known to me, and I expressed my gratitude to him, and in doing so, called him by name.

Robert Lincoln did write later that although he never met Edwin again in person, he had a "most grateful recollection of his prompt action on my behalf."

Edwin Booth was driven into temporary retirement after his brother assassinated the president, but returned to the stage in 1866, and opened his own theater in New York.

While the timing and location appeared to vary, the story itself has been widely documented and verified by Robert Lincoln himself. We thus rate this claim as "True."