Did John Kerry Hide His Connection to an Iranian Official with Whom He Negotiated a Nuclear Deal?

Only by extremely tortured logic can one claim that a native-born New Yorker who has never been to Iran is nonetheless 'Iranian.' 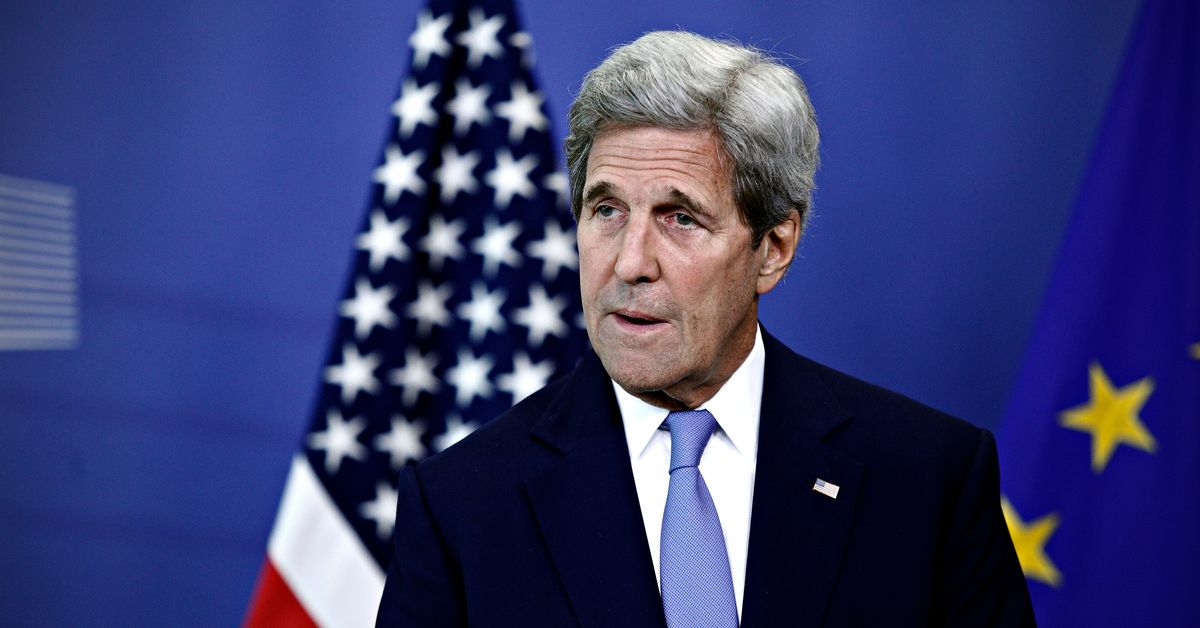 Claim:
U.S. Secretary of State John Kerry hide a close familial connection to an Iranian official with whom he negotiated a nuclear deal.
Rating:

On 28 July 2015, the web site of Allen B. West, a former one-term congressman and conservative pundit, published an article asserting that U.S. Secretary of State John Kerry had hidden a close familial connection to an Iranian official with whom he had negotiated a nuclear deal.

According to that article ("You will NOT BELIEVE who was best man at John Kerry's daughter’s wedding"), John Kerry concealed the information that his son-in-law was Iranian during the U.S. Senate confirmation hearing for his position as secretary of state. Moreover, throughout the negotiations over a deal limiting Iran's development of nuclear weapons, Kerry hid the fact that he was buddy-buddy with Mohammad Javad Zarif, the Iranian foreign minister whom he negotiated the nuclear deal — so much so that the best man at the wedding of Kerry's daughter was Zarif's son:

You not might be aware that in 2009, the daughter of Secretary of State John Kerry, Dr. Vanessa Bradford Kerry, John Kerry’s younger daughter by his first wife, married an Iranian-American physician named Dr. Brian (Behrooz) Vala Nahed.

Of course you're not aware of it.

Brian (Behrooz) Nahed is son of Nooshin and Reza Vala Nahid of Los Angeles. Brian's Persian birth name is "Behrooz Vala Nahid" but it is now shortened and Americanized in the media to "Brian Nahed." At the time his engagement to Bradford Kerry, there was rarely any mention of Nahed's Persian/Iranian ancestry, and even the official wedding announcement in the October 2009 issue of New York Times carefully avoids any reference to Dr. Nahed (Nahid)'s birthplace (which is uncommon in wedding announcements) and starts his biography from his college years.

Gosh, I wonder why??

Gee, do you think Secretary Kerry should have recused himself from the negotiations with Iran at the very outset because of his long-standing relationship to his Iranian counter-part, Mohammad Javad Zarif? Let me explain.

Zarif is the current minister of foreign affairs in the Rouhani administration and has held various significant diplomatic and cabinet posts since the 1990s. He was Kerry’s chief counterpart in the nuclear deal negotiations.

Secretary Kerry and Zarif first met over a decade ago at a dinner party hosted by George Soros at his Manhattan penthouse. What a surprise. I have to say, connecting the dots gets more and more frightening.

But it gets even worse. Guess who was the best man at the 2009 wedding between Kerry’s daughter Vanessa and Behrouz Vala Nahed? Javad Zarif’s son.

Does this bother anyone at all?

Apparently Kerry only revealed his daughter’s marriage to an Iranian-American once he had taken over as Secretary of State. But the subject never came up in his Senate confirmation hearing, either because Kerry never disclosed it, or because his former colleagues were “too polite” to bring it up.

As Front Page Magazine pointed out several months ago, the nuclear talks with Iran were a tragic farce, choreographed and orchestrated by Iran.

And unfortunately, we’re going to have to live with the consequences. At least, I hope we live.

All of this information was wrong.

Vanessa Bradford Kerry, John Kerry's daughter from his previous marriage to writer Julia Stimson Thorne (from whom he was divorced in 1988), married Brian Vala Nahed on 10 October 2009. Brian Nahed is not Iranian: he is an American-born U.S. citizen who attended school at UCLA and Yale and is currently a neurosurgeon at Massachusetts General Hospital (where his wife is also a physician specializing in critical care). This information has been plainly available for years in his official workplace biography on the Massachusetts General Hospital web site:

Born in New York, Dr. Nahed attended UCLA where he majored in Neuroscience, graduating Phi Beta Kappa and with the department's Highest Honors. He attended the Yale School of Medicine where he was awarded the Doris Duke Clinical Research Fellowship and graduated with honors. Dr. Nahed completed his internship and neurosurgery residency at the Massachusetts General Hospital; where Dr. Nahed also completed a postdoctoral fellowship with Drs. Daniel Haber and Shyamala Maheswaran in the MGH Cancer Center.

Brian Nahed is not Iranian: he was not born in Iran, he has never held Iranian citizenship, he has never worked or lived in Iran, and he has never even been to Iran. He's a natural-born U.S. citizen from New York who has lived, attended school, and worked in the United States his whole life. More important, he is not close friends with either Iranian foreign minister Javad Zarif or Zarif's son: he doesn't know either of them, and Zarif's son was not the best man at his wedding (nor, as some accounts report, was Zarif's son his college roommate). Vanessa Kerry herself verified to us that Zarif's son was not at her wedding:

The small piece of information here that is true is that Brian Nahed's parents were themselves born in Iran. However, they permanently left that country to immigrate to the U.S. forty years ago, well before the Iranian Revolution of 1979, and now live in Los Angeles (where Brian's father also works as a physician).

As for the rest of the "facts" presented in the Westian article, they were nothing more than a collection of supposition and innuendo, such as the claim that John Kerry "only revealed his daughter's marriage to an Iranian-American once he had taken over as Secretary of State" in 2013. By the article's own admission, that marriage had been very publicly covered in wedding announcement published by the New York Times in 2009, one which used the full "Persianized" versions of Brian's parents' names — something hardly suggestive of the notion that the media were conspiring to cover up revelation of their ancestry:

The bride, who is a stepdaughter of Teresa Heinz Kerry and Richard J. Charlesworth, and the bridegroom, a son of Nooshin P. Nahed and Dr. Reza M. Nahed of Los Angeles, were married Saturday evening at Brandegee House, a Tuscan-style villa in Boston. The Right Rev. M. Thomas Shaw, the bishop of the Episcopal Diocese of Massachusetts, officiated.

Finally, the unsourced statement that "Secretary Kerry and Zarif first met over a decade ago at a dinner party hosted by George Soros at his Manhattan penthouse. What a surprise." is (even if true) little more than out-of-context innuendo intended to suggest some kind of close pre-negotiation friendship between the two figures without providing any actual evidence of it.

Both men have an extensive history of political and diplomatic service to their countries over the last thirty years: Mohammad Javad Zarif lived in and was educated (up to the PhD level) in the United States, served as a member of the Iranian delegation to the United Nations (a position in which he met with a number of Washington politicians), has been a headline speaker at foreign policy conferences in the U.S. (attended by prominent Washington politicians), and has been Iran's minister of foreign affairs since 2013, while John Kerry served several terms in the U.S. Senate, was the Democratic presidential nominee in 2004, chaired the Senate's Foreign Relations Committee, and has been U.S. Secretary of State since 2013. It's hardly a "surprise" to anyone the least bit familiar with the political world that two men who have long held high positions in their countries' national governments and been closely involved with foreign affairs might have crossed paths at some point prior to their first negotiation as their countries' official representatives.