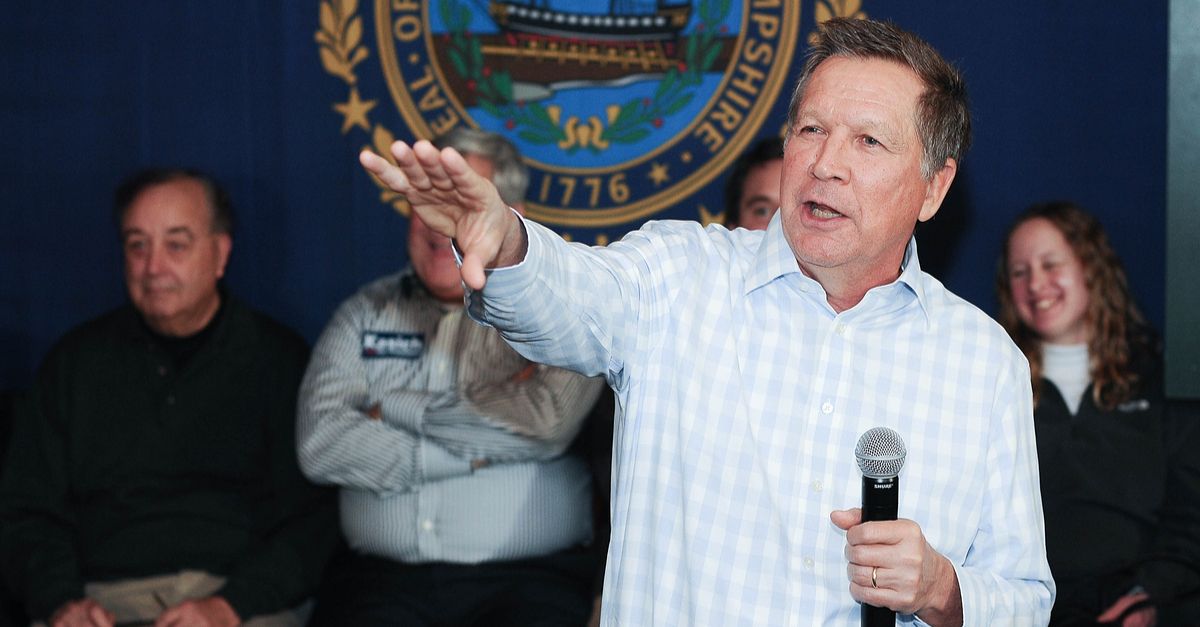 Claim:
John Kasich said if women can't be trusted to "keep their legs closed," then they are unfit to choose abortion.
Rating:

On 15 December 2016, Politicops published an article appearing to report that Ohio governor John Kasich said that if a woman couldn't be trusted "to keep her legs closed" than she was unfit to decide whether or not to have an abortion:

Recently, Republican Ohio Gov. John Kasich vetoed the so-called “heartbeat bill,” a measure that would have banned all abortions after about six weeks of pregnancy, or before many women even know that they are pregnant. At the same time, Kasich signed a bill banning abortion after 20 weeks of pregnancy, with exceptions only for saving a pregnant woman’s life or preventing the “substantial and irreversible impairment of a major bodily function.”

“At the risk of sounding discriminatory, which is not at all my goal here, but at the risk of sounding like that, there is no way women should be allowed control over whether or not they are going to have abortions,” Kasich told the Ohio Daily Star. “Women are wonderful beings, they are kind, loving, incredible and a whole other plethora of adjectives could be used to describe them, but at the end of the day, I’m sorry to have to say this, but the honest truth is that women used to be all those things. The women of today are mainly opportunists and gold diggers, who typically get pregnant due to unsafe sex, or to get their partners to marry them ... That’s that, if a woman these days is not intelligent enough to keep her legs closed when they’re supposed to be closed, if she doesn’t have the foresight to make sure she doesn’t get herself in a situation where she might be pregnant, then there is no way a woman like that can or should be entrusted with the decision of having an abortion.

Women in this country really need to learn to either keep their legs closed or their other orifices open,” the governor concluded.

As with all items published by Politicops, (and its related sites Religionlo, Politicalo, and Newslo), the article began with a reference to a debate over proposed abortion restrictions in the state of Ohio.  But articles from Newslo and its sister sites typically start off with a paragraph of fact-based information before launching into fabricated details, and all subsequent "quotes" from John Kasich were pure fabrications.

Newslo's roster of fake news sites often circulate via the lesser-known Politicops domain on social media, and all include a function allowing readers to "show facts" or "hide facts." But all Newslo-linked articles display by default in "hide facts" mode, ensuring most readers view articles unaware of the significant appended embellishments:

Earlier Newslo fabrications included claims that Chris Christie thought that a female Viagra would spread "lesbianism" (and separately, that he voted down a gender pay parity bill for religious reasons), an Alabama politician tried to mandate saliva-based "hunger tests" for food stamp recipients, Ted Cruz said he'd run as a Democrat if something affected Hillary Clinton's campaign, Mike Pence said if abortion was legal in cases of rape women would try to "get raped" in order to obtain an abortion, the father of Brock Turner lamented the absence of punishment for the victim in his son's sexual assault case, and that televangelist Pat Robertson claimed that David Bowie did not die, but was kidnapped by demons.