Rumor: John Fawcett, a suspect in a number of sex crimes against a child victim, remains at large.

Claim:   John Fawcett, a suspect in a number of sex crimes against a child victim, remains at large.

This is a evil evil man!! He has been on the run for about a month now (as of April 1st 2015). He is charged with 1st degree rape, 1st degree sodomy, and incest. His victim is my 8 year old niece. Please get the word out and help find this man, so he can pay for what he did, and before he hurts another child. He could be anywhere by now, but he has family in Barnegat New Jersey so he may be in that area. He looks to have a tattoo on his left chest with the words Kimberly on it also. He cant hide forever, somebody has to know something or has seen him. Please share everywhere! 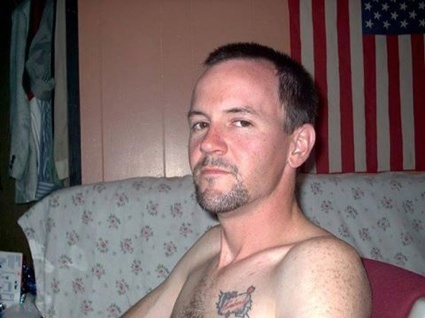 Origins:   On 2015, a Facebook user published the warning and photograph shown above, urging fellow social media users to share the posted information in the hopes of tracking down a child predator on the run. Tens of thousands of Facebook users complied with the request; but the warning's text did not include some of the most relevant pieces of information, such as the name of the man to whom the poster referred (John Fawcett) and the area in which his alleged crimes occurred (Lexington, Kentucky). And as is often the case with such online warnings, readers continued to spread the message even after it was rendered moot because the issue it referenced had been resolved.

Lexington, Kentucky, television station WLEX published an article on 2015 corroborating some aspects of the warning:

John and Jacqueline Fawcett are said to be running from police which, perhaps, explains why they wouldn't answer the door for our reporter.

The local police have been making regular visits to the Fawcett place for a month. Now though, with allegations of sexual abuse surfacing, it appears as though they've taken off.

WLEX will continue to follow this story, but as of now, it appears that as allegations mounted, the Fawcetts left town in a hurry.

On 2015, the Wayne County Outlook reported that Jacqueline Fawcett, wife of John Fawcett, had been arrested and charged with sex crimes involving a child under age twelve:

Authorities have confirmed that Jacqueline Fawcett, 29, was arrested on Wednesday, March 18 and charged with incest (victim under 12 years of age) and sodomy first degree. She was lodged in the Wayne County Detention Center and no bond was set.

On 2015, that same publication reported that John Fawcett had been arrested in Florida on 2015 on an unrelated drug charge:

A Wayne County man has been arrested in Panama City, Florida and charged in connection with sexual abuse allegations involving a child.

John Fawcett was arrested on Friday, April 10 on an unrelated drug charge in Panama City.

As both Fawcetts have now been taken into custody, and the victim's family's concerns have been assuaged, this warning is no longer current:

Now, the victim's family speaks out about the man's out-of-state arrest.

Officials say John Fawcett is accused of raping a child and then disappearing, until he was found and arrested in Florida.

"It is a big relief. We did tell the victim that he has been caught and she was happy," a family member of the victim told WLEX by phone.

The family of the victim asked WLEX not to reveal their identity to protect the child's privacy, but they say after learning of the recent arrest, the healing process has begun.

"Now she can rest. She was scared to death he was going to come back and get her so that's a big relief on her," said the family member.

Jaqueline Fawcett has already been indicted for allegedly helping John Fawcett abuse the child. That's when the victim's family took to social media to help find the other suspect.

"Praise the lord that he has been caught so he doesn't hurt another child," said the family member.