Did Joe Biden Tell a False Story About a War Hero?

Some key details of an incident that happened in 2011 were wrong, but the central aspects of the story Biden told weren't false. 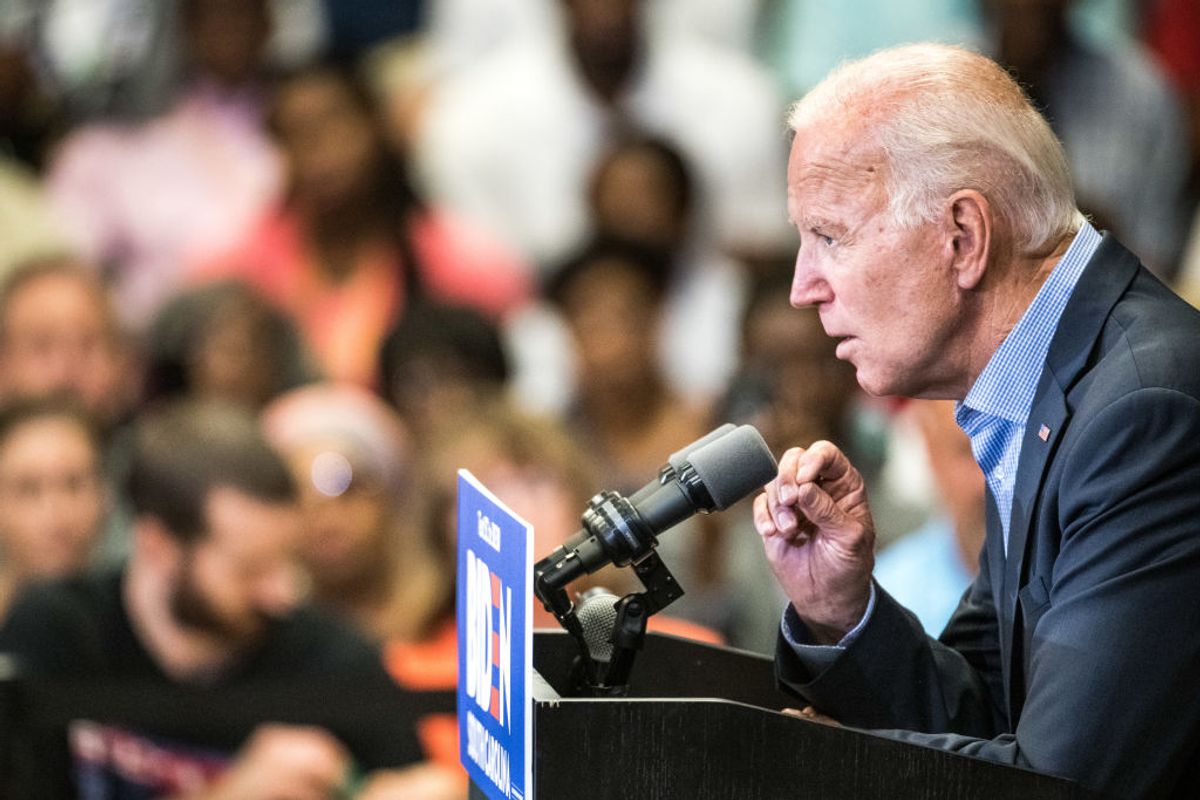 Claim:
U.S. Democratic presidential candidate Joe Biden told a "false" or "fabricated" story about a war hero while on the campaign trail.
Rating:

In recounting a story about a grief-stricken soldier who tried to refuse a medal pinned on him by Biden, Biden got key details wrong.

Biden's story is not "false," as was widely reported, because his underlying recollection of pinning a medal on a grieving soldier who did not want the medal is based on a real occurrence.

U.S. Democratic presidential candidate Joe Biden's retelling of a harrowing war story turned into a media circus after the Washington Post reported that it "never happened" because details were misstated.

During a campaign event in Hanover on Aug. 23, 2019, Biden recounted a story about his interaction with a heroic but grieving soldier. Biden had traveled to Konar province in Afghanistan to pin a Silver Star on a Navy captain who had tried to save his dying friend by braving enemy fire, Biden said, rappelling into a ravine and carrying the friend out on his back. But the soldier didn't want the medal, because his friend didn't survive.

The headline on the Post's story about Biden's statements reads, "As he campaigns for president, Joe Biden tells a moving but false war story," and the Post reported, "Based on interviews with more than a dozen U.S. troops, their commanders and Biden campaign officials, it appears as though the former vice president has jumbled elements of at least three actual events into one story of bravery, compassion and regret that never happened."

One question raised by the Post was "whether President Trump’s routine falsehoods have changed the standards by which other presidential aspirants, including Biden, should be judged," noting that Trump has "uttered more than 12,000 false or misleading statements, The Washington Post has found. He has continued to add to that total since then."

The idea that the former vice president and 2020 Democratic front runner lied about a war hero was a sensational one, and it spread quickly. Shortly after the Post story was published, other news organizations from across the political spectrum followed suit. The incident "never happened" or it was "fabricated," echoed conservative outlets Fox News and Breitbart. "Joe Biden tells false war story on campaign trail," reported a headline from the liberal MSNBC.

The Post reported Biden may have conflated the heroic actions of Kyle J. White, Miles Foltz and Chad Workman, all soldiers who were recognized for putting their lives at risk at different times and places in Afghanistan to help others.

But there's a difference between telling a story with the wrong details and telling a story that is fabricated. To claim that Biden's story is false might give readers the misleading impression that the soldier at the center of it doesn't exist.

He does exist, and he did, in his grief, tell Biden he didn't want the medal Biden pinned on him in 2011. In fact, the Post story contains an official White House image of Biden pinning a medal on Army Staff Sgt. Workman and quotes Workman confirming the central aspect of Biden's story, notwithstanding some of the finer details.

It wasn't a Silver Star that Biden pinned on Workman, it was a Bronze Star. The site of the medal ceremony wasn't Konar province, it was Wardak. And Workman had tried to pull his friend from a burning vehicle, not a ravine. "I never pulled him out because he was melting," Workman told the Post.

Workman’s company commander told him that the vice president was going to pin a Bronze Star on him for his heroism. “I tried to get out of going,” recalled Workman, who has since been promoted to first sergeant. “I didn’t want that medal.” Nevertheless on Jan. 11, 2011, a cold, gray day, Workman stood at attention as Biden pinned the medal to his chest. The moment is memorialized in a White House photo and in a 2016 interview that Biden did with National Geographic.

Workman’s version is the same, but with one added detail. He recalled Biden meeting his gaze. Workman told the vice president that he didn’t want the medal.

“He has that look where his eyes can see into your eyes,” Workman said. “I felt like he really understood.”

Although the Post reported that Biden may have conflated separate events in his telling of the story on different occasions, Biden's campaign has not addressed that claim. Biden's campaign spokesman, Andrew Bates, declined to comment when we reached him by telephone, instead pointing to a statement published by the Post in which Bates said that Workman's story is "emblematic of the duty and sacrifice of the 9/11 generation of veterans.”

Biden addressed the topic in an Aug. 30, 2019, podcast interview with the Post's Jonathan Capehart, pushing back on the Post's reporting that his statements were false, or represented one of a series of gaffes made by Biden:

Now, the only thing I know, I've been told, I have not read the story for real, I haven't seen it, I guess it came out this morning. But the assertion I made was there was a young man who I attempted to pin a medal on at the request of the commander. And he said, 'I don't want it, he died, he died.' Well, turns out, that's true. The young man did say that. They went back, I'm told, I didn't see the story, and confirmed that yeah, that's exactly true. That's what I was talking about.

There was a separate incident that occurred in a different time and a different circumstance. But what I was talking about was a young man — I mean what is the gaffe when I said there was a young man and I tried to pin a medal on him and he said, 'I don't want it sir. He died, he died, he died.' And it was a young man, my recollection was, that in fact pulled a colleague of his out of a burning Humvee, and he risked his life doing it, and the young man died, that he tried to save. His commanders asked me to pin the medal on him when I was in theater, and when I went to do it he said, 'I don't want it sir.' He took it, I pinned it on him. And he said, He died, sir, he died.'

I was making the point how courageous these people are. How incredible they are, this generation of warriors, these fallen angels we've lost. And so, I don't know what the problem is. I mean, what is it that I said wrong?

Viser, Matt and Greg Jaffe. "As He Campaigns for President, Joe Biden Tells a Moving but False War Story."   The Washington Post. 29 August 2019.

Capehart, Jonathan. "Biden Responds to 'Gaffes' Criticism: 'What Is It that I Said Wrong?'"   The Washington Post podcast. 30 August 2019.

Lovegrove, Jamie. "Biden Says in SC That ‘Essence’ of War Story is Accurate Despite Report of False Details."   The Post & Courier. 29 August 2019.