Did Joe Biden Publicly Reveal the Identity of the Special-Ops Unit That Killed Bin Laden?

In question are statements the former U.S. vice president made following the raid that killed the mastermind of the 9/11 attacks in the U.S. 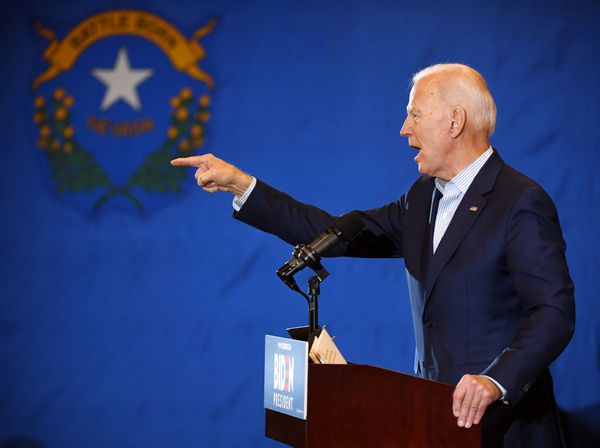 Claim:
Then-Vice President Joe Biden publicly revealed the identity of the special-operations unit responsible for Osama bin Laden’s killing during a 3 May 2011 speech at the Atlantic Council Awards Dinner.
Rating:

In the early hours of 2 May 2011, a team of 79 American special-operation forces belonging to the Navy’s elite SEAL Team 6 flew two helicopters at low altitude across the Afghanistan-Pakistan border, avoiding Pakistani radar as they landed in a compound inhabited by al-Qaeda leader Osama bin Laden. Minutes later, the  mastermind of the 9/11 attacks in the U.S. was dead, and the SEALs were airborne once again.

That evening, U.S. President Barack Obama confirmed in televised remarks that bin Laden was dead and that no Americans had been harmed in the operation. In its 2 May 2011 reporting of the raid, The New York Times stated that the Obama administration “disclosed” that SEALs and CIA operatives had taken part in the raid:

The administration disclosed that military and intelligence officials first learned last summer that a “high-value target” was being protected in the compound, and they began working on a plan for going in to get him. Beginning in March, Mr. Obama presided over five national security meetings at the White House to review plans for the operation. On Friday morning, just before leaving Washington to tour tornado damage in Alabama, Mr. Obama gave the final order for members of the Navy Seals and C.I.A. operatives to strike.

That same day, the Washington Post specifically identified the SEAL team that carried out the raid:

The elite team of Navy SEALs tapped for the job were a group who were stationed at Naval Air Station Oceana in Virginia Beach. The team is part of a counterterrorism group so specialized that no one can apply to join it. The operatives are recruited from existing SEAL teams. They are an elite group within the elite.

The next day, U.S. Vice President Joe Biden spoke at the 2011 Atlantic Council Awards Dinner, which was that year honoring among others Admiral James G. Stavridis, then-Supreme Allied Commander for NATO. In Biden’s speech, he acknowledged the bin Laden raid in two instances, mentioning — as did The New York Times the day before — that Navy SEALs and the CIA were involved:

Let me briefly acknowledge tonight’s distinguished honorees: Admiral Jim Stavridis is a – is the real deal; he could tell you more about and understands the incredible, the phenomenal, the just almost unbelievable capacity of his Navy SEALS and what they did last – last Sunday. [...]

I’d be remiss also if I didn’t say an extra word about the incredible events, extraordinary events this past Sunday. As vice president of the United States, as an American, I was in absolute awe – awe – of the capacity and dedication of the entire team, both the intelligence community, the CIA, the SEALs; it just was extraordinary.

These statements have been used to suggest that Biden put Seal Team 6 in danger, and that he may have even been responsible for the death of several SEAL Team 6 members in a raid that occurred three months later — a claim popularized by Boston-area radio personality Jeffrey T. Kuhner. Writing an “opinion/analysis” piece for the Washington Times in June 2013, he described Biden’s speech this way:

On May 3, at an event in Washington, Vice President Joseph R. Biden Jr. did the unthinkable: He publicly revealed the identity of the special-operations unit responsible for bin Laden’s killing. His reckless action put at risk the lives of every member of SEAL Team 6. The Taliban and other jihadists eager to avenge bin Laden now knew which unit to target. Stunned and shocked, SEAL members immediately realized they were going to be hunted by al Qaeda sympathizers. [...] SEAL Team 6 is a covert unit, which is supposed to operate in the shadows. This is how they are able to conduct deadly raids on terrorist groups. Their reward, however, for killing the world’s foremost terrorist mastermind was to be outed by their own government.

Readers who had actually seen Biden’s speech would likely be confused by this interpretation. In his speech, Biden at no point mentioned SEAL Team 6, the names of any SEALs involved in the raid, or any other information that had not been publicaly reported the day before. We asked Stavridis if he felt Biden's words put the lives of people who conducted the raid at risk. By email, he told us that he and another military figure in attendance did not then, and do not now, believe Biden put lives at risk:

The Navy Special Warfare community is generally (and appropriately) tight lipped about their operations. That said — I did not believe that night in May 2011 — or today — that Vice President Biden's comments were in any way inappropriate or that they put at risk the lives of those who conducted that historic operation. I think he kept it at a level of generalization that made it completely acceptable in my view.

My close friend and colleague retired Navy captain Bill Harlow was also at the event and served many years as a public affairs specialist for the Navy and at both NSC staff and the CIA. I matched recollections with his and he agrees with the view above as well.

Despite these realities, the claim that Biden released actionable, identifying information about the unit that carried out the bin Laden raid has metastasized into something even more inflammatory. Kuhner, in his Washington Times piece, suggested that Biden intentionally placed SEAL Team 6 in danger, and that this action was responsible for the death of Americans involved in a later 6 August 2011 mission that took the lives of 15 SEAL Team 6 operators and 15 other American service members:

On Aug. 6, 2011, a Chinook helicopter carrying 30 U.S. service members — including 15 SEAL Team 6 members — was shot down in Afghanistan. Everyone on board was killed. The rescue team was sent to aid an Army Ranger unit battling the Taliban and desperately in need of backup. The Chinook was shot down by a Taliban rocket-propelled grenade in Wardak province. Taliban fighters were waiting on three sides for the aircraft as it approached. The Chinook was a sitting duck as it hovered in the sky. The evidence is overwhelming and disturbing: SEAL Team 6 members were ambushed. It was America’s single greatest loss of life in Afghanistan and the largest number of SEALs ever killed in one incident in history. [...]

Mr. Biden is no bumbling fool. Rather, his deliberate, reckless disclosure placed SEAL Team 6 in mortal jeopardy. He and his boss, President Obama, exploited them in order to boost their re-election chances. The SEALs, however, paid the ultimate price. Mr. Obama and Mr. Biden have American blood on their hands.

Kuhner made no effort in that story or in any subsequent reporting that repeats his claims to explain how Biden’s “disclosure” that Navy SEALs were involved in the 1 May 2011 bin Laden raid would have tipped off the Taliban to the fact that the SEALs — specifically SEAL Team 6 — would be conducting an operation in Afghanistan on 6 August 2011. Instead, Kuhner relies on innuendo and a misrepresentation of Biden’s remarks to make that point. This poorly reasoned innuendo, though it may be lacking in basis, apparently is re-emerging as a smear against Biden now that he has declared his candidacy for president in the 2020 election.

In point of fact, the claim that Biden “publicly revealed the identity of the special-operations unit responsible for bin Laden’s killing” is demonstrably false. He did not identify the unit involved in the attack. He did, however, acknowledge the involvement of Navy SEALs more generally. This fact had been widely reported before Biden made his remarks.