The Rolling to Remember motorcycle rally in May raises awareness of veterans' issues. 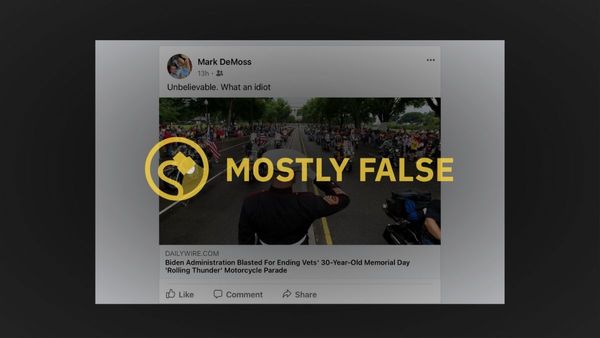 Claim:
U.S. President Joe Biden has ended a 30-year tradition on Memorial Day weekend, called Rolling to Remember, which is a motorcycle parade for veterans.
Rating:

A veterans’ motorcycle rally will not take place at the Pentagon on May 30, 2021, because the Pentagon denied a parking permit request from organizers of the Rolling to Remember rally due to the COVID-19 pandemic. Staging the rally there has been part of a 32-year tradition.

The Pentagon only denied organizers a permit to stage their rallying point on their premises. The rally has not been canceled by Biden. It will be relocated elsewhere in Washington, D.C. This tradition may resume next year, pending pandemic restrictions.

For more than 30 years, thousands of military veterans have staged a motorcycle rally in the Pentagon’s parking lot for Memorial Day, followed by a drive past national monuments and through the National Mall over the weekend. The events are meant to bring awareness to veterans' issues, including suicide and missing-in-action service members.

But the Department of Defense rejected a parking permit request at the Pentagon from American Veterans (AMVETS) — organizers of the annual veterans’ motorcycle rally — because of the COVID-19 pandemic.

Firstly, U.S. President Joe Biden himself did not cancel the entire rally, but his administration’s Department of Defense did prohibit a gathering on Pentagon premises. The Pentagon released a statement on April 30 sharing why it did not permit the rally to take place there:

Unfortunately, the department has disapproved AMVETS permit request. The department took into careful consideration all aspects of AMVETS request, to include the current Health Protection Condition status on the Pentagon Reservation; substantial community transmission of COVID-19 in Arlington County, Virginia; number of Americans fully vaccinated across the nation; nature of this event with its decreased ability to maintain physical distance; and large crowds in one location for an extended period of time. This event draws national attention and participation; therefore the risk of exposure from participants from other communities extends well beyond the National Capital Region.

The tradition of gathering there, while cancelled for this year, may still continue next year if pandemic restrictions loosen. So it is certainly not the end of a tradition, simply a pause. The Pentagon’s statement continued:

If COVID-19 conditions permit, the department would gladly consider supporting a future event request from AMVETS, potentially as soon as this Labor Day weekend. [...] The department looks forward to supporting future events with AMVETS, and as always, we appreciate AMVETS' support of our veterans, their families, and their communities, including promoting better awareness of veterans' issues, as well as AMVETS continued support for our missing-in-action service members.

While the Pentagon did not give AMVETS a parking permit to stage the rally, the rally will still go ahead elsewhere. The official Rolling to Remember Twitter account released a statement debunking claims that the whole event was being cancelled, and said it was going ahead with the rally elsewhere:

AMVETS, however, was not too happy with the Pentagon’s decision. In a longer statement shared on May 3, the group said:

“The biggest disappointment in the Pentagon’s denial was that AMVETS was ignored for months as its professional staff in Washington requested numerous times an opportunity to hear the Defense Department’s concerns and present a COVID-19 safety plan to the Pentagon’s decision makers before rendering a decision,” said AMVETS National Commander Jan Brown. “In the end, the Pentagon decided to deny the application without any meaningful communication with AMVETS.”

AMVETS remains confident that they will host a safe, reasonable demonstration outdoors that incorporates social distancing, masking where appropriate, and sanitation stations. AMVETS took other prevention steps, including canceling the rally in front of the Lincoln Memorial because AMVETS didn’t believe social distancing would be possible there.
[...]
As regional government and law enforcement officials understand, several thousand motorcycle-riding demonstrators are still planning to come to Washington over Memorial Day weekend to remember the fallen and demonstrate. It is imperative they have a safe place to rally that Sunday morning. The Pentagon’s expansive parking space was ideal to ensure social distancing. AMVETS remains committed to coordinating a safe, coordinated staging area for those demonstrators.

They added that they had partnered with the Biden administration in their campaign to promote vaccine awareness:

AMVETS is a charter member of the Biden Administration’s newly formed COVID-19 Community Corps, a campaign to increase vaccine confidence while reinforcing basic prevention measures.
[...]
“The administration included AMVETS in this new group as ‘a trusted voice in communities across the United States,’ but the Pentagon wouldn’t have a conversation with us to share their concerns and give us the chance to address them before deciding to refuse our application,” [National Executive Director Joe Chenelly] said. “If we had those conversations and still came to the conclusion that safety was not possible, we would have pulled our application ourselves. We told the Pentagon that.”

As of this writing, AMVETS says it wants to move its staging area to RFK Stadium.

Given that the overall rally is just being moved to another location, and only the tradition of gathering at the Pentagon has been cancelled for this year, and may continue at another time, we rate this claim as “Mostly False.”