Did Joe Biden Grope Stephanie Carter During a Government Ceremony?

The former vice president didn't have that much of a thing for the wife of former defense secretary Ash Carter. 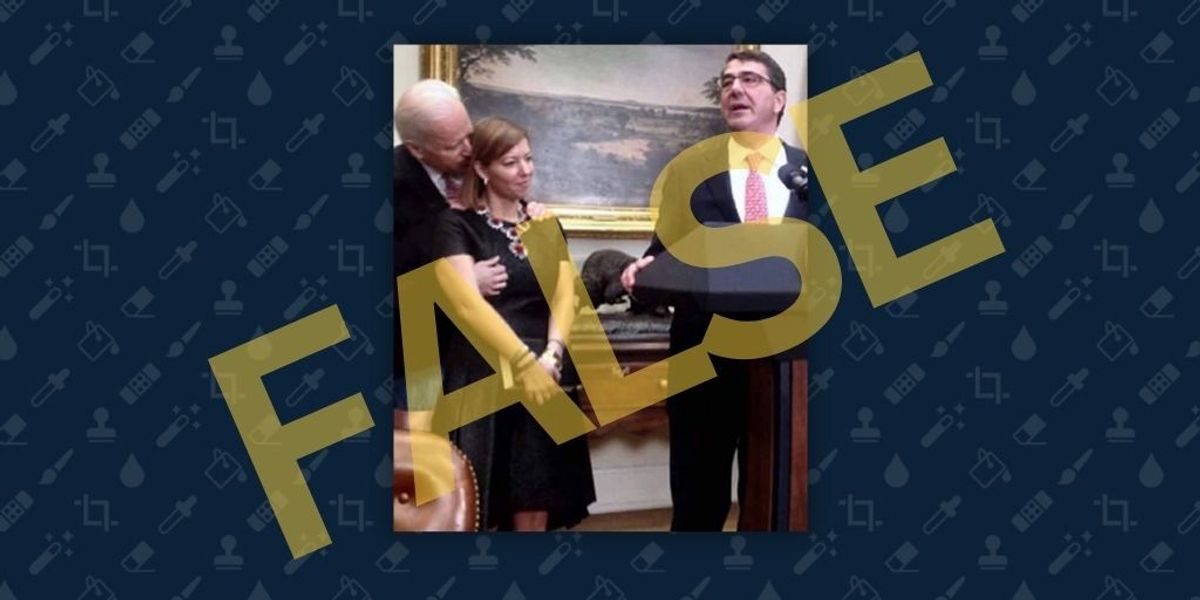 An image purportedly showing Vice President Joe Biden groping a woman's breast during an official government ceremony was recirculated on social media in October 2017, after hundreds of women (and several men) stepped forward to accuse filmmakers, reporters, politicians, presidents, and men from various other industries of sexual harassment and misconduct:

This image has been manipulated. It uses a photograph that former White House reporter Nedra Pickler took in February 2015 during the swearing-in of Defense Secretary Ash Carter, but the original image showed Biden with his hands on Stephanie Carter's shoulders:

The manipulated image originally appeared on World News Bureau, a "satire" web site that carries a disclaimer stating "This is fictitious satire and any resemblance to persons, places, or events is coincidental."

The original photograph, though considerably tamer, stirred a good deal of controversy in 2015 nonetheless. Several news outlets criticized Biden for getting a little too close to Carter during the ceremony, with NBC News even asking if Biden had engaged in "Veep Creep":

Vice President Joe Biden was swearing in new Defense Secretary Ash Carter when he got up close and personal with the wife of the man who now runs the most powerful military in the world.

As Carter began speaking in the Roosevelt Room, Biden beckoned Stephanie Carter from across the room, then put both hands on her shoulders as her husband thanked Biden for presiding over the ceremony. Biden's hands lingered for roughly 20 seconds until he leaned in and whispered in her ear.

Biden places his hand on Carter's shoulders around the 12:30 mark in the following video:

Ash Carter later said that he laughed about the incident and said that he and Stephanie were great friends with the Bidens:

“Oh, I laughed. I laughed. I laughed. They know each other extremely well, and we’re great friends with the Bidens,” he said in an interview with NBC’s Savannah Guthrie on the “Today” show. Carter was traveling to his high school alma mater for a speech on the future of the armed forces.

Carter’s wife later said she was not offended by the vice president putting his hands on her shoulders and whispering in her ear, but Biden’s actions drew close scrutiny on social media and late-night talk shows. Again, this doctored photograph was created by the satire web site WorldNewsBureau.com, where it was originally published in December 2013. In addition to digitally altering the position of Biden's hands, World News Bureau also added a bottle of liquor in Biden's pocket.

The original picture, which shows Jill Biden, NBC producer Chris Donovan, and Vice President Joe Biden with his arms around White House reporter Amie Parnes at a Christmas party at the White House, was also circulated in articles criticizing Biden for improper behavior.

Here's a comparison of the real photograph (left), which was reportedly taken from Parnes' Facebook page, and the doctored image (right):