Did Jimmy Carter Pen the 'Losing My Religion for Equality' Op-Ed? 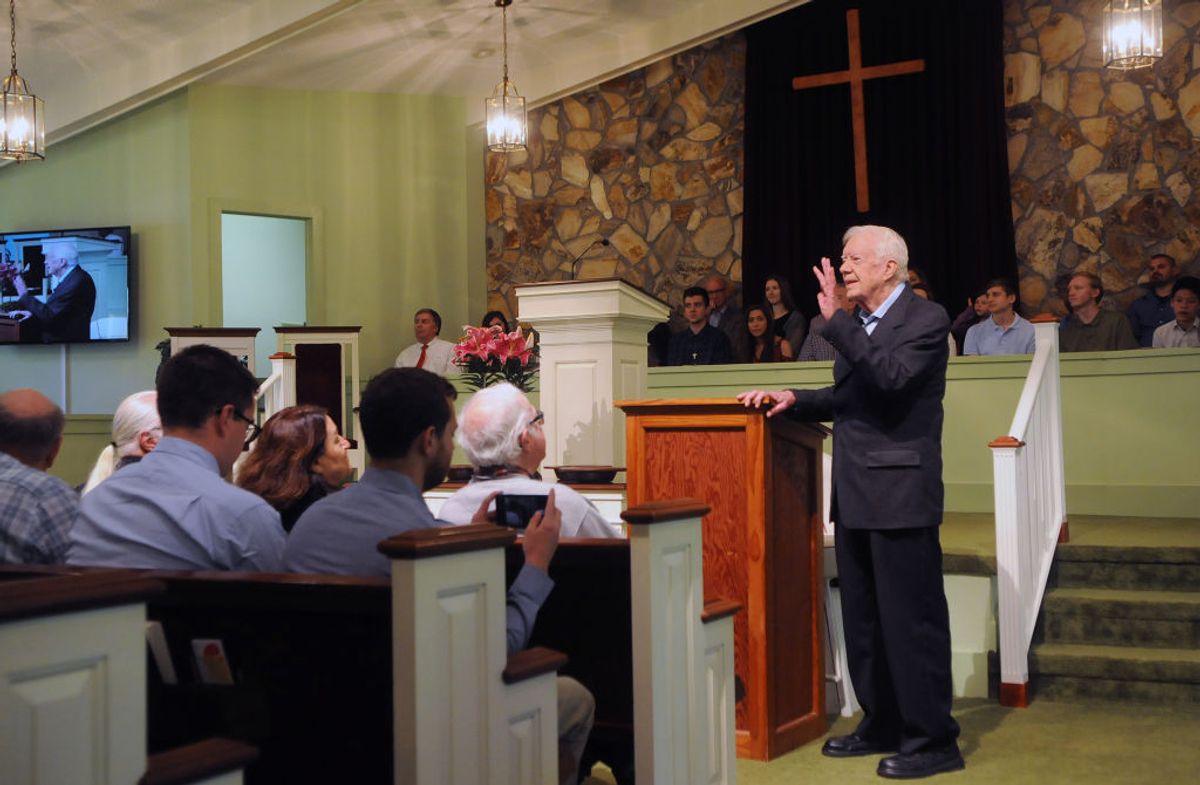 An op-ed entitled "Losing my Religion for Equality" by former President Jimmy Carter occasionally makes its way around the internet, drawing a mix of reactions and questions from readers. Did Carter really write this? Did he really leave the church? Doesn't he teach Sunday school?

Carter, a third-generation Baptist who has taught Sunday school since the age of 18, turned to his faith often during his political career. In 1995, he reflected on how his faith guided him through his presidency, saying that "there's no doubt that during my time as president I prayed more intensely and more fervently for God's guidance than at any other time in my life."

In 2000, however, Carter found himself at odds with the Southern Baptist Convention as the group announced its opposition to women pastors. A few years prior, the group also added a declaration to its essential statement of beliefs stating that wives should be submissive to their husbands. Carter announced that he was severing ties with the organization and sent a letter to 75,000 Baptists across the country. According to The New York Times:

Jimmy Carter, a third-generation Southern Baptist and the first United States president to call himself a born-again Christian, has reached what he calls ''a painful decision'' to sever ties to the Southern Baptist Convention, saying that parts of its ''increasingly rigid'' doctrines violate the ''basic premises of my Christian faith.''

Mr. Carter's decision, announced on Thursday in a letter that is being mailed this week to 75,000 Baptists nationwide, comes four months after the Southern Baptist Convention, the country's largest Protestant denomination, declared its opposition to women as pastors.

In the same doctrinal statement, adopted last June, the group advocated a literal interpretation of the Bible. Two years ago, the group called for wives to be submissive to their husbands.

The viral opinion piece "Losing my Religion for Equality" was published later in The Observer in July 2009. The entire op-ed can be read here. We've reproduced the first few paragraphs below:

Women and girls have been discriminated against for too long in a twisted interpretation of the word of God.

I HAVE been a practising Christian all my life and a deacon and Bible teacher for many years. My faith is a source of strength and comfort to me, as religious beliefs are to hundreds of millions of people around the world. So my decision to sever my ties with the Southern Baptist Convention, after six decades, was painful and difficult. It was, however, an unavoidable decision when the convention's leaders, quoting a few carefully selected Bible verses and claiming that Eve was created second to Adam and was responsible for original sin, ordained that women must be "subservient" to their husbands and prohibited from serving as deacons, pastors or chaplains in the military service.

This view that women are somehow inferior to men is not restricted to one religion or belief. Women are prevented from playing a full and equal role in many faiths. Nor, tragically, does its influence stop at the walls of the church, mosque, synagogue or temple. This discrimination, unjustifiably attributed to a Higher Authority, has provided a reason or excuse for the deprivation of women's equal rights across the world for centuries.

At its most repugnant, the belief that women must be subjugated to the wishes of men excuses slavery, violence, forced prostitution, genital mutilation and national laws that omit rape as a crime. But it also costs many millions of girls and women control over their own bodies and lives, and continues to deny them fair access to education, health, employment and influence within their own communities.

The impact of these religious beliefs touches every aspect of our lives. They help explain why in many countries boys are educated before girls; why girls are told when and whom they must marry; and why many face enormous and unacceptable risks in pregnancy and childbirth because their basic health needs are not met.

Carter truly wrote this letter/op-ed. However, the letter is often shared along with the claim that Carter renounced his faith. But that isn't the case. While Carter rejected the notion that women were subservient and severed ties with the Southern Baptist Convention, he never turned his back on his own religion. In fact, Carter occasionally taught Sunday school at the Maranatha Baptist Church in his hometown of Plains, Georgia, long after his viral op-ed was published.