Did Jimmy Carter Say 'America Has No Functioning Democracy at This Moment?'

An old quotation attributed to the 39th president re-emerged on social media in October 2018, prompting criticism of President Donald Trump. 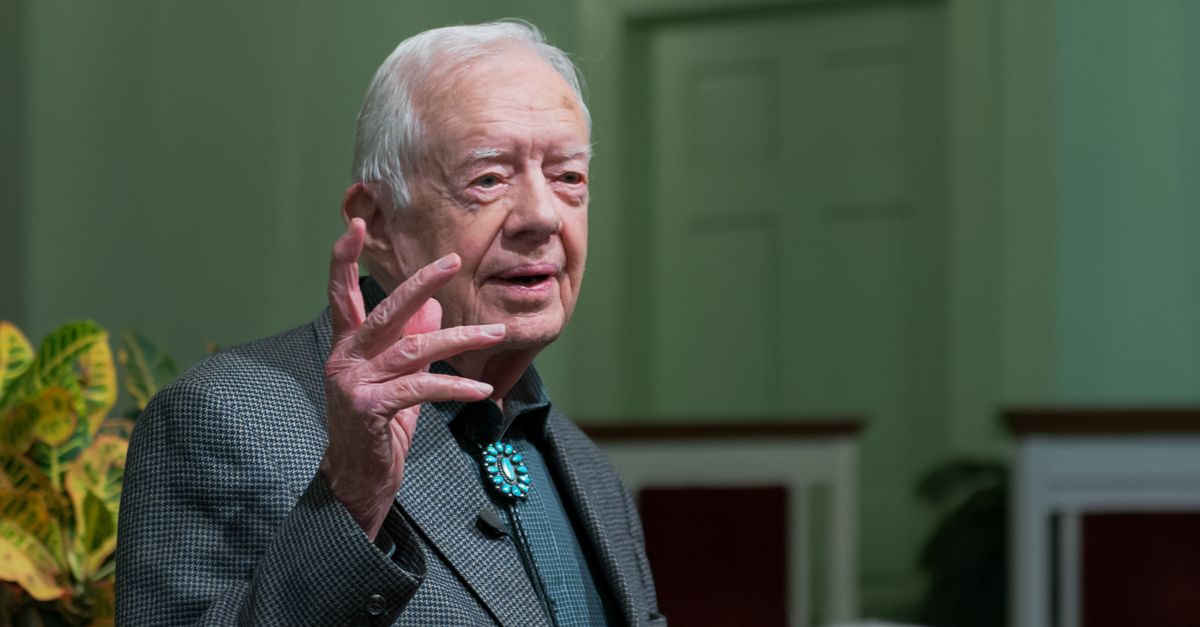 In October 2018, a quotation long attributed to former President Jimmy Carter re-emerged on social media, giving some viewers the impression that he had launched an attack on the politics and government of President Donald Trump.

On 6 October, a Facebook page which presents itself as a bias-free, progressive news source posted a meme containing the statement in question, "America has no functioning democracy at this moment":

Although the meme did not provide a date for the quotation, it's clear that many readers came away with the impression that Carter had made that pronouncement recently, prompting several comments critical of President Trump and his administration.

In reality, former president Carter is reported to have made this dire assessment in 2013, during the administration of former President Barack Obama, and in response to whistleblower Edward Snowden's recent revelations of global electronic surveillance by the National Security Agency.

The source of the quote was a 17 July 2013 article which appeared in the German newspaper Der Spiegel. The relevant section, translated from German, read as follows:

Former US President Jimmy Carter has strongly criticized the American political system following the NSA scandal. "America currently has no functioning democracy," said Carter on Tuesday [16 July] at an "Atlantik-Brücke" event in Atlanta.

Earlier, the Democrat had been very critical of the practices of US intelligence agencies. "I think the invasion of privacy has gone too far," Carter told CNN. "And I believe that secrecy has been excessive for that reason. "Looking at NSA whistleblower Edward Snowden, Carter said his revelations are "likely to be useful in the longer run as they inform the public."

The event in question was a panel discussion overseen by Der Spiegel reporter Gregor Peter Schmitz during the 2013 German-American Young Leaders conference, an annual gathering run by Atlantik-Brücke ("Atlantic Bridge"), a Berlin-based non-profit organization that aims to cultivate political, business and civic society links between the United States and Germany.

Carter can be seen making unrelated remarks in a short video review of the event, posted online by Atlantik-Brücke:

The group also had the opportunity to engage with guest speakers and explore the Atlanta area. Former U.S. President Jimmy Carter explained his work with the Carter Center, as well as his concerns and hopes for the future of democracy in the U.S. and abroad.

The reference to Carter's "concerns and hopes for the future of democracy in the U.S. and abroad" lends credence to the quotation attributed to him in Der Spiegel, but we were not able to find corroboration for it.

A spokesperson for the Carter Center, the former president's non-profit organization through which he often makes public statements, told us by email that they could not verify the "no functioning democracy" statement. We also asked the Carter Center whether they disputed the authenticity of the quotation but we did not receive a response.

A spokesperson for Atlantik-Brücke told us that the organization did not have access to any footage of Carter's remarks other than the few seconds included in the video summary of the event above. We asked Atlantik-Brücke to put us in touch with the person who captured that footage but did not receive a response.

We also contacted Gregor Peter Schmitz, author of the 2013 Der Spiegel article and the sole originator of the quotation in question. We requested any material, such as video or audio footage or contemporaneous notes, which might corroborate the authenticity of the quotation but did not receive a response.

Certain factors lend credence to the authenticity of the quotation: Carter was undoubtedly present at the event in question, his spokesperson did not dispute its authenticity when invited to do so, a separate description of his remarks at the event alluded to his "concerns and hopes for the future of democracy in the U.S. and abroad," and the quotation is in keeping with other statements Carter has made in recent years.

Notably, Carter has given dire pronouncements about the state of American democracy during both the Obama and Trump administrations. Mostly, these assessments have related to the role of money in electoral politics.

In 2015, the former president told Democracy Now's Thom Hartmann that the United States was "just an oligarchy." In response to the Supreme Court's decision in Citizens United, which significantly upheld the right of corporate entities to make political donations, Hartmann suggested that the ruling was a "violation of the principles of democracy," andd Carter replied: "It violates the essence of what made America a great country, in its political system. Now it's just an oligarchy with unlimited political bribery being the essence of getting nominations for president ..."

In September 2017, Carter again raised the specter of the United States as an oligarchy rather than a democracy. In a discussion at the Carter Center, he again cited what he called the "stupid" Citizens United decision and proclaimed: "I would say that we've become kind of more of an oligarchy than we have a democracy, now. The rich people and the powerful people in our country decide a lot of who gets the nomination and therefore who is elected to office -- not just presidents but senators and governors and Congress members."

In a March 2018 interview with PBS News Hour, Carter said Americans had "lost faith in democracy," and that the increased role of money in elections meant "we are moving toward an oligarchy ... compared to a true democracy."

However, despite the eminent credibility of Jimmy Carter's having proclaimed in 2013 "America has no functioning democracy at this moment," this quotation originated with a single news article, and we were unable to retrieve evidence that would corroborate its authenticity.