Did Jimmy Carter Once Help Build Affordable Housing With an Eye Injury?

For more than two years, fans of the president have circulated images and memes of the alleged incident. 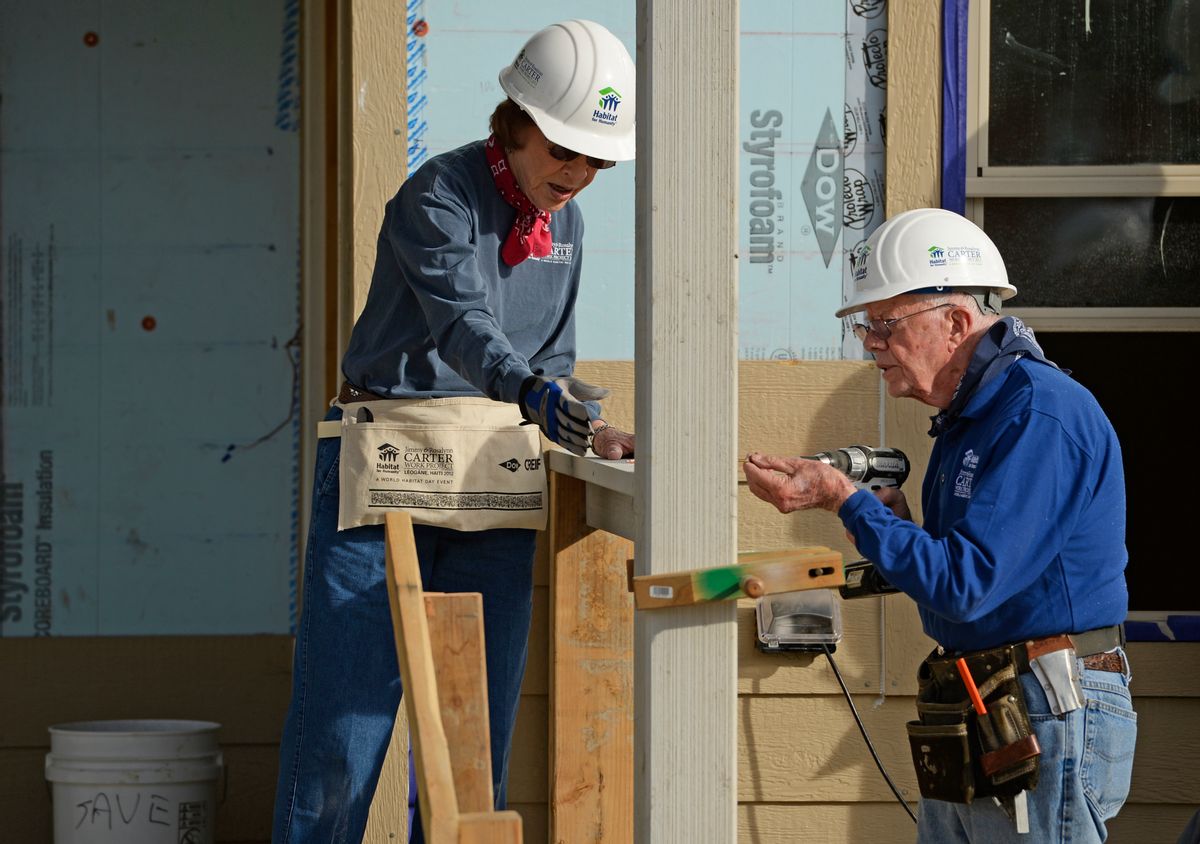 Claim:
On one day, former U.S. President Jimmy Carter fell and injured his head/eye, receiving 14 stitches, and the following day, he helped build houses for Habitat for Humanity.
Rating:

However, the incident happened more than two years ago, as of this writing in April 2022. The injury occurred on Oct. 6, 2019, newspaper archives showed.

For years, liberal social media users have shared photographs or videos supposedly depicting former U.S. President Jimmy Carter doing woodworking with what appears to be an eye injury, apparently to emphasize that his alleged age and medical history hadn't stopped him from volunteering. One Twitter user, for example, posted the below-displayed meme about the 39th president in April 2022: A reverse-image search of the meme revealed numerous instances in which internet users promoted this underlying claim: that Carter, at age 95, fell, received stitches and then the following day helped build houses for Habitat for Humanity — a Christian nonprofit that helps low-income families build homes and pay their mortgages.

[See also: Why Do the Bidens Look Giant in Photo With Carters?]

The claim was true — though the incident had occurred more than two years ago, as of this writing. On Oct. 7, 2019, The Associated Press published the photographs featured in the meme, writing:

NASHVILLE, Tenn. (AP) — With a bandage above his left eye and a large, red welt below it, former President Jimmy Carter was greeted by a cheering crowd Monday morning as he prepared to help build a home with Habitat for Humanity in Nashville.

Carter fell at home on Sunday, requiring 14 stiches, but he did not let his injuries keep him from participating in his 36th building project with the nonprofit Christian housing organization. He turned 95 last Tuesday, becoming the first U.S. president to reach that milestone.

The newspaper reported that he and his wife, former First Lady Rosalyn Carter, worked that day on building corbels, a type of support bracket, for a home.

CNN also reported on the public appearance, including the following quote from the former president in its Oct. 8, 2019, story: “I fell down and hit my forehead on a sharp edge and had to go to the hospital. And they took 14 stitches in my forehead and my eye is black, as you’ve noticed,” he said. “But I had a No. 1 priority and that was to come to Nashville and build houses.”

According to the nonprofit's website, the couple formed a partnership with Habitat for Humanity in the 1980s, and they have rallied "thousands of volunteers and even celebrities" to join the organization's cause since then. However, due to the COVID-19 pandemic in 2020 and 2021, Habitat for Humanity paused its so-called "Jimmy and Rosalynn Carter Work Project," a reoccurring event during which the couple fundraises to build a grouping of homes somewhere.

Interested in presidential trivia? We recently combed our archives to compile exclusive stories regarding presidents’ pets, drinking, alleged extramarital affairs, purported after-death hauntings of the White House — and more. They are listed in order of presidential term here, and include the following nuggets of information about Carter: