Did Jill Biden Give a Speech in Front of a Nazi-Inspired Flag?

The first lady was visiting the first headquarters of the United Farm Workers union. 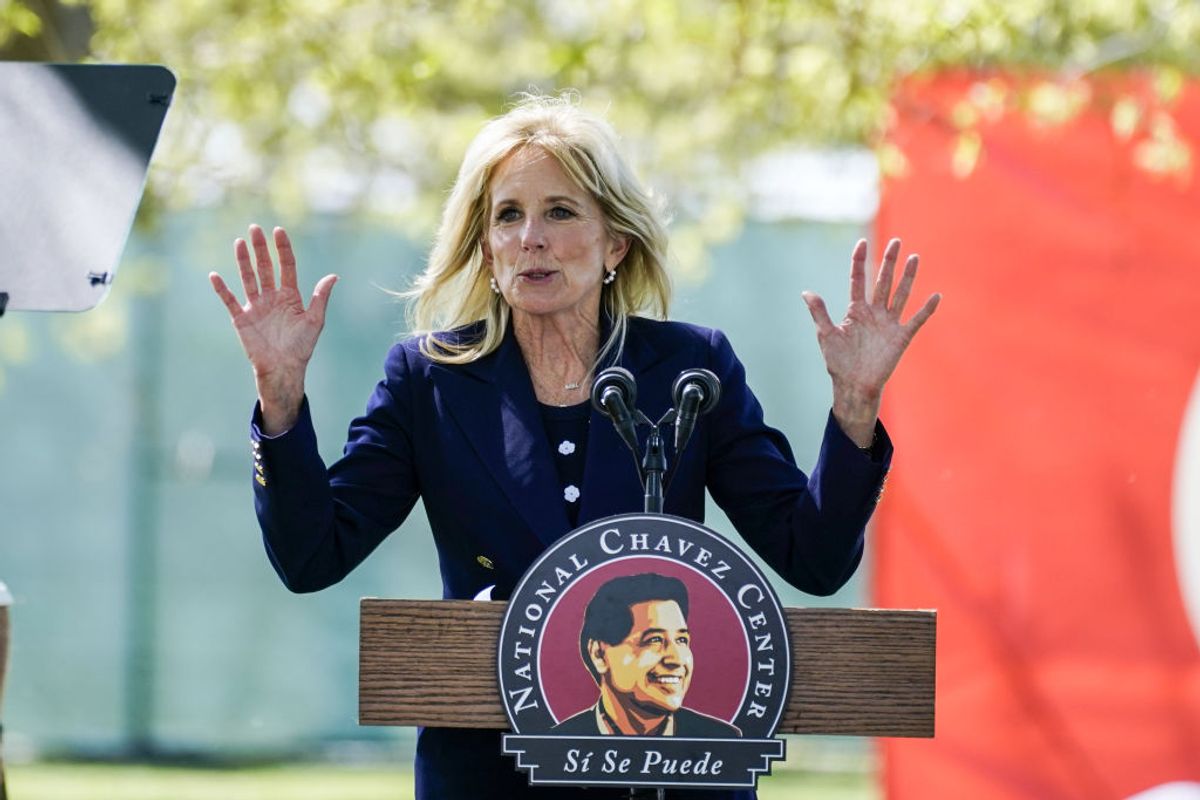 Claim:
On March 31, 2021, first lady Jill Biden stood in front of a Nazi-inspired flag while giving a speech to farmworkers.
Rating:

According to one historian, César Chávez researched color combinations on cigarette boxes and Nazi flags when deciding on the flag for the farm workers' movement. Other historians argued that the flag colors were chosen partly because that shade of red was inexpensive for printers, while others reported Chávez chose “white for hope, black for the plight of the workers, and red for the sacrifice that would be required of them.” Regardless, many experts say associating the flag directly with the Nazi movement is incorrect.

On March 31, 2021, first lady Jill Biden visited the Forty Acres in California, a vaccination site and a National Historic Landmark that became the first headquarters of the United Farm Workers of America (UFW), a labor union for farm workers across the country.

While there, she urged farmworkers to get vaccinated as well. That day, she was also honoring César Chávez, a UFW leader and civil rights activist who died in 1993. During her speech, Biden stood in front of a flag that many on social media claimed was Nazi-inspired. This, we learned, was false.

The flag behind Biden was the UFW’s official flag, which was designed in 1962 by Richard Chávez, César Chávez’ younger brother. The flag depicts an eagle and was inspired by Aztec imagery. According to the UFW website:

In 1962, Cesar Chavez, Dolores Huerta and others founded the National Farm Workers Association, later to become the United Farm Workers. That same year, Richard Chavez designed the UFW Eagle. Cesar told the story of the birth of the eagle. He asked Richard to design the flag, but Richard had problems making an eagle that he liked. Finally, he sketched one on a piece of brown wrapping paper. He then squared off the wing edges so that the eagle would be easier for union members to draw on the handmade red flags that would give courage to the farm workers with their own powerful symbol. Cesar made reference to the flag by stating, “A symbol is an important thing. That is why we chose an Aztec eagle. It gives pride…When people see it they know it means dignity.” Since that time, the UFW Eagle Mark has become a highly recognizable icon in the union’s boycott efforts, legislative, proposition campaigns, and a victorious symbol of its successful contract negotiations.

A Smithsonian magazine article by Miriam Chawel, author of “The Union of Their Dreams,” about the history of the farm workers’ movement did point out that César Chávez had “researched emblems, including cigarette boxes and Nazi flags, and concluded that the most potent color combination was red, black and white.” He then “picked the eagle and directed his brother to draw the bird so simply that anyone could easily replicate the symbol.”

However, another account in 1998’s “The Fight in the Fields” by Susan Ferriss and Ricardo Sandoval, which was a companion book to the PBS documentary of the same name, described a moment that indicated evoking Nazi imagery was not Richard Chávez’ intention. The book describes how he came up with the design for the eagle and how César Chávez chose the colors, “white for hope, black for the plight of the workers, and red for the sacrifice that would be required of them.” The book described the unveiling of their banner at the first National Farm Worker’s Association (which would later become the UFW) conference:

It was time to unveil the association's banner: a square-edged black eagle in a white circle against a red background. Manuel pulled a cord, tearing aside a sheet of paper that had been covering the flag—and gasps rippled through the crowd. Some people immediately left in protest because they thought the flag looked "Communist." Some thought the eagle design was inspired, half in jest, by the label on Gallo's cheapest wine, Thunderbird. To Richard's astonishment, still others thought the colors echoed that of the Nazi flag of the Third Reich.

But experts have largely argued that the flag’s purported association with the Nazi movement was ridiculous. Lauren Araiza, an associate professor at Denison University, told The Associated Press that in addition to red and black being eye-catching colors, the tone of red used in the flag was inexpensive for printers.

Gavriel D. Rosenfeld, a professor of history at Fairfield University who specializes in the history of Nazi Germany, also told The Associated Press that the Nazi-inspiration claims were incorrect.

“One source of subtle confusion may be the fact that many Nazi flags featured an eagle with a swastika, the latter being a very geometric shape; the UFW flag also features a very geometrically rendered Aztec-style eagle that could evoke the geometric aspects of a swastika,” Rosenfeld said. “But of course, there’s no swastika on the UFW whatsoever.”

In sum, César Chávez may have looked at the colors of the Nazi flag, among other emblems, while doing his research on the movement’s banner. But the farmworkers' flag itself is not a Nazi flag, and the logos on it are inspired by Aztec imagery, among other elements. Furthermore, flag designer Richard Chávez had himself indicated he did not take inspiration from the Nazi flags. We thus rate this claim as “False.”