Does a Photo Show Jill Biden Lunging To Protect Joe?

Supporters of the Democratic U.S. presidential nominee shared the photo as evidence of the couple's teamwork. 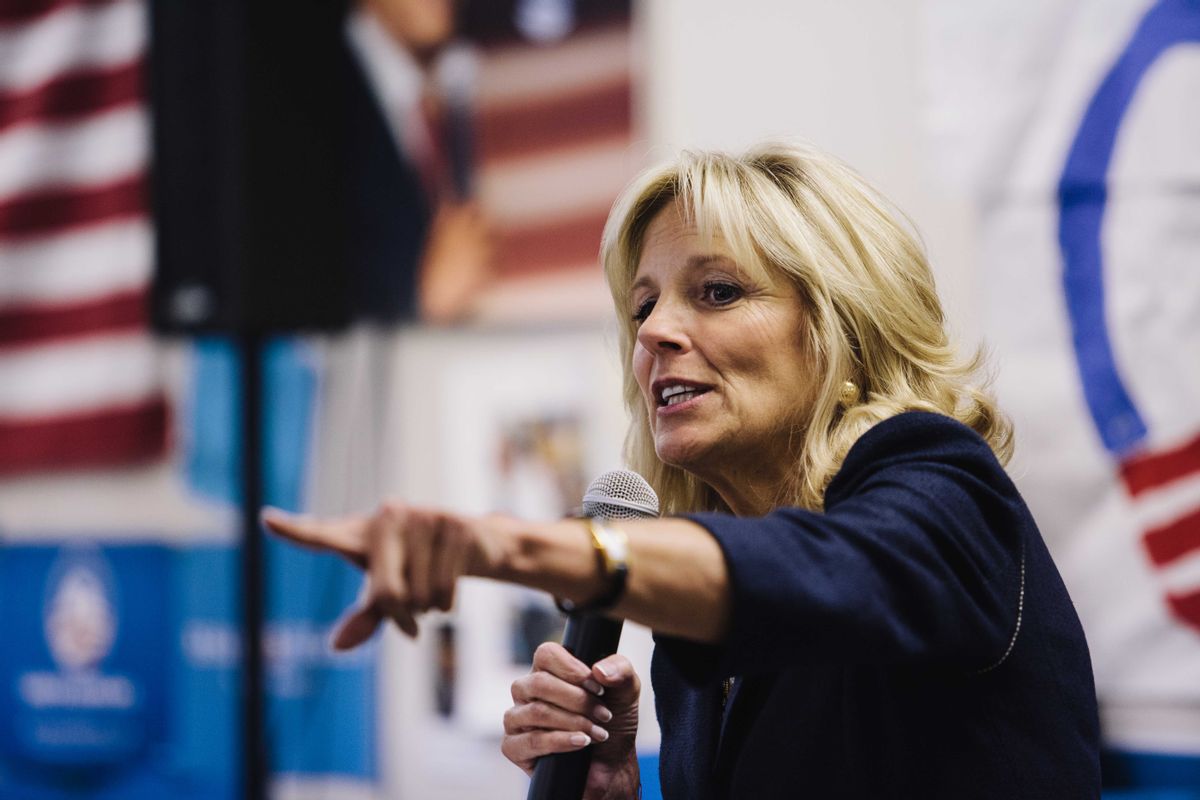 Throughout the presidency of U.S. President Donald Trump, his critics attempted to find evidence of first lady Melania Trump looking unhappy in their marriage. Among such instances was the final of two presidential debates in fall 2020, where some viewers questioned whether Melania had pulled her hand away from the president's as the couple walked off stage.

The moment was captured in a C-SPAN video at roughly the 1:33:34 mark. It was possible that Melania was simply letting go of her husband's hand without expressing a negative emotion toward him, but some of the president's critics interpreted it otherwise. No matter the reason for Melania's hand movement, in the days that followed, supporters of Democratic presidential nominee Joe Biden circulated the below-displayed meme on Facebook in attempt to compare the first lady's attitude toward her husband with that of former second lady Jill Biden. The post read: "Jill Biden leaps in front of Joe to protect him while Melania can barely bring herself to hold Trump's hand in public. Telling. Very telling." In other words, the meme claimed that Jill Biden at one point physically blocked someone who approached her husband during a political event.

We learned the meme includes an actual photo of the Bidens captured by photographer Patrick T. Fallon on Super Tuesday, when the former vice president won the majority of states' primary elections in his quest for the Democratic nomination. The caption for the photo read, per Getty Images' database of photojournalism and other images: "[Biden] watches as his wife Jill Biden, center, blocks a protester from arriving on stage during an primary night rally in the Baldwin Hills neighborhood of Los Angeles, California, U.S., on Tuesday, March 3, 2020."

According to video evidence and news reports, a woman holding a "Let Dairy Die" sign suddenly rushed the stage where the Bidens were thanking supporters. Jill Biden held her husband's right hand, while interposing her body between Joe Biden and the protester. Seconds later, another person rushed the stage. The Washington Post reported:

Reacting with lightning speed, the former second lady swung around, extended her arms, grabbed her by the wrists and then blocked her with a stiff-arm.

Wincing, she pushed the woman back as her husband and sister-in-law looked on with concern during the sudden confrontation.

She was soon joined by Symone D. Sanders, the candidate’s senior adviser, who tackled the woman in a waist lock, and along with other staffers wrestled the protester offstage. [...]

The activists are among the same anti-dairy industry protesters that have previously interrupted events for Bernie Sanders and Sen. Elizabeth Warren (D-Mass.) during the 2020 campaign.

Here's a video recording of the chaotic scene, captured via C-SPAN and circulated by journalist Aaron Rupar:

"We're okay," Jill Biden said afterwards. No serious injuries were reported, and it was unknown what happened to the protesters.

In sum, given Fallon's photograph of the moment — which went viral online in spring 2020 — as well as video evidence, we rate this claim "True."