Did JFK Jr. Write in 1999 That Trump 'Would Be an Unstoppable Force for Ultimate Justice'?

Whatever John F. Kennedy, Jr. might have thought about Donald Trump, he likely wouldn't have described anyone as "an unstoppable force for ultimate justice." 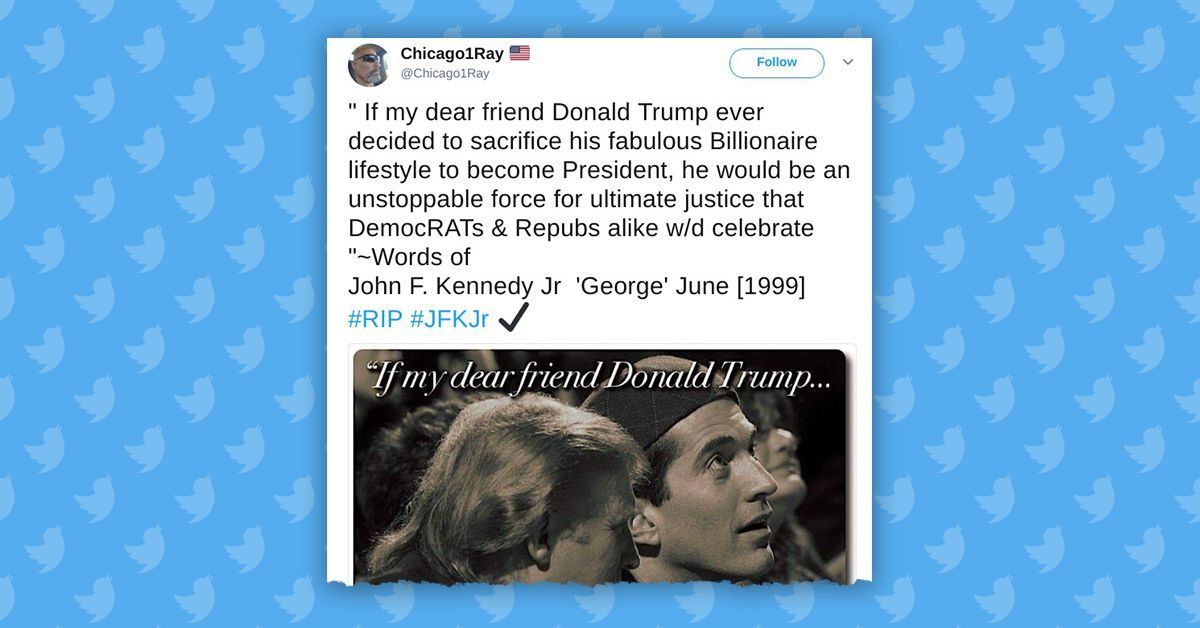 Claim:
John F. Kennedy, Jr. wrote in 1999 that Donald Trump would be "would be an unstoppable force for ultimate justice.'
Rating:

On 18 July 2018, the Twitter account "Chicago 1 Ray" posted an old photograph of President Trump and John F. Kennedy, Jr. (the son of the late 35th President), along with a statement ostensibly published by the younger Kennedy in the June 1999 issue of George magazine about how Donald Trump would make a great president if he ever decided to give up his billionaire lifestyle: This statement was not published in the June 1999 issue of George magazine, nor was it made by John F. Kennedy, Jr. Our attempt to locate the origins of this quotation turned up no credible references to it prior to this 17 July 2018 tweet. It did not appear in any news coverage of Trump's 2016 presidential run, nor of his subsequent election victory.

We also examined the June 1999 issue of George magazine and found that it contained no mention of Donald Trump at all. John F. Kennedy, Jr. launched the magazine in 1995 and served as the publication's editor-in-chief until his death on 16 July 1999. The June issue from that latter year featured actor Liam Neeson on the cover, articles about how the U.S. had gone "gun crazy," war in Yugoslavia, and a closing segment that posed the hypothetical question: "What if [ER actor] Noah Wyle were president?":

(The issue of George that we perused had one page missing, which included John F. Kennedy Jr.'s "Letter from the Editor." We reached out to a few members of the magazine's editorial board to confirm that the statement in question did not appear in the letter from the editor.)

JFK Jr. and Donald Trump did have a social relationship, as demonstrated by this meme's utilizing a genuine photograph of the two attending a New York Knicks basketball game in March 1999. In fact, Michael Berman, one of Kennedy Jr.'s former business partners, said Kennedy once quipped that Trump, not himself, should run for president:

In 1996, Berman said, Kennedy flew a select group of advertisers to Trump’s Mar-a-Lago estate after an industry conference in Florida.

Trump was in attendance at the smaller gathering.

As frequently happened to Kennedy at his events, talk soon turned to whether he could envision himself running for president.

Trying to deflect the presidential chatter, Kennedy noted that the Trump estate was far more glamorous than a Kennedy family compound a few miles away.

“I think you should be asking those questions of Donald,” Kennedy said, according to Berman.

“He’d clearly have the most extravagant winter White House,” the then-35-year-old editor-in-chief said.

However, we found no record of John Kennedy Jr's having issued a glowing endorsement of Trump's political savvy such as the one presented in this meme.

Even if John F. Kennedy, Jr. had written something even vaguely similar, he likely would not have rendered the word "Democrats" with the "RATS" portion capitalized. Kennedy never officially threw his hat into the political ring, but he did introduce his uncle, Sen. Edward Kennedy, at the Democratic National Convention in 1988.