No, 5 JetBlue Pilots Didn't Die From the COVID-19 Vaccine 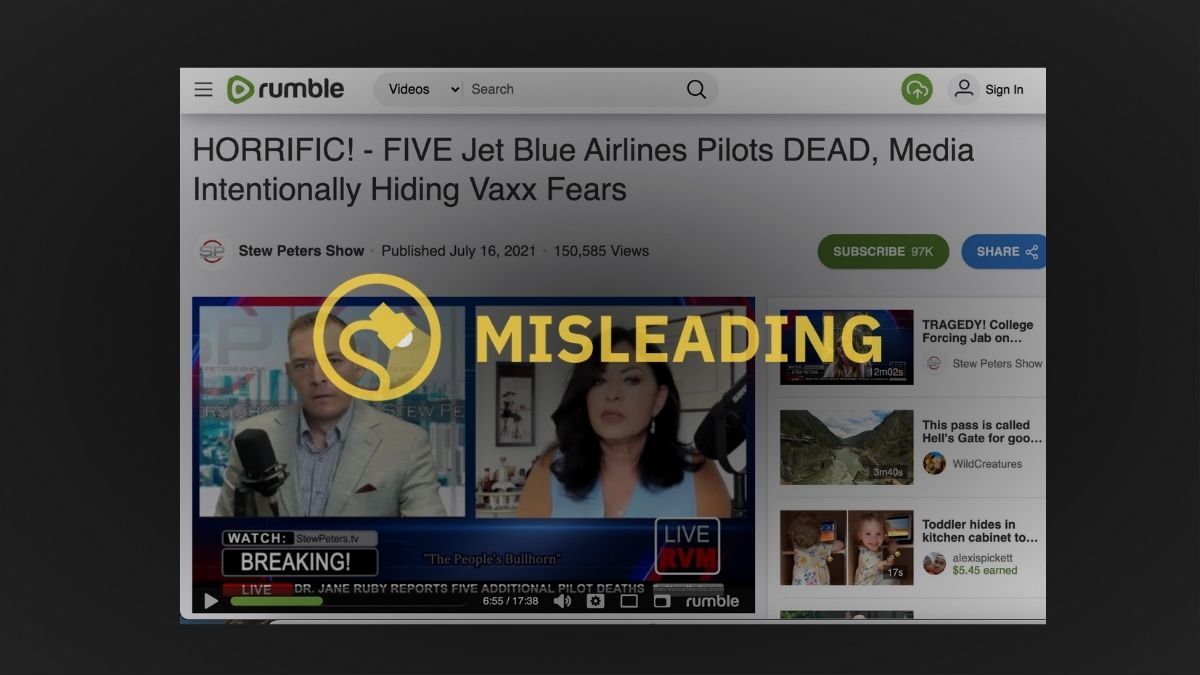 During that July 16 show, Peters and his guest Dr. Jane Ruby (who is not a medical doctor) claimed that five JetBlue pilots died as a result of receiving a COVID-19 vaccine shot. But oddly Ruby also admitted she didn't know whether any of the pilots mentioned even received the shot. (We added bold text to the key portion of the quote below):

This is another bombshell, an airline we have not heard about or from yet. It's JetBlue. A pilot has come forward who's still actively in the company to let us know that five JetBlue pilots passed away between February of this year and May. There's no direct information yet about their jab status. But he, this pilot does acknowledge that the company is keeping that kind of thing very quiet.

Ruby then goes on to name five JetBlue employees who died between February and May of 2021. JetBlue has about 20,000 employees.

In company marketing materials, JetBlue said it encouraged employees to get vaccinated and that the "majority" of crew members had received the vaccine.

In obituaries found online for the JetBlue employees named by Ruby, two mentioned the cause of death. In those cases, the deaths had nothing to do with COVID-19 or the vaccine. One pilot died in a UTV accident. Another died of cancer.

In a statement emailed to Snopes, JetBlue acknowledged that four pilots died in 2021. One employee named by Ruby wasn't a pilot, but an inflight crew member. The company called the video an effort to intentionally mislead the public:

JetBlue is aware of a report that mentions four of our pilots and one inflight crewmember who have passed away this year. While we mourn their loss, there is no connection in their deaths or to the COVID-19 vaccine. The social media video appears designed to intentionally deceive the public and should not be considered a trusted source of information.

The claim that five JetBlue "pilots" died from the vaccine echoes a similar claim about British Airways. That claim was also false and used the same method of apparently trawling the internet for people from the same airline company who died in prior months, then claiming without evidence they died from the vaccine.

Peters and Ruby had previously taken to the show to claim that the vaccines were injected magnets into people, a claim that spectacularly backfired in an attempted live demonstration that went viral:

We are rating this claim "False" because it comes from an unreliable source with a track record for spreading misinformation, and by the source's own admission, there is insufficient evidence to support the claim. We also note that the evidence that is available — namely the cause of death in two of the five cases — directly contradicts the claim.