Did This Man Fly Through the Air with a Jet-Powered Hoverboard Strapped to His Feet?

A video showing a man flying through the air is real, but we're skeptical about the claimed speed of 103 mph. 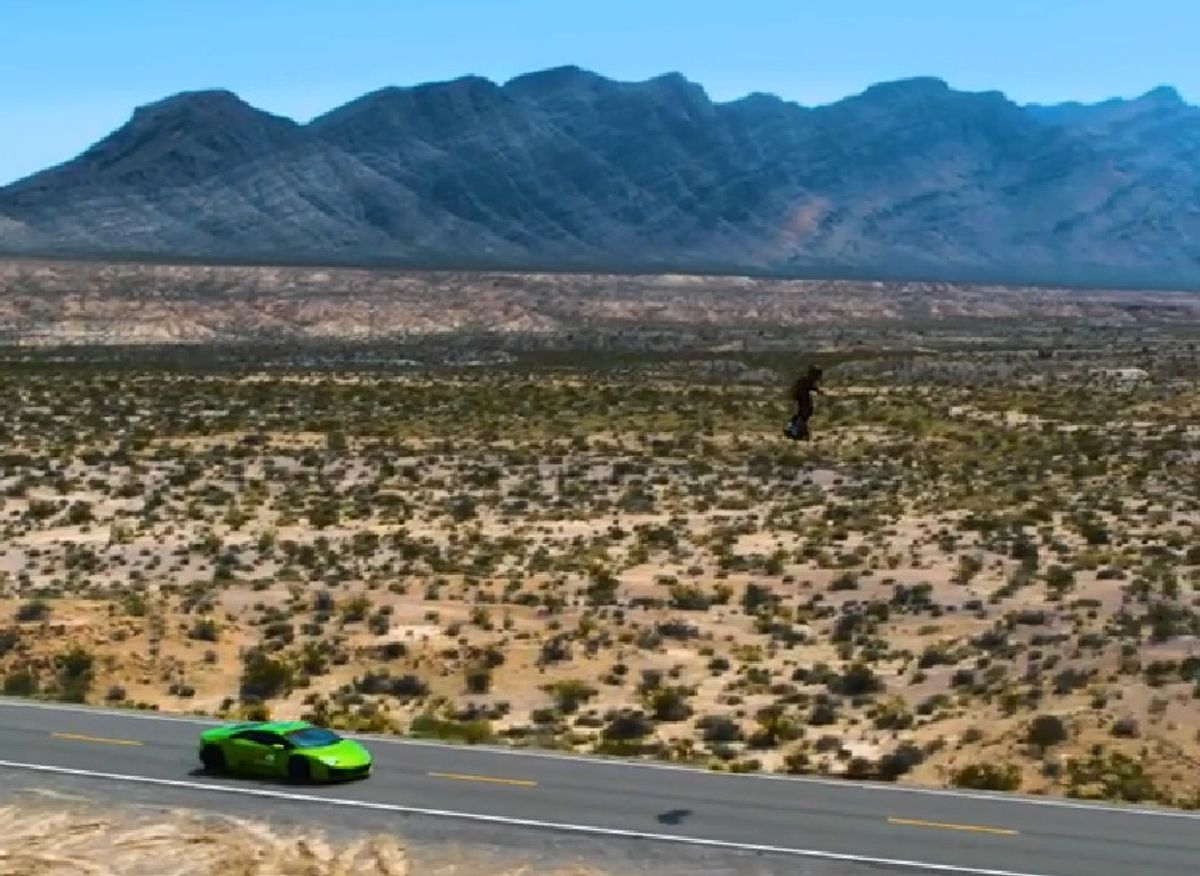 Claim:
A video shows a man flying through the air thanks to a jet-powered engine strapped to his feet.
Rating:

Sometimes seeing is believing. Other times what we see is so incredible as to seem unbelievable. When filmmaker Devin Graham uploaded a video to YouTube on 17 July 2018 showing a man flying through the air in speeds in excess of 100 MPH thanks to a jet engine strapped to his feet, many viewers took to YouTube's comments section to claim that the footage was fake:

Although the video may appear to be presenting something that exists only in the realm of sci-fi, it does capture a genuine stunt performed on a real device capable of propelling a man through the air.

The man featured in this video is Franky Zapata, the inventor of the Flyboard Air, which is billed on his company's website as a "jet powered personal aerial vehicle": The FAQ section of the Flyboard Air web site explains some of the capabilities and limitations of the device. For instance, this jet-powered howeverboard can only travel for about 6-10 minutes before running out of fuel (which is carried in backpack worn by the rider). It runs on Kerosene/Jet B fuel, generates about 110-115 db when in operation, and has a max speed of about 85 mph (more on that later).

Videos of Zapata on one of his flying devices (he also makes a water-based product called a Flyride) frequently draw accusations of footage forgery from skeptical viewers, but Zapata's exploits have been well-documented. Not only are these products available to rent at locations around the world, but Zapata has showcased the Flyboard Air on a variety of programs such as "France's Got Talent," and he even earned a Guinness World Record in April 2016 for "farthest hoverboard flight": Franky Zapata today set a new a new Guinness World Record title for the Farthest hoverboard flight during a spectacular attempt off the coast of Sausset-les-Pins in the south of France.

Rising 50 metres above the surface for the attempt and trailed by a fleet of boats and jet skis, Franky, 37, piloted a futuristic aircraft called the Flyboard® Air developed by his company Zapata Racing.

The video at the top of this article is undoubtedly real. However, we're a little skeptical that the Flyboard Air reached a speed of 103 MPH during this filming session. For one, Devin Graham, the filmmaker who uploaded the video, said in a "behind-the-scenes" clip that the Flyboard can go about "60 to 70 MPH." As we mentioned earlier, Zapata's web site also states that the top speed for the Flyboard Air is 140 km/h (about 85 mph):

To be fair, the efficiency of this product has improved over the years, and Zapata estimates that the FlyBoard Air will eventually travel as fast as 200 km/h (about 125 MPH). It's possible that Zapata has improved on his design since the last time the web site was updated, and that the video truly does show a man with jet engines strapped to his feet speeding along at 103 MPH. As of this writing, however, we consider the claimed speed as unproven.

We've reached out to both Devin Graham and Franky Zapata for information about this video.