A viral video showing a statue of Jesus Christ in a Mexican church 'miraculously' opening and closing its eyes also shows signs of tampering. 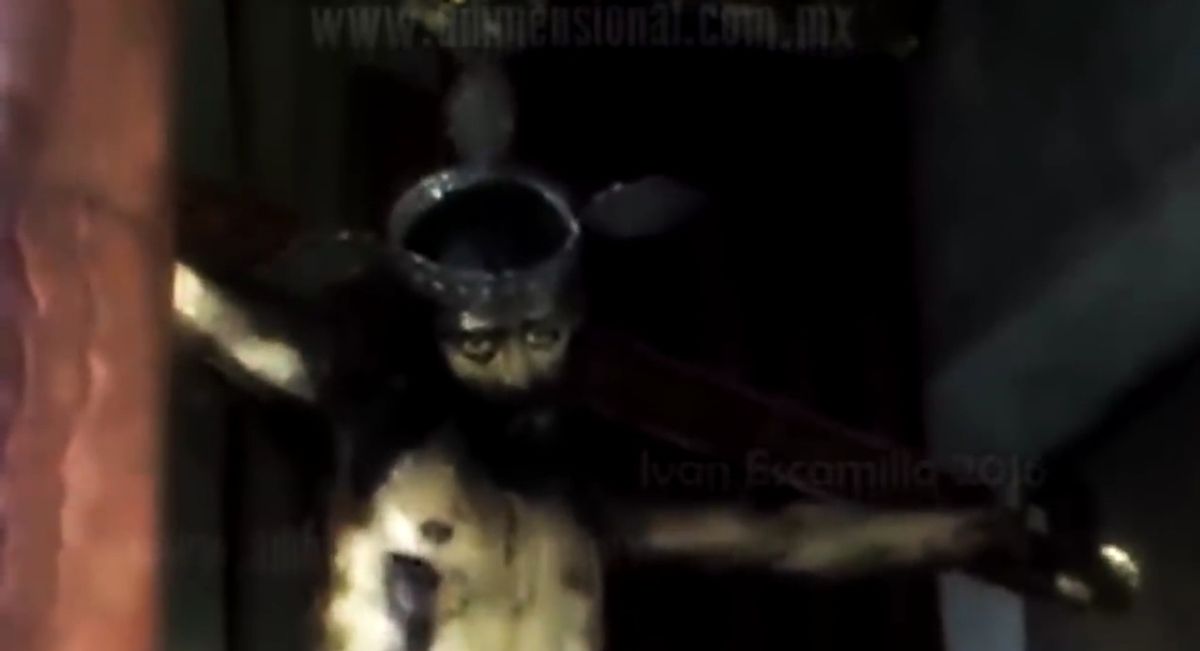 A viral video purporting to show a statue of Jesus Christ in Mexico miraculously opening and closing its eyes captured a fair amount of international media attention in early August 2016.

"SPOOKY footage has emerged of a statue of Jesus appearing to open its eyes, with many believers claiming the spectacle is a miracle," UK tabloid The Sun reported on 10 August. The coverage continued:

Investigators have scoured over the vision which appears to show the figure quickly open its eyes at a church in Mexico.

Social media users were quick to comment on the clip filmed in the Chapel of Saltillo, saying it was merely an optical illusion or Photoshop job.

“What a coincidence that there was someone there to record it,” one person wrote.

Paranormal investigator Ivan Escamilla of the web site Adimensional, where the video was first posted, was undaunted by the skeptical reaction, claiming the video had been examined "for weeks" by more than 20 specialists, including priests, who "found no proof it had been doctored," the Mirror reported. According to the Argentinian newspaper El Ancasti, officials of the Diocese of Saltillo, who were the first to receive the video, declined to even view it, much less issue a statement about its authenticity.

As an exercise in documenting paranormal activity, there is frankly very little to recommend the footage. It's dark, blurry, shaky and low-resolution. As has been pointed out, the serendipitous timing of the video is suspicious. One does see the statue apparently open and close its eyes, but the sequence is more apt to  bring to mind the cheesy special effects in a low-budget horror film than the impression that a miracle has occurred. The most striking thing is how thoroughly creepy and terrifying Jesus Christ's eyes look when they're open. If it is a miracle, it's a very odd miracle indeed.

The best clue to the fact that the video was doctored is the fact that alterations in other areas of the image occur at precisely the same moments the eyes open and close. For example, here, in sequence, are three frames showing the statue's eyes wide open, in the process of closing, and completely closed. Observe the changes in the shadows around the eyes and — not to be indelicate, but this is a giveaway — the change in the shape of Jesus' right nipple: If the only thing happening in these relatively stable frames were the closing of the statue's eyes, no other changes ought to be visible. But changes are visible, especially when the footage is viewed at slow speed or frame-by-frame. For a much better demonstration of this than we can provide here, please give your attention to the video below uploaded by the Australian Phenomena YouTube channel. It seems the maker of this video, a UFO researcher named Dylan, had no trouble whatsoever finding the evidence of fakery that 20 previous experts (and priests) failed to detect.