Is the Modern Face of Jesus Modeled on a 'Gangster's Son'?

Common depictions of Jesus as possessing blonde hair and blue eyes are a rather ahistorical curiosity. 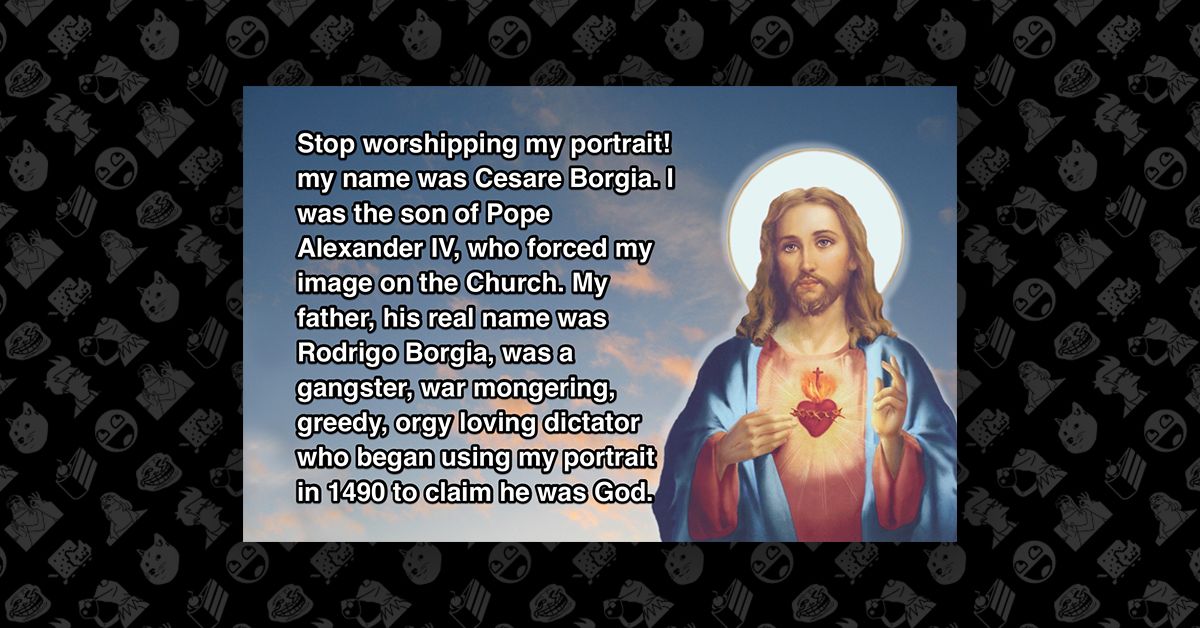 Claim:
The modern image of Jesus is modeled on Cesare Borgia, a gangster's son.
Rating:

Whether modern depictions of the appearance of Jesus are historically accurate has long been a subject of debate, and one rumor related to that debate holds that the modern image of Jesus is largely based on the appearance of Cesare Borgia, a 15th century Italian nobleman.

Claims about Cesare Borgia's likeness forming the basis for all modern depictions of Jesus are scattered. An online "encyclopedia" of dubious merit asserts the rumor as a "little known fact," crediting French novelist Alexandre Dumas for the notion that Borgia "influenced many images of Jesus Christ painted during and subsequent to his career."

Dumas was, while celebrated, a writer of fiction and not an historian. The rumor is frequently attributed to "Volume I" of Dumas' Celebrated Crimes (The Borgias), but we were unable to locate an expression of it in that essay.

Myriad online image macros assert that Borgia's father "forced" his son's visage into art history (a claim offered as an irony given that the Borgia family were supposedly "not Christ-like"), but no evidence ever accompanies such assertions: Such images imply that the relatively standardized, modern depiction of Jesus emerged in approximately 1490, but art historians might argue otherwise. Although the Renaissance produced a vast quantity of the most prominent depictions of Jesus, plenty of artworks antedating 1490 bear the same visual qualities that were purportedly based on those of Borgia:

The need for representations of Christ’s life in Italy was based on official practice within the Western Church. From the time of Pope Gregory the Great, images were valued both as lessons for the unlettered and as aids to worship. Scenes from Christ’s life were thus desirable in churches, on frescoed walls and painted altarpieces, and also in portable form, in illustrated books and small altarpieces suitable for private consumption. Images were meant to enhance the experience of the faithful both in communal and in individual worship, and devotional treatises gave instructions for how to use pictures to enter more fully into sacred history. In the fourteenth and fifteenth centuries, such pictures often occurred in series that allowed viewers to trace the progression of events, but the stories of Christ’s life were also represented in independent easel paintings, especially in the sixteenth century and after.

Contrary to claims that Jesus' now-common characteristics emerged in 1490, artworks from the Middle Ages and Early Renaissance depicted Jesus in very much the same way that later artworks did. Giotto di Bondone's well-known 1305 mural The Lamentation of Christ features a white man with long brown hair, and Sandro Botticelli's 1487 Madonna of the Pomegranate depicts a similarly featured infant Christ. Hieronymus Bosch's Ecce Homo also antedates 1490 but demonstrates a recognizably familiar Jesus, as does Duccio di Buoninsegna's early 1300's Christ's Farewell to his Apostles (and other works) and Bondone's contemporaneous Last Supper (a very commonly depicted scene across time).

The similarities in Jesus' image extend to other regions and movements, with Flemish Renaissance depictions antedating 1490 but still fitting the common pattern. A long haired, pale-skinned Jesus was observed in artworks from 1250 and centuries prior. Clearly, 1490 was in no way the year, or even the millennium, in which the most common characteristics of Jesus' depiction in art were solidified. Moreover, limitations in the transmission of ideas and trends in that era was such that;the establishment of a "new Jesus" would have taken years to propagate across countries and cultures in Europe.

Many image macros assert that Cesare Borgia was the son of a corrupt gangster, a criminal, a dictator, and a sexual deviant. Although Borgia is historically established as one of the likely illegitimate children of Pope Alexander VI (born Rodrigo Borgia), reference works describe the elder Borgia as a controversial Pope but not a "gangster." It's widely held that Pope Alexander VI's checkered reign led in part to the backlash heralding the Protestant Reformation, but historical literature doesn't describe him as a "dictator." As for Cesare Borgia himself, he was born in 1476 and died at the age of 31 in 1507, so had his image been used as the model for Jesus in artworks created in or before 1490, those works would have been based on the features of a young teenager.

Cesare Borgia of course lived centuries before the advent of cameras, so the most common image we have of Borgia now is a portrait of disputed provenance: The scant record includes another portrait which bears no noteworthy resemblance to either contemporaneous 15th century or modern depictions of Jesus: In 2001 forensic anthropologist Richard Neave created a model of a Galilean man for a BBC documentary, Son of God, working on the basis of an actual skull found in the region. Neave did not claim his model showed Jesus's face but rather offered it as a means of prompting people to consider a Jesus who looked like a man of his time and place, since the Bible does not describe Jesus as having distinctive features: Much like conspiracy theories based primarily on modern photographs, the claim that depictions of Jesus originated with a portrait of Borgia appear to hinge almost entirely on negligible visual similarities in multiple artworks and the efficacy of suggestion.

No specific painting is routinely cited as one for which Cesare Borgia purportedly sat as a model (or which he inspired), and oddly enough, the image most commonly associated with this rumor was painted in 1940 and bears no resemblance to the few extant Borgia portraits.

The Walters Art Museum.   "Altar Frontal with Christ in Majesty and the Life of Saint Martin."     Accessed 2 January 2017.