"Now you're going for the kill shot. The kill shot with an ambush, deadly," Watters told attendees at a conservative political conference. 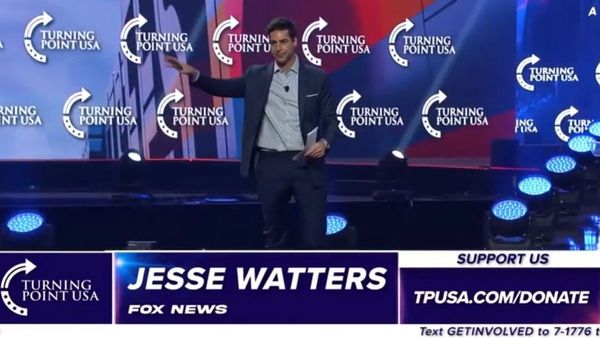 Speaking about Fauci during a December 2021 speech, Watters said: "Now you're going for the kill shot. The kill shot with an ambush, deadly. Because he doesn't see it coming." However, contrary to how some commentators interpreted these remarks, Watters was instructing his audience on how to confront Fauci with questions in order to get viral clips for Fox News. Despite using violent language to convey his message (i.e., "ambush," "kill shot," and "Boom. He's dead.") the context of Watters' remarks does not support the allegation that he literally urged people to kill Fauci.

On Dec. 20, 2021, a brief clip of Fox News host Jesse Watters speaking about Dr. Anthony Fauci, U.S. President Joe Biden's chief medical adviser, at a Turning Point USA conference went viral on social media. In the clip, Watters can be heard saying "Now you go in with the kill shot -- deadly. Because, with an ambush, he doesn’t see it coming."

As this video circulated online, many people commented that Watters should be arrested or fired for supposedly encouraging violence against Fauci. Some even claimed that Watters had called for Fauci's "assassination":

While this clip is real, and while Watters certainly used inappropriately violent language, this clip is missing context. Watters made this comment while instructing the audience on how best to verbally confront Fauci in public in order to generate viral clips for Fox News.

Watters comment can be heard around the 2:24:00 minute mark of the following video. We've transcribed the relevant portions below:

"Let's pretend this podium is Fauci. It's about the same size. You gotta ambush a guy like Fauci. This is how you do these ambushes like [conservative activist and Project Veritas founder James] O'Keefe. You've gotta be respectful. Because they'll turn the tables on you and you can't have it blow up in your face. So if you see Fauci out and about and you know he's coming to town this is how you approach."

Watters then talked about various tactics people could use to confront Fauci in public. He instructed the audience to introduce themselves, to accuse Fauci of lying about his research (a generally false statement), to wave a blank sheet of paper in Fauci's face, falsely claiming that it's a research grant, and then to go in with what he described as the "kill shot" question:

So now he's in trouble. Now you're going for the kill shot. The kill shot with an ambush, deadly. Because he doesn't see it coming. This is when you say. 'Dr. Fauci, you funded risky research at a sloppy Chinese lab. The same lab that sprung this pandemic on the world. You know why people don't trust you, don't you?'

Booooooom. He's dead. He's done. Now you do that, 30 seconds, that's all you need. Now you get that footage to us .... Imagine Tucker Carlson teases out of the block "coming up, brave college student confronts lord Fauci at dinner. Exclusive footage." Get us that. That's what we want.

Watters does appear to be instructing people to verbally harass Fauci, and he did use violent, irresponsible language -- words such as "ambush" and "kill shot" -- during these remarks. However, he was not telling the crowd to assassinate Fauci. He was saying to "ambush" Fauci with questions.

While Watters did not literally call for Fauci's assassination, as some claimed on social media, the loaded language he used while calling on the public to confront Fauci left many people concerned for Fauci's safety. On CNN, Fauci said that Watters' comments were awful, and that Watters should be fired.