Did an NFL Owner Order His Players to Stand During the National Anthem?

An NFL owner didn't tell his players they were "actors" playing the role of "patriotic super heroes" and therefore had to stand during the playing of the U.S. national anthem. 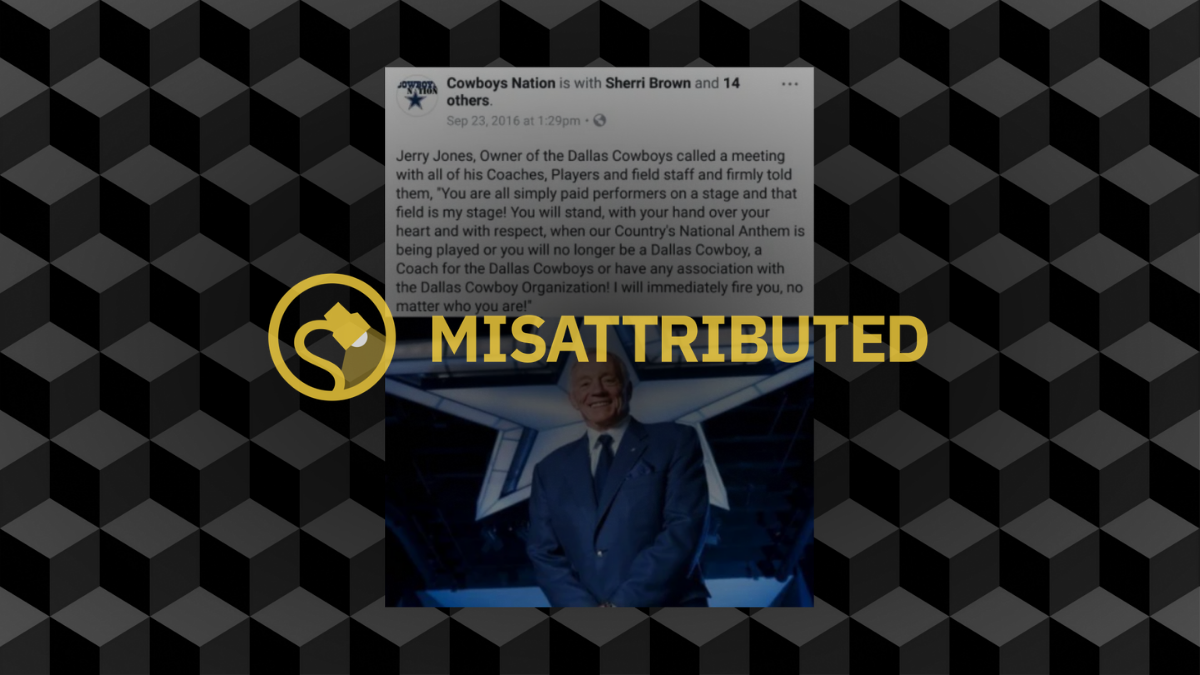 Claim:
An NFL owner told his players they were "actors" playing the role of "patriotic super heroes" and therefore had to stand during the playing of the U.S. national anthem.
Rating:

Before the start of the 2016 NFL season, San Francisco 49ers quarterback Colin Kaepernick touched off a nationwide controversy declining to stand during the pre-game playing of the U.S. national anthem, holding that he was engaging in a form of protest that involved refusing to "show pride in a flag for a country that oppresses black people and people of color." As other players around the league began picking up on Kaepernick's protest and also "take a knee" during the playing of the anthem, rumor began to spread that entire teams might opt to do the same before games played on the anniversary of the 9/11 terrorist attacks on the U.S.

In the aftermath of that event (which saw some players, but no teams, declining to stand during the anthem), an item was circulated online holding that Dallas Cowboys owner Jerry Jones went into the locker room before his team's game on 11 September 2016 and informed his players that they were "actors" playing the role of "patriotic super heroes" and therefore had to stand during the playing of the U.S. national anthem that day:

Jerry Jones went into the locker room before the Cowboys Giants game yesterday. He looked around at all the young men and addressed them as a group. “Regardless of your personal opinions, this is a sacred day that we recognize the sacrifice and pain that so many have endured. When the National Anthem is played by a lone trumpet player in a few minutes you WILL stand and you WILL put your hand over your hearts.” Jerry waited a second and made eye contact with several players to make sure his words had sunk in. He knew he had there undivided attention and proceeded. “You gentlemen are world class athletes, but you are also actors. You perform on a stage that is 100 yards long. Today, you play the role of a patriotic super hero. You will play this role well because you know that millions of children will be watching and looking at your example.” Then his inner fire started to shine through as he said quietly “but most of all I want you to remember, you are the actors, but this is MY stage and you will play the role I tell you to.”

Every young man on the Dallas Cowboys understands that there is a time and place to express your opinion. Maybe when honoring the fallen is not the right time to give the wrong impression to millions of fans.

However, this item did not originate with a report by news organization and does not relay a real incident that took place between Jones and Dallas Cowboy team members. This dialogue was an invented one posted by Facebook user "Richie Newberry" in an attempt to make a point about the NFL players who chose to kneel or sit during the national anthem as a protest of social injustice.

The Facebook post referenced above depicted two scenarios: In the first, Jones told his players that they must stand for the national anthem; in the second, the players recognized the importance of the day and made the decision on their own.

A slightly altered version of this fake quote was also circulated on social media: Although Jones didn't actually deliver this fiery pre-game speech, he did say after the game that he was proud of his team for standing during the national anthem and disappointed in the players on other teams who didn't:

"I got to give a big pat on the back to our entire team, our coaching staff, our entire organization," Jones said. "We strongly, strongly support the flag. In every way, we support — it's almost ridiculous to be saying it — the people that for generations and generations have given it all up so we can get out here and show off in front of millions of people on television. We respect that so much. That's the real business.

"The forum of the NFL and the forum on television is a very significant thing. I'm for it being used in every way we can to support the great, great contributors in our society and that's people that have supported America, the flag, and there's no reason not to go all out right there. For anybody to use parts of that visibility to do otherwise is really disappointing."

A later version of this item was altered to attribute the speech to "Clark Hunt, CEO and owner of the Kansas City Chiefs."

On 25 September 2017, amid a fiery debate over whether professional athletes are correct in kneeling in conjunction with the national anthem to protest violence by police against civilians, Cowboys players and owner Jerry Jones all linked arms and kneeled together in a sign of unity prior to the anthem:

The Cowboys and owner Jerry Jones locked arms and took a knee in unity prior to the national anthem pic.twitter.com/7kK3qVMDSo

Despite the fact that Jones knelt arm in arm with Dallas Cowboys players prior to the national anthem on 25 September 2017, fake quotes attributed to the team's owner continued to circulate on social media: Go on ahead son, you can take a knee. Protest the very thing that gives you the freedom to take that knee. You have that right. But remember, I too have rights. So you go ahead, and you take that knee. Me? I'ma go look for your replacement.

Although Jones did not utter the quotes above, the Cowboys owner appeared to muddy his position on the protests on 8 October 2017 when he said: "If we are disrespecting the flag then we won't play."