Conspiracy theorists scraped another barrel in their attempt to tie Bill and Hillary Clinton to the death of Jeffrey Epstein. 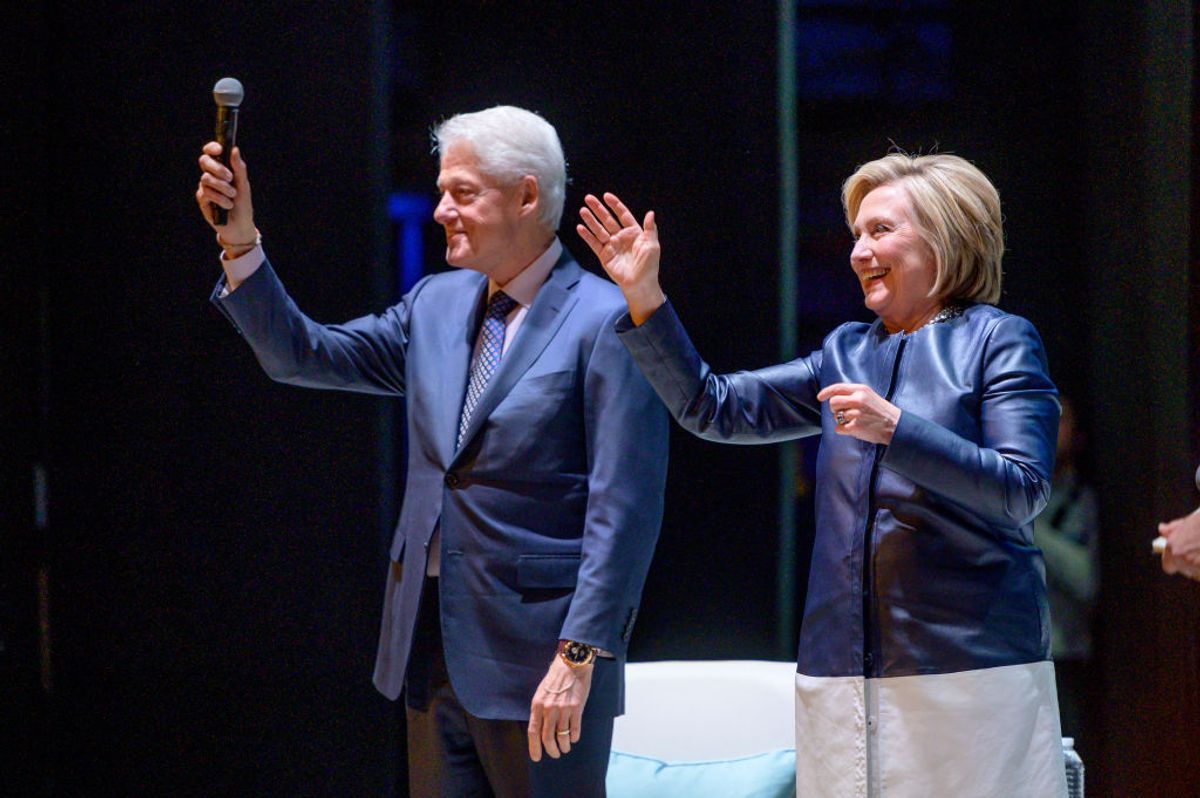 In late 2019, we received multiple inquiries about a conspiracy theory that tied Jeffrey David Cox, a union leader, to the death of disgraced financier Jeffrey Epstein.

On Nov. 22, for example, a Facebook user posted a photograph of Cox, who is president of the American Federation of Government Employees (AFGE), shaking hands with former U.S. Secretary of State Hillary Clinton. The photograph was accompanied by the following caption:

"Jeffrey David Cox (in Google, real name just David Cox) is the head of Federal Prison Guards in Manhattan. Jeffery is the boss of the guards who were supposed to keep Jeffery Epstein alive while in the Metropolitan Correctional Center in Manhattan. He also is friends with Bill and Hillary Clinton. This is such a small world..." Another widely shared meme featured a screenshot of a post that included photographs of Clinton and Cox shaking hands and the following text:

"Just another coinky dink connection to the famous couple. Say hello to Jeffrey David Cox the head of Federal Prison Guards in Manhattan. Jeffery [sic] is the boss of the guards who were supposed to keep Jeffery [sic] Epstein alive while in the Metropolitan Correctional Center in Manhattan. He also is friends with Bill and Hillary Clinton. You cant [sic] make this stuff up." Former President Bill Clinton was an acquaintance of Epstein and has acknowledged having visited his home and traveled on his private plane on several occasions. However, no evidence has emerged showing that Clinton had any knowledge of Epstein's sexual offenses during that time.

Epstein died in prison in New York in August while awaiting trial on sex trafficking charges. An initial autopsy ruled his death a suicide by hanging, but some experts have said the specific injuries he suffered were more commonly associated with homicide by strangulation, rather than suicide by hanging.

Both the FBI and the Justice Department's Inspector General were conducting investigations into Epstein's death as of Dec. 4, 2019. In November, two prison guards at the Metropolitan Correctional Center in Manhattan were charged with falsifying records associated with their oversight of Epstein's cell on the night of his death.

Many claims and theories surrounded Epstein, before and since his death. Among them was speculation that the billionaire, who was convicted of child prostitution charges in Florida in 2008, may have acquired compromising evidence about purported sexual wrongdoing on the part of certain influential public figures, and that he might have provided prosecutors evidence or testimony about others in exchange for more lenient punishment in his own pending sex trafficking case.

In August 2019, President Donald Trump (who was himself an acquaintance of Epstein) shared a tweet that promoted the unfounded conspiracy theory that Epstein was killed at the behest of the Clintons because he "had information on Bill Clinton."

The memes about Cox in November and December 2019 were a further twist on the baseless conspiracy theory that the Clintons were responsible for the death of Epstein, as a means of preventing him from sharing damaging information or evidence about Bill Clinton, and even the premises of the Cox theory were factually flawed.

Cox is president of the AFGE, a national union of federal government employees. His role is not specific to federal prison employees. Contrary to claims made in the memes, he is not "the head of federal prison guards in Manhattan" or "the boss of the guards who were supposed to keep Epstein alive." The warden of the Metropolitan Correctional Center at the time of Epstein's death was Lamine N'Diaye. Union leaders like Cox are not employers or supervisors, and their role is to lobby on behalf of their members on a collective basis, not to micromanage the work of individuals, or to provide them instructions.

The website WhatDoesItMean.com — a notorious serial producer of anonymously sourced conspiracy theories and sensational predictions that never come to pass — described Cox and another AFGE official, Serene Gregg, as being personally in control of "the hiring and scheduling of prison guards."

This is a ludicrous assertion, akin to claiming that the president of the National Education Association is personally in charge of hiring teachers at public schools throughout the country, as well as organizing their recess duty schedules. WhatDoesItMean.com was also responsible for the baseless claims that the Clintons had gifted Cox and Gregg multi-million dollar homes in China, as part of what the website described as an "international murder for hire hit contract" against Epstein.

Cox appears to have been chosen as the focus of the conspiracy theory not due to any part in an actual conspiracy, but because of his extremely tenuous, aforementioned link to the guards in charge of Epstein's cell (they were federal employees and he is the national president of a federal employees union) and because he has been photographed in public with Hillary Clinton.

The photograph shown in the memes was authentic, but it had a mundane explanation. In November 2015, Hillary Clinton and U.S. Sen. Bernie Sanders both took part in an AFGE forum. Labor unions form a key component of the Democratic party's base, so it was unremarkable that the two leading Democratic primary candidates should meet with officials from the country's biggest federal employees union during the course of the presidential primaries.

Since Cox was president of the union and appears to have chaired the forum, it was also entirely normal for Clinton to pose for photographs with him, which she did, as can be seen on the AFGE's Flickr profile.

According to Vox.com, Cox was an unpledged "superdelegate" at the 2016 Democratic National Convention, and he publicly supported her nomination. Cox might be "friends with Bill and Hillary Clinton," as one of the memes claimed, but we found no publicly available evidence that he has a relationship with either Clinton that goes beyond the cordial dynamic that one would expect between a leading national labor union official and two historically powerful figures within the Democratic party.

Thus, the Cox-Clinton conspiracy theory is both without any specific factual basis, but it is also based on erroneous premises — that Cox is so close and so fiercely loyal a friend to the Clintons that he would organize a murder on their behalf, and that Cox, despite being a Washington D.C.-based official in a federal employees union, personally oversaw the hiring and scheduling of specific prison guards at one particular federal correctional facility in New York.