Did Jay-Z and Beyonce Buy DMX's Masters to Benefit His 17 Kids?

The sale was rumored to cost $10 million. 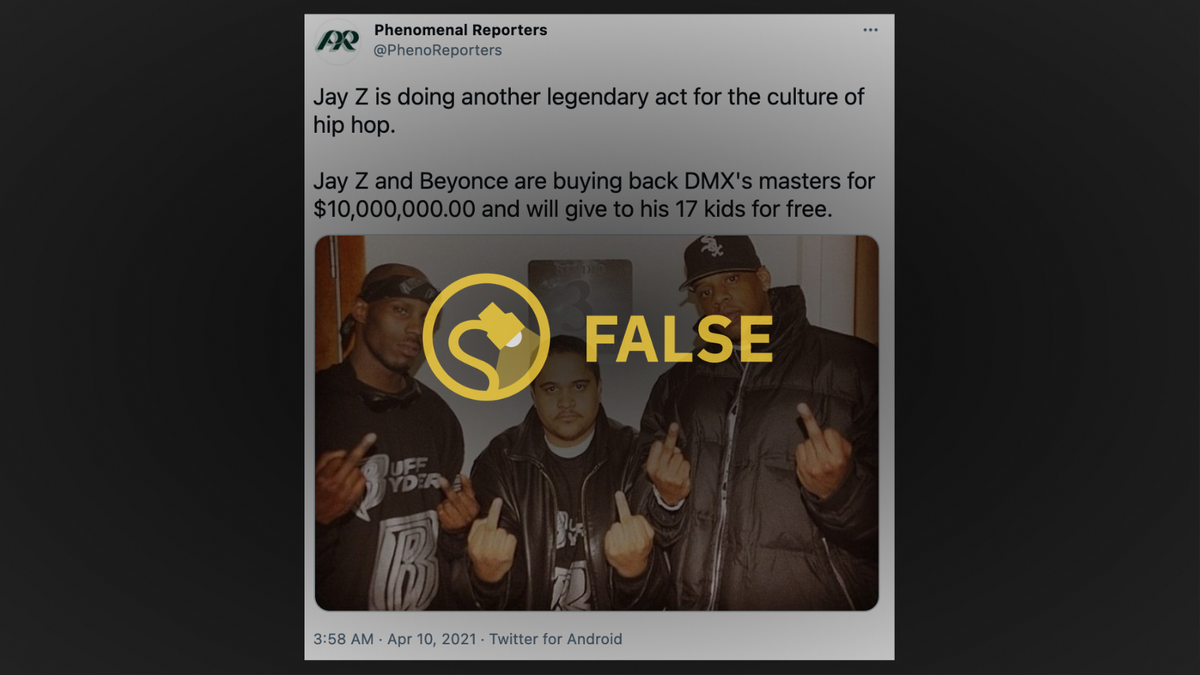 Claim:
After rapper DMX’s death in April 2021, music power couple Jay-Z and Beyonce bought the rapper’s original song recordings, known as “masters,” for $10 million in order to give all proceeds to his 17 children.
Rating:

On the heels of American rapper DMX’s death in April 2021, a number of online rumors circulated online about the circumstances in which he died and what was to be done with his estate.

One such rumor claimed that hip hop royalty and married couple, Jay-Z and Beyonce, were set to buy DMX’s collection of original recordings for $10 million with the intention of giving all proceeds to his “17 kids for free.”

The original claim was shared to Twitter by Phenomenal Reporters, an unverified account. The Facebook page associated with Phenomenal Reporters, which describes itself as “a current affairs newspaper” that “reports without fear or favor,” was registered to Delta State Warri in Nigeria, and though an email and phone number is provided, there is no official website connected to the social media accounts.

“We believe in fairness and professionalism. We do not encourage or share hate speech, racism, tribalism, false news and adult content,” the page description read. Much of the content shared by Phenomenal Reporters used emotionally stirring language and does not link to credible news sources.

Similar claims were shared on Twitter, alleging that the money will be given to DMX’s “17 kids so they can have money” — but it was not made clear whether that money would come from future profits of sales associated with that music or some other source. Additionally, the tweets in question did not link to any reputable news sources, nor did the posters name their sources. We also found no public announcements from Jay-Z or Beyonce regarding any pending sales or future plans to acquire DMX's masters.

This lack of transparency and a closer look at DMX’s musical copyright records suggests that this claim is “False.”

DMX, whose real name is Earl Simmons, died on April 9 after suffering a heart attack less than a week earlier. As of this writing, it is not yet known what prompted the 50-year-old’s heart attack but speculation has pointed to drug overdose and even the COVID-19 vaccine (Unproven).

A “master” is a term typically used to describe the original sound recording and copyright of a song. When an artist or label records a song, they are also creating an original sound that is protected under U.S. copyright law, leaving the owner with the right to do what they want with the work, such as grant third-party licenses, according to the U.S. Copyright Office.

A look through the copyright public records showed that as of April 11, DMX’s most well-known records were not registered to either Jay-Z or Beyonce. DMX’s first released 1998 album, "It’s Dark and Hell is Hot," was registered on May 5, 1998, to Rush Associated Labels Records and published by the record label Def Jam Music Group (314 558 227-2), which is owned by Universal Music Group. (Jay-Z took over as the CEO and president of Def Jam in 2004 but did not renew his contract for the role in 2007.)

Copyright registrations for some of DMX’s other most well-known albums revealed the following:

Furthermore, DMX is the father to 15 children by nine different women — not 17 as the post in question claimed.

Because this claim was not corroborated by any credible reports, and a look through the most current copyright filings did not reveal any links to Jay-Z or Beyonce, we rate this claim “False.”