Did Janet Reno Advocate the Prohibition of Private Firearms?

Although Janet Reno spoke at length about guns in December 1993, a controversial quote attributed to her on the subject was fabricated. 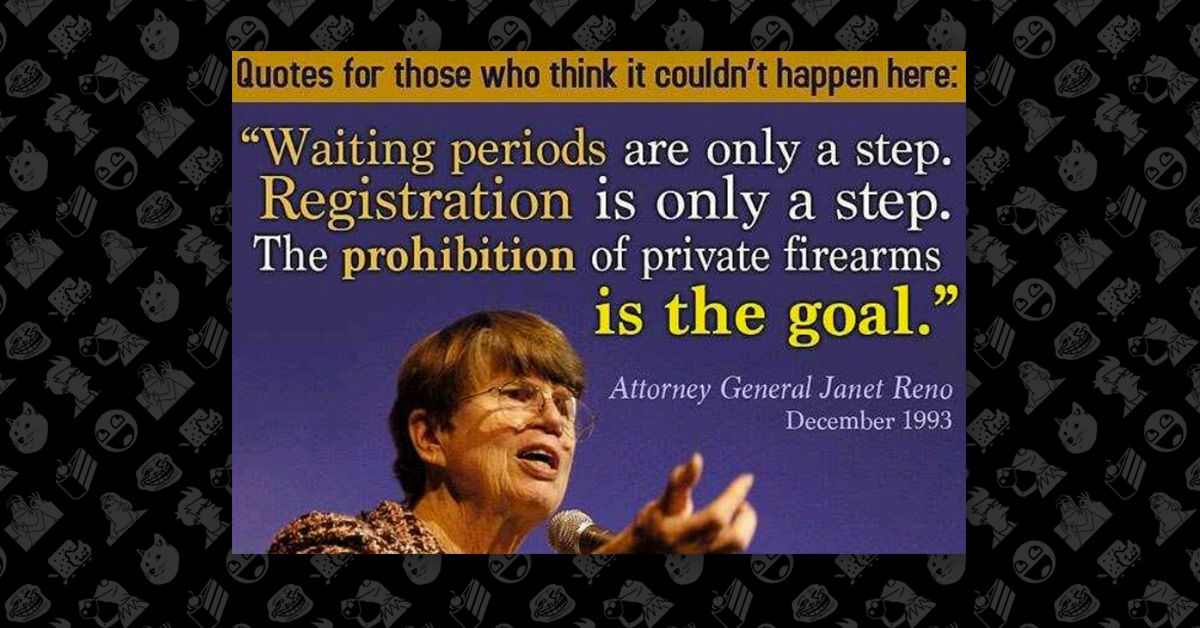 Claim:
Janet Reno said in gun control that waiting periods and registration were a "step," but "prohibition of private firearms" remained "the goal" of such measures.
Rating: Most versions of this meme claimed that Reno made the remarks during a Good Morning America appearance in 1993 However, we were unable to find evidence Reno appeared on that program on the specified date. IMDb listed the date's guests as Dean Cain and Teri Hatcher, and a subsequent episode featured Ann-Margret and Kurt Russell. The site's episode database appeared to show which personalities appeared on Good Morning America on those dates in 1993, and Reno wasn't listed as a guest on any of them.  Additionally, Janet Reno's personal IMDb page listed a number of television appearances, none of which were on Good Morning America. Separate versions cited the Associated Press as the quote's source, also with a date of 10 December 1993. We were unable to locate a matching item published by that newswire on that date.

A transcript was clearly scanned from material generated on or around 9 December 1993. During the appearance Reno extensively discussed her position on gun control and safety, indicating that she did not believe registration was effective (a remark that directly contradicted the "registration is only a step" portion of the purported 10 December 1993 quote): In a subsequent exchange, Reno reiterated that registration was a measure she felt was ineffective in reducing gun violence, not a necessary step towards prohibition: Another subsequent exchange pertained to limits on gun ownership. An unidentified member of the press asked Reno whether she favored limits on the number of guns any individual could lawfully own. Again in stark contrast to the purported GMA quote, Reno flatly said "no" before reiterating her interest in ensuring safe gun ownership: Finally, Reno was questioned about whether gun control might go "too far" following the then-recent LIRR massacre, to which she affirmed that "everybody [in the debate] was "interested in trying to develop an appropriate balance." In those remarks, Reno indicated that then-President Clinton was raised in a culture that favored hunting, and that the administration sought to balance gun policy fairly:

Reno's 9 December 1993 remarks resulted in a number of news articles dated 10 December 1993, including a Washington Post piece which reported:

Attorney General Janet Reno said yesterday at her weekly news conference that she supports the concept of licensing firearms buyers or setting standards that they would have to meet before they can purchase guns. The Justice Office of Policy Development is reviewing the matter. But Reno said that she is generally opposed to simply establishing a registry of firearms owners, although it is unclear how there would be licensing without registration.

We were unable to determine the origin of the quote, nor how it came to be attributed to Janet Reno. Reno was not listed among guests on the 10 December 1993 airing of Good Morning America, and we were unable to locate any Associated Press material from that date which contained the quote or any variations of it. Also, Reno's 9 December 1993 remarks during a weekly press session were readily available on the web; while Reno spoke extensively, her comments in no way resembled the quote later attributed to her (and in most cases, directly conflicted with it.) Waiting periods didn't appear to be part of debate over guns after a then-recent massacre, and Reno repeatedly stated she didn't support registration of guns as a preventive measure. Finally, Reno affirmed the Clinton administration's goal was "a balance" between safety and gun ownership, not prohibition.