Did Jane Fonda Say COVID-19 Was 'God's Gift to the Left'?

The controversial actor and left-wing activist provoked an outraged response in October 2020. 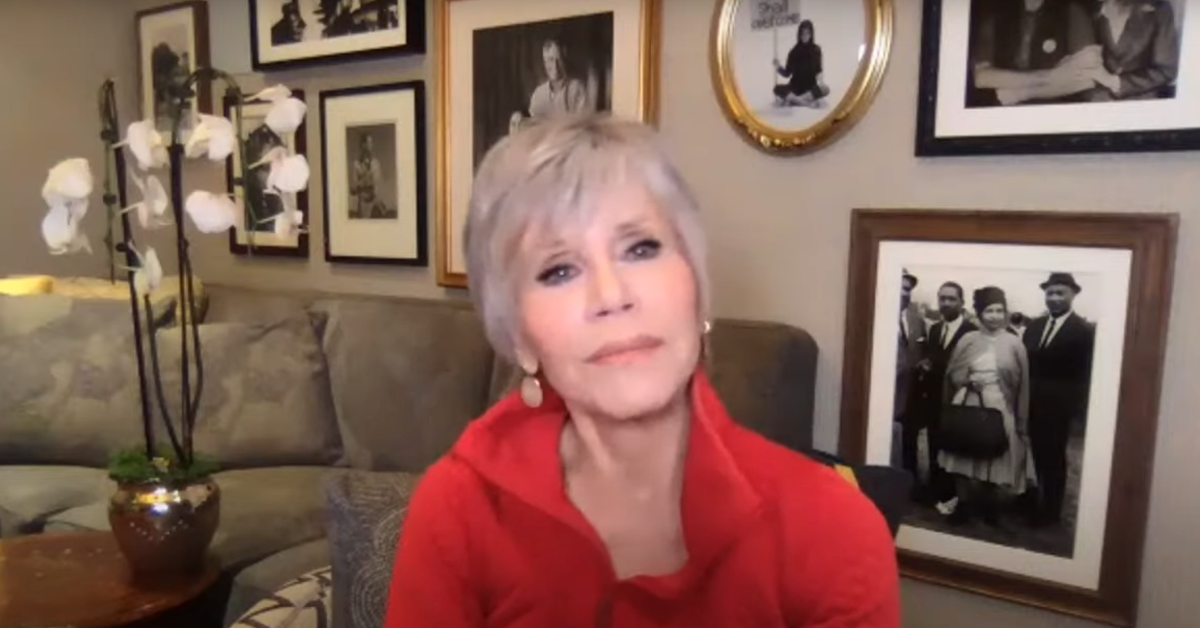 In October 2020, Snopes readers asked us to look into the authenticity of a quotation widely attributed to the actor and left-wing activist Jane Fonda, in which she purportedly said in an online video clip that the COVID-19 coronavirus pandemic was "God's gift to the Left."

Fox News, for example, reported that:

Actress Jane Fonda called coronavirus "God's gift to the left" because it allowed Americans to see President Trump isn’t helping the working class. The far-left star was busy urging Americans to vote for Democratic nominee Joe Biden and said the upcoming election is a crossroads for the nation.

Similar articles were published by The Hill and The Sun. Several right-leaning outlets described Fonda as a "Biden surrogate," including the Washington Free Beacon, the right-wing conspiracy theory website the Gateway Pundit, and the Daily Caller:

We can stop fascism. We are at a point where we can — this is a crossroads, it's an existential crossroads, and we are people who can help determine which way humanity goes. What a great gift! What a tremendous opportunity, we're just so lucky. We have to use it with every ounce of intelligence and courage and wherewithal we have, because you're absolutely right — this is it. This is it.

And I just think that COVID is God's gift to the Left. [Laughs]. That's a terrible thing to say. I mean I think it was a very difficult thing to send down to us, but it has ripped the Band-aid off who he [Trump] is and what he stands for, and what is being done to average people and working people in this country. We can see it now. People who couldn't see it before, they see it now. And we have a chance to harness that anger and make a difference. So I just, I feel so blessed to be alive right now.

The clip published by various, mostly right-leaning outlets was authentic and not doctored or manipulated in any way.

Although the footage was cut from a much longer conversation, that removal from its original context did not distort the sense or meaning of Fonda's remarks, which came towards the end of an Oct. 2, 2020, discussion between Fonda and Maurice Mitchell, national director of the Working Families Party, a small New York-based left-wing party:

Fonda has been a controversial public figure for several decades and is something of a hate figure for some on the American Right. An outspoken opponent of the Vietnam War, Fonda visited North Vietnam in 1972 for two weeks, spent time with Communist troops there, and was photographed sitting on an anti-aircraft gun, an episode that prompted widespread outrage back in the U.S. and which Fonda later said she would "regret to my dying day."

Descriptions of her as a "Biden surrogate" could damage the Democratic presidential candidate's campaign, by association, in the minds of some readers, but they appear to be factually questionable.

A campaign surrogate is a person, usually already well-known, who represents the candidate at public events and rallies, because the candidate can't appear everywhere at once, or because the surrogate in question might hold a special appeal for a particular intended audience. They can be local politicians; family members (think of Eric, Ivanka and Donald Trump Jr.'s roles in the Trump campaign, or the role that Jill Biden plays in the Biden campaign); and sometimes celebrities (think of the rapper Killer Mike's role in the primary campaign of U.S. Sen. Bernie Sanders of Vermont, or the actor Eva Longoria's role in both the 2012 reelection campaign of then-President Barack Obama, and the 2016 campaign of former Secretary of State Hillary Clinton).

Campaign surrogates and their public appearances are typically closely coordinated with campaign staff. Biden's 2020 campaign even has a "Director of Surrogates," the retired Olympic figure skater Michelle Kwan, who is responsible for enlisting surrogates and orchestrating their efforts.

We could find no record of Fonda having been described as a Biden campaign surrogate before those characterizations cropped up in October 2020. She took part in a campaign fundraiser in August 2020, along with Lily Tomlin, her co-star on the Netflix show "Grace and Frankie," but that's the only involvement with the Biden campaign that we found. As recently as March 2020, Fonda was endorsing Sanders, not Biden, for the Democratic presidential nomination.