Did a Radio Host Tweet About Sodomizing a Parkland Survivor With a 'Hot Poker'?

St. Louis "media personality" Jamie Allman wrote that he was "getting ready to ram a hot poker up David Hogg's ass." 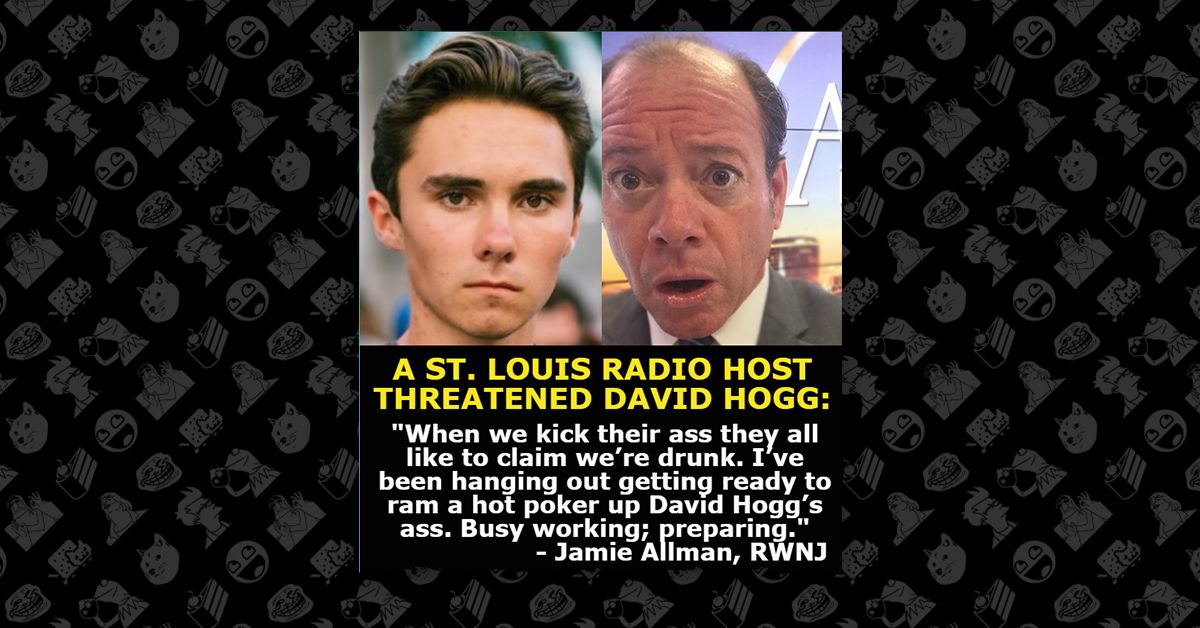 In the aftermath of a deadly high school school mass shooting in Parkland, Florida in February 2018, some commentators verbally attacked a group of students who survived the mass shooting and became leaders in the anti-gun violence #NeverAgain movement.

Ted Nugent, the pro-gun rights, right-wing rock musician, denounced the teen activists, including Emma Gonzalez and David Hogg, saying they have "no soul" and calling them "mushy-brained children." Fox News host Laura Ingraham apologized to Hogg after mocking him for "whining" about not get into several colleges — a tweet that prompted several advertisers to withdraw their support from Ingraham's show.

And in March 2018, conservative radio and television personality Jamie Allman mused on Twitter about sodomizing Hogg with a "hot poker," an outburst highlighted in a viral meme posted by the "Really American" Facebook page, which wrote:

A St. Louis radio host threatened David Hogg: "When we kick their ass they all like to claim we're drunk. I've been hanging out getting ready to ram a hot poker up David Hogg's ass. Busy working; preparing."

Missouri State Congresswoman Stacey Newman called for a boycott of his show, in response to these threats against a child. Spread this coward's shame, and help get his vile show shut down!

The quote in the meme is accurate. On 26 March, Allman did post those words on Twitter, as part of a longer conversation: It's not clear what preceded and followed the tweet or what the context was, because Allman's account has since been locked and he did not respond to our queries in time for publication.

Democratic State Representative Stacey Newman reported Allman's outburst to Twitter, whose investigation found that he had violated their rules around "abusive behavior."

As reported by the St. Louis Post-Dispatch, several companies have withdrawn advertising from KFTK, the conservative talk radio station where Allman hosts a morning show every weekday, citing his tweet as the cause.

According to the Washington Post, Allman resigned his position at KDNL, the St. Louis-area ABC affiliate where he had hosted a nightly television show called the Allman Report.

On 9 April 2018, a spokesperson for the Sinclair Broadcast Group, which owns the station, told the Post: "We have accepted Mr. Allman’s resignation, and his show has been canceled."