Did Texas Rep. Talarico Open Up About Having Diabetes and Announce Insulin Cap Bill?

He tweeted: "3 years ago I almost slipped into a coma and died." 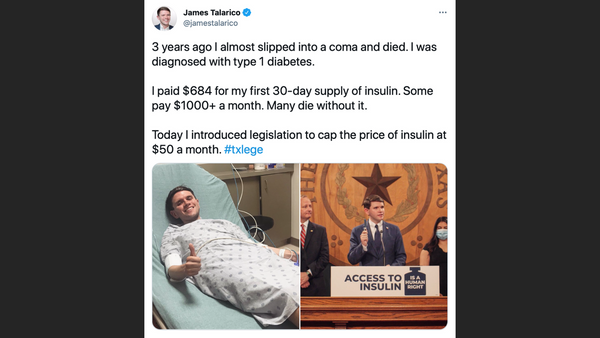 In early April 2021, social media users circulated posts that included a tweet in which Texas state Rep. James Talarico, a Democrat, supposedly shared publicly for the first time that he suffers from Type 1 diabetes and said he was authoring new legislation that would cap monthly insulin payments for diabetic Texans. The alleged tweets by Talarico were authentic.

On April 6, he shared via his official Twitter account as a Texas legislator side-by-side photos of him presumably being treated for diabetes symptoms at a medical facility and promoting the bill (H.B. 40) at a media event.

Over the course of 20 tweets, Talarico shared a story in which he recounted experiencing near-fatal symptoms of Type 1 diabetes during a campaign event in spring 2018, and he ultimately received a diagnose for the chronic condition at age 28. The thread began:

3 years ago I almost slipped into a coma and died. I was diagnosed with type 1 diabetes. I paid $684 for my first 30-day supply of insulin. Some pay $1000+ a month. Many die without it. Today I introduced legislation to cap the price of insulin at $50 a month.

I haven’t shared this story publicly before.

Many accounts, like the one below, thanked the legislator for opening up and shared their own experiences of trying to pay for insulin or seeing loved ones struggle with the costs.

The series of tweets went on to explain market conditions affecting the price of insulin syringes or insulin cartridges for pens or pumps. (According to a Congressional analysis in September 2019, insulin averaged $34.75 per dose in the U.S. — a total that’s almost 2.5 times higher than the average price in other countries.)

As a result, Talarico said he authored the bill that would "cap out-of-pocket costs for insulin at $50/month," pending approval his colleagues' approval. According to legislative records, dozens of lawmakers from both political parties have endorsed the proposal (the text of which is available here). For the first time, they held a public hearing on April 6, the day of Talarico's tweets.

“We’ve got to make sure that people in this state who have diabetes, like me, like thousands of your constituents, do not die because they do not make the money because to afford the medicine that they need to live," he said at the hearing, according a video obtained by Snopes.

As of this writing, the House's Committee on Insurance was considering the bill, and the Senate had approved its version of it.

In sum, considering the tweets from Talarico's official account, as well as legislative records that list him as the author of H.B. 40 and his comments at the April 6 public hearing in which he discussed his personal medical condition while promoting the legislation, we rate this claim "True."