Is 'James Maxwell Trump' the Son of Ghislaine Maxwell and Donald Trump?

We're going to need to see the long-form birth certificate. 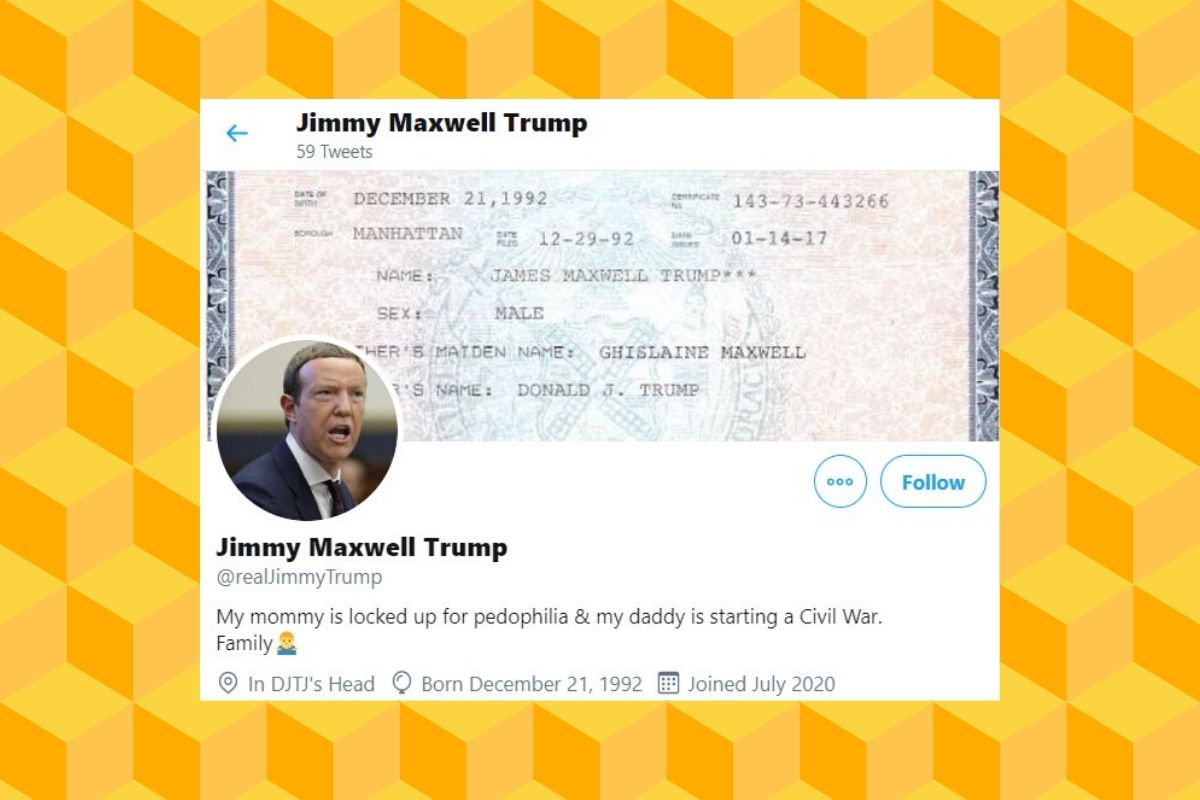 Claim:
A birth certificate for "James Maxwell Trump" shows that he is the biological son of Ghislaine Maxwell and Donald Trump.
Rating:

On July 2, 2020, British socialite Ghislaine Maxwell was arrested and charged with conspiring with convicted pedophile Jeffrey Epstein to sexually abuse minors. Shortly afterward, a person claiming to be "James Maxwell Trump" started a Twitter account and shared an image supposedly showing a birth certificate proving that he was the biological son of Maxwell and U.S. President Donald Trump. Several red flags indicate this Twitter account is not on the up and up. For starters, it was started in the immediate aftermath of Maxwell's arrest. While some social media users shared photographs of Maxwell and Trump together to imply that the president was involved in the British socialite's alleged illegal activities (Maxwell has been photographed with numerous celebrities and politicians, including Bill Clinton and Michael Bloomberg), this account took the smear tactic one step further and pushed the unfounded claim that Trump and Maxwell had a love child.

Furthermore, the account profile pic doesn't feature a real person named "James Maxwell Trump" (the image is actually a mashup of Trump's and Mark Zuckerberg's faces). Lastly, this account lists its "location" as "in DJTJ's Head," a reference to Donald J. Trump Jr. In other words, it appears the goal of this account is to troll the Trump family, not spread legitimate concerns about an illicit affair.

The birth certificate for Tara Ann Uzamere has been online since at least August 2019, long before the image of "James Maxwell Trump" started to circulate online.

Although the creator of this hoax document did take care to alter the birth certificate number (top right), they changed it in a way that proves that this document is a hoax. The first three numbers indicate the birth area code, the next two indicate the year of registration, and the last six are serial registration numbers that are sequentially assigned. The Social Security Administration writes:

Since 1948, most State registrars use a uniform numbering system.

On the real birth certificate, we see the first three numbers (156) correctly refer to the location of birth, New York City, and that the second two numbers (80) identify the correct birth year.  On the fraudulent document, the first three numbers indicate that this person was born in Utah (contrary to the listed birth place of Manhattan), and the next two numbers indicate that this birth certificate was registered in 1973, 19 years before this person was allegedly born.