Did David Bowie's Wife Say She Caught Him in Bed with Mick Jagger? 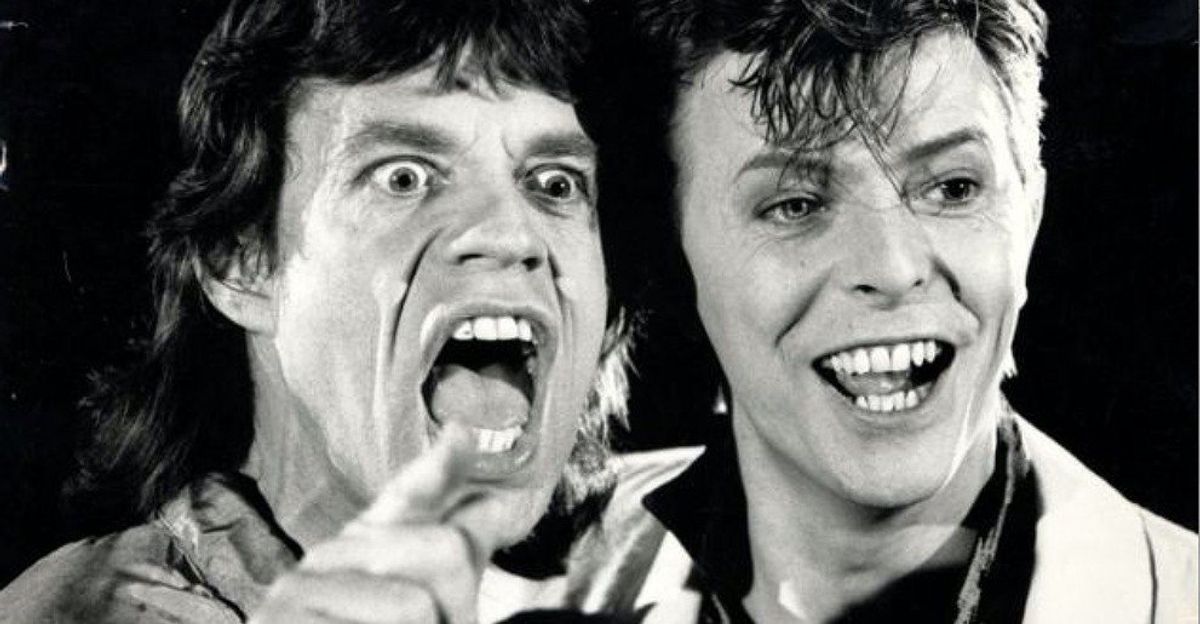 Claim:
David Bowie's wife said she once caught him in bed with Mick Jagger.
Rating:

Recipe for a salacious, titillating rumor:

This was the fare cooked up on The Joan Rivers Show on 4 May 1990, when Angela Bowie took advantage of the recent expiration of a ten-year gag order (imposed as a condition of the divorce agreement that ended her 1970-80 marriage to rock star David Bowie) to spill some dirt on her famous ex-husband.

In a nutshell, what happened was Rivers promised her audience that her guest was "ready to dish — and I mean down and dirty dishing — about her ex." Angela Bowie reportedly got cold feet and maintained that she didn't like "kissing and telling," whereupon she was "led off camera and subjected to some scornful denunciation of her cowardice from Rivers and another guest, shock-humor radio personality Howard Stern."

After rethinking her position, Angela returned to the set and discussed her stormy marriage to rock's "Thin White Duke," claiming: "I caught him in bed with men several times. In fact the best time I caught him in bed was with Mick Jagger" (when she walked into her bedroom after returning from a trip). When Howard Stern prodded her by asking if the two men had their clothes off, she answered, "They certainly did."

Although the former Mrs. Bowie did not say when the incident occurred or offer any further details (other than to note that her reaction to the sight of her husband in bed with another man was to go and make breakfast), the implications of her tattle were clear. David Bowie had long since openly acknowledged his bisexuality, and although Mick Jagger had not made any such revelation (and had certainly bedded a bevy of women), rumor had it that the Rolling Stone wasn't averse to taking a turn with another man once in a while -- and perhaps had with a bandmate or two.

Two men of variable sexual persuasion in bed together, both naked? — that could only mean one thing. Buddies returning from a night of carousing might drop into the same bed to sleep it off. They might even strip down to their underclothing. But to lie in bed together naked? Ho ho, they obviously must have had something more than sleep on their minds.

But was any of this true? Mick Jagger was quick to dismiss the whole thing as "complete rubbish," and a public letter from David Bowie's lawyer stated that any "implication that there was ever a gay affair between Mick Jagger and David Bowie is an absolute fabrication." Sure enough, within a week Angela Bowie was backtracking, claiming that although what she had revealed was literally true, it didn't necessarily mean what people assumed it meant. On a May 11 Geraldo appearance she clarified: "I certainly didn't catch anyone in the act. All I found were two people sleeping in my bed. They happened to be naked and they happened to be Mick Jagger and David Bowie and it's not a big deal. It doesn't mean necessarily that it's some sort of affair." Several months later she was already dismissing the gossip as "old news" and claiming that the two men were only "passed out in bed."

Nonetheless, since denials aren't nearly as fascinating as rumors, the tale that "the head Stone was also sleeping with [Angela's] husband" spread far and wide. Angela then muddied the issue ever further with her 1993 tell-all book Backstage Passes, in which she disingenuously chided the public for assuming what she had obviously intended to imply, while nonetheless admitting that she herself still believed what everyone else had assumed:

[A] furor of publicity erupted when, as a guest on Joan Rivers's talk show, I mentioned that one morning on Oakley Street I came upon David and Mick sharing a bed.

I had just flown back to London from New York. I entered the house and went into the kitchen, and Daniella told me, "I think Mick and David are asleep upstairs."

I said, "Oh, okay," and went and opened the bedroom door, and there indeed they were, asleep in our bed. I asked them if they wanted coffee, and they said yes. And that was that.

There are two ways of looking at that incident. One was that it was just a thoroughly normal London scene: Best friends stagger home drunk or stoned from some night spot or party or whatever, strip off their clothes somehow, and fall into bed and pass out. Morning comes, wife arrives with wake-up beverage, hangover begins, life resumes.

But oh, no. Joan Rivers, and her studio and TV audience, and every gossip columnist in the world, leaped straight to the other obvious conclusion, which is that since Mick Jagger had been found in bed with David Bowie, Mick must be (gasp!) gay or, even worse, (faint!) bisexual!

Well, leaving aside the question of why on earth that should have been news to anyone who'd paid any attention to the Stones' affairs, particularly the convoluted girlfriend-swapping and buddy-bonding among Mick, Keith, and Brian before Brian ended up in that swimming pool, I really don't like the automatic assumption that if two men are found in bed together, something sexual must be happening. That's so square, so typically American.

On the other hand, however, I think the assumption was correct. Or to put it another way, when I walked into that room and found Mick and David together, I felt absolutely dead certain that they'd been screwing. It was so obvious, in fact, that I never even considered the possibility that they hadn't been screwing. The way they'd been running around together and the way David made a virtual religion of slipping the Lance of Love into almost everyone around him, and then the fact that Mick had a perfectly good bed of his own just three hundred yards away from where he was passed out naked with David — it all added up inescapably in my head as well as my gut. I didn't have to look around for open jars of K-Y jelly.

Maybe I should have, because then my eyes would have seen the proof of what I knew in my heart. But I didn't, so I can't say conclusively that those two alley cats were actually going at it that night. While they were still awake together in my bed, I wasn't there.

David Bowie's response to the matter (as reported in US magazine in 1995) was succinct:

About 15 or 16 years ago, I really got pretty tired of fending off questions about what I used to do with my [penis] in the early seventies. My suggestion for people with prurient interests is to go through the 30 or 40 bios on me and pick out the rumour of their choice.

The friendship between David Bowie and Mick Jagger (and Angela Bowie's suggestion that it may have been more than a "friendship") led to several retroactive rumors concerning whom Mick Jagger was singing about in the Rolling Stones' 1973 #1 hit "Angie," a bittersweet (and presumably autobiographical) ballad about the end of an unsatisfying love affair. (Part of the speculation may have been fueled by Angela Bowie's statement on The Joan Rivers Show that when she when returned from a trip to find her husband and Mick Jagger in her bed, she thought that "they were composing 'Angie.'")

When a musician composes a song about an unhappy love affair with a woman's name for a title, many of us assume it must have been inspired by a real-life romance with someone of that name (especially if it turns out he knew a girl called that, no matter who she was in his life). Yet this is often not the case; songwriters routinely pen works where names and details are chosen because they fit the meter of the composition. Although the song itself could be the catharsis of deeply-felt personal angst expressed as a specific (yet completely fictional) outpouring, or could be an actual chronicle of a hurtful experience endured, it does not necessarily follow that the gal who stirred up those feelings in real life would be given the same name in the song. Autobiography only goes so far — if the meter is not right, the name goes.

Songwriters also have composed pieces built around specific names merely because they liked the sound of them: Buddy Holly did know a "Peggy Sue" (the girlfriend of drummer Jerry Allison), but the song wasn't based on any real-life romance between her and Buddy. Sometimes musicians just write for their audiences, churning out works that expound upon common experiences their music-buying public will identify with (such as heartwrenching partings). For such offerings, the eponymous girl does not have to be anyone real, because the writer is calling upon universal themes for the substance of his song.

Was "Angie" about any one person, or was the name just plucked from the air? We don't know. But we do know enough about music not to immediately conclude that a song titled with a girl's name means the writer had an unhappy experience with a girl of that name.

Yet speculation over the identity of the "Angie" of Rolling Stone fame has long past ceased to be an active topic, a quieting of wagging tongues that has yet to take place with the original rumor, that of Mick Jagger and David Bowie having sexual knowledge of each other. Failed love affairs as expressed in song lyrics only hold interest for so long, but a salacious rumor about famous people engaging in a homosexual coupling will live as long as there are people to repeat it.