Jaden Smith Is Not Dead, Despite Viral Facebook Death Hoax

Google users looked for answers after Facebook posts falsely claimed that actor Will Smith had announced his son's death. 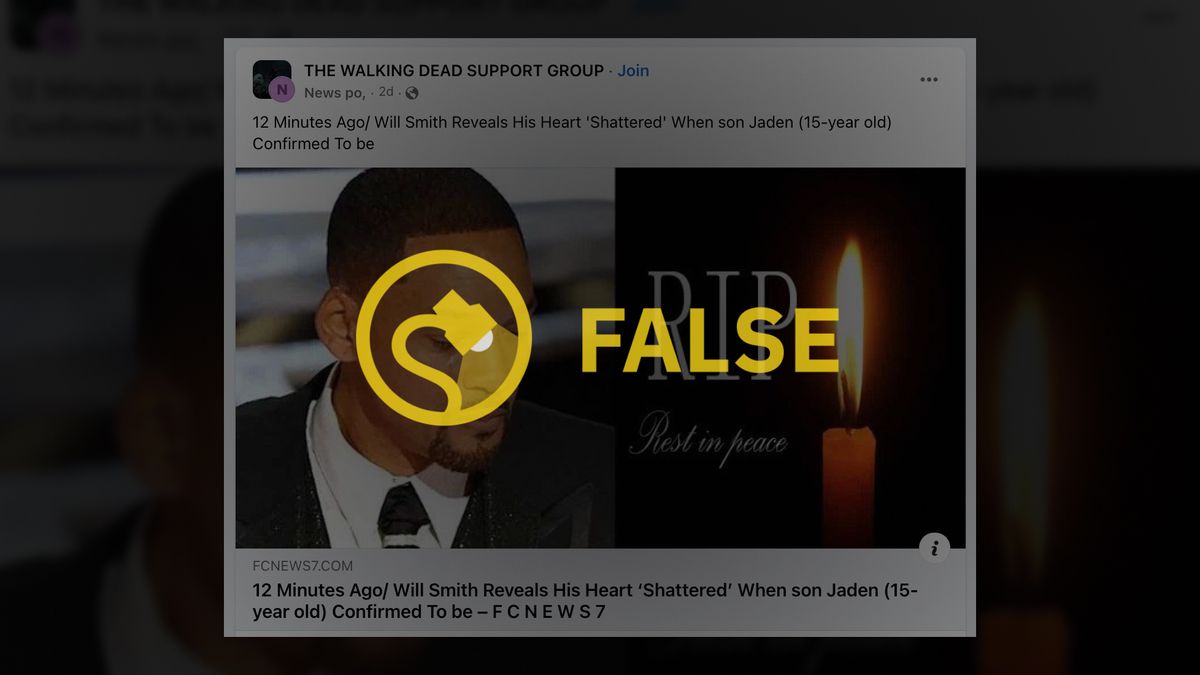 Claim:
Actor Will Smith announced the death of his son, Jaden, in January 2023.
Rating:

On the morning of Jan. 23, 2023, a rising search on Google was users asking, "Did Jaden Smith die?" This was nothing more than a death hoax that stemmed from Facebook posts, YouTube videos, and fake online news websites that falsely claimed actor Will Smith announced the death of his son, Jaden Smith.

We found no credible news articles that mentioned anything of Jaden Smith being dead or hospitalized, nor did we locate reporting that said he had been involved in an accident or come down with an illness.

RELATED: Why Are Online Death Hoaxes so Popular?

A search of Facebook showed that many suspect users were posting links to fake online news websites that claimed, "5 Minutes Ago/ Will Smith Reveals His Heart 'Shattered' When son Jaden (15-year old) Confirmed To be." The sentence ended without saying the word "dead," but it was implied by the thumbnail image above the headline. Also, Jaden Smith was 24 years old at the time, not 15.

The picture associated with the posts showed Will crying next to a photo of a candle and the letters "RIP" and words "rest in peace." 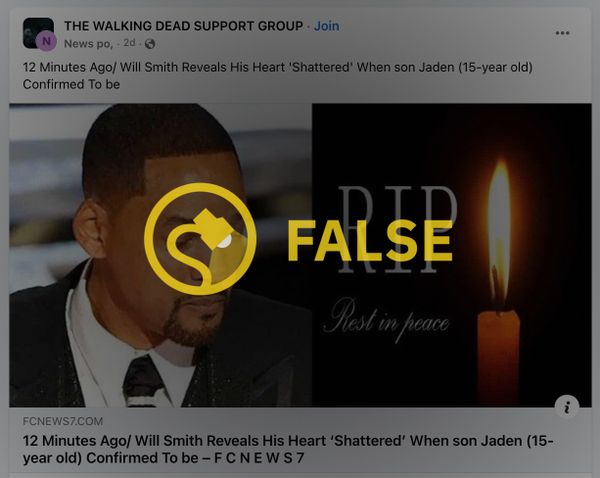 This misleading picture seemed to be all over Facebook.

"Is it true that Jaden Smith is dead?," one Facebook user posted.

Another person asked, "Somebody said Will Smith's son Jaden Smith died. Is that true?"

We also found users who claimed Jaden Smith had died in an "accident." This was similar to something else that we noticed. We typed his name in the Facebook search bar. Before clicking to execute the search, Facebook suggested the phrase, "Jaden Smith accident photos." However, again, we found no recent news of any sort of accident.

These kinds of posts had previously been spread on Facebook for actor Bruce Willis and other celebrities, even though he and the other people mentioned were all alive.

Some of these hoaxes led to fake online news websites much like the one for the younger Smith, which showed scammy ads that asked users to install various kinds of software. One of those pieces of software was Adobe Flash Player, a product that was discontinued in 2020. Some of these ads appeared to contain malware that could infect reader's devices. We strongly discourage visiting any of the websites that result from these kinds of death hoaxes.

In addition to the Facebook posts that falsely claimed Jaden was dead, we also noticed the same thumbnail image of Will Smith and the "rest in peace" candle associated with a YouTube video. That video was embedded at the bottom of the aforementioned scammy articles that may have contained malware-filled ads.

This video appeared to be part of the same death hoax.

We previously reported on other death hoaxes involving Jaden Smith. If readers find any future death hoaxes for him or other actors, feel free to let us know on our contact page.

Mikkelson, David. "Were Will and Jaden Smith Killed in a Car Crash?" Snopes, 7 Dec. 2019, https://www.snopes.com/fact-check/will-jaden-smith-death-hoax/.