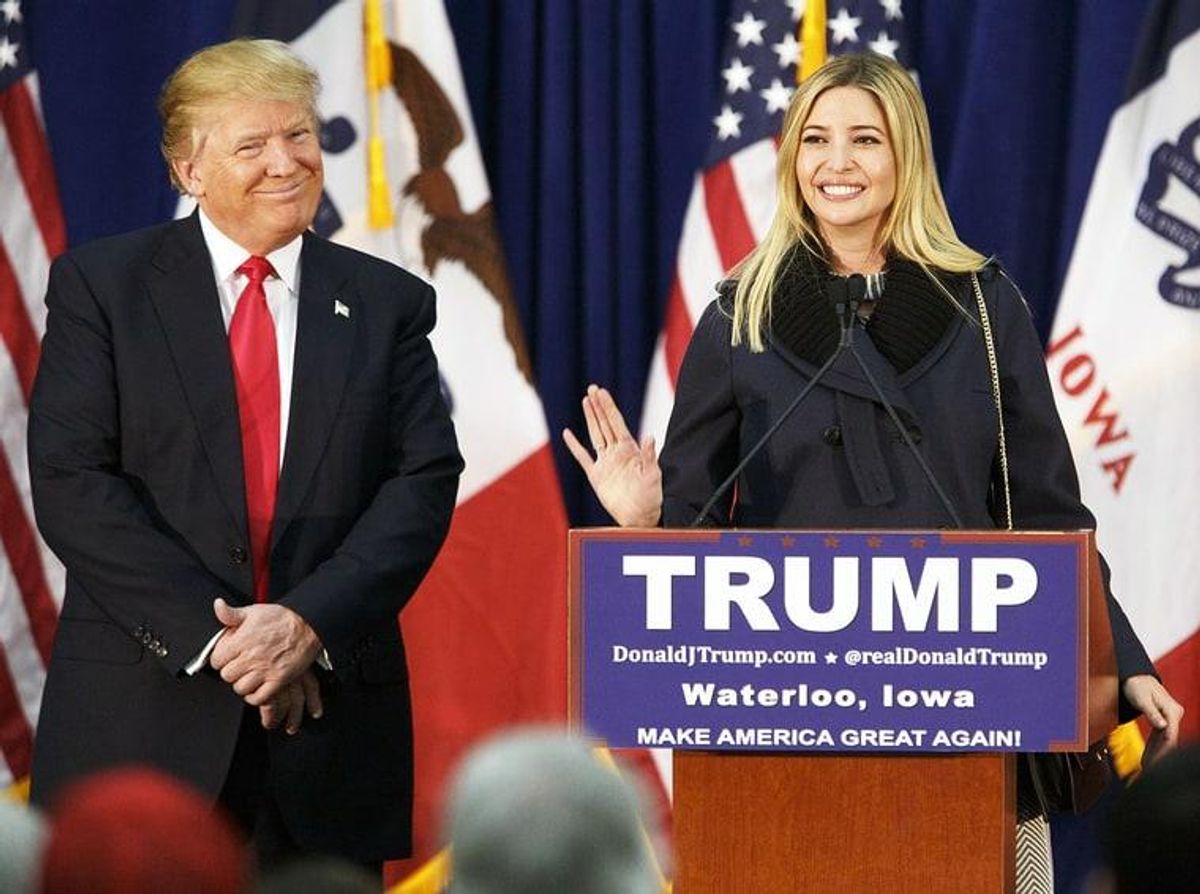 Claim:
A photograph shows Ivanka Trump grinding on the lap of her father, Donald Trump.
Rating:

A 1996 photograph was captioned as showing a 15-year-old Ivanka Trump sitting on her father Donald Trump's lap during a concert at their Mar-a-Lago estate.

The photograph does not in itself document any 'grinding' or other inappropriate physical activity between Ivanka and her father.

In September 2016, a photograph purportedly showing a 15-year-old Ivanka Trump "grinding" on the lap of her famous father, Donald Trump, during a Beach Boys concert in 1996 at the family's estate in Florida was circulated by web sites such as Winning Democrats as looking "too much like a girl grinding on her boyfriend's lap": How many times can the creepiness of the Trump family seriously shock us? I mean…Trump has stated that he would date his own daughter, asked strangers if they thought she was hot, told a live morning show crowd the thing he had most in common with her was sex and groped her live on stage at the Republican National Convention. What could be worse than that?

The answer is, of course, the pictures. It seems that Donald’s creepy obsession with Ivanka Trump began when she was very young. It’s just…disturbing. Surely you’ve seen them and surely they’re emblazoned on your mind. The latest to emerge, however, could be the worst yet, because it’s Ivanka who seems to be the one truly enjoying herself ... a little too much. Could it be she did all she could to keep Lord Cheeto happy to avoid severe consequences? Who knows. All I know is that this looks way too much like a girl grinding on her boyfriend’s lap.

Although this photograph is genuine, it is not in itself evidence of some form of improper relationship between Donald Trump and his daughter. While some may view this image as evidence that Trump has a "creepy obsession" with Ivanka, others see it simply as a picture of a father and his teenaged daughter enjoying a concert together.

This photograph was published by Getty Images on 1 January 1996 with the following caption:

Partygoers, including Ivanka Trump (center, in white) who her sits on her father, businessman Donald Trump's lap during a concert (by the Beach Boys) at the Mar-a-Lago estate, Palm Beach, Florida, 1996. Also visible seated front row left is Trump's wife Marla Maples.

We note that this picture captures a fleeting moment, and without additional photographs (or video) of the event, it's impossible to say whether Ivanka was sitting on her father's lap for a prolonged period of time or for just a few seconds (or whether, despite the captioning, she was actually on his lap at all).

While late-night comedians have frequently mocked Trump for having an improper relationship with his daughter, those accusations are all based on speculation rather than solid evidence.