Was Ivana Trump Buried at the Trump National Golf Club? 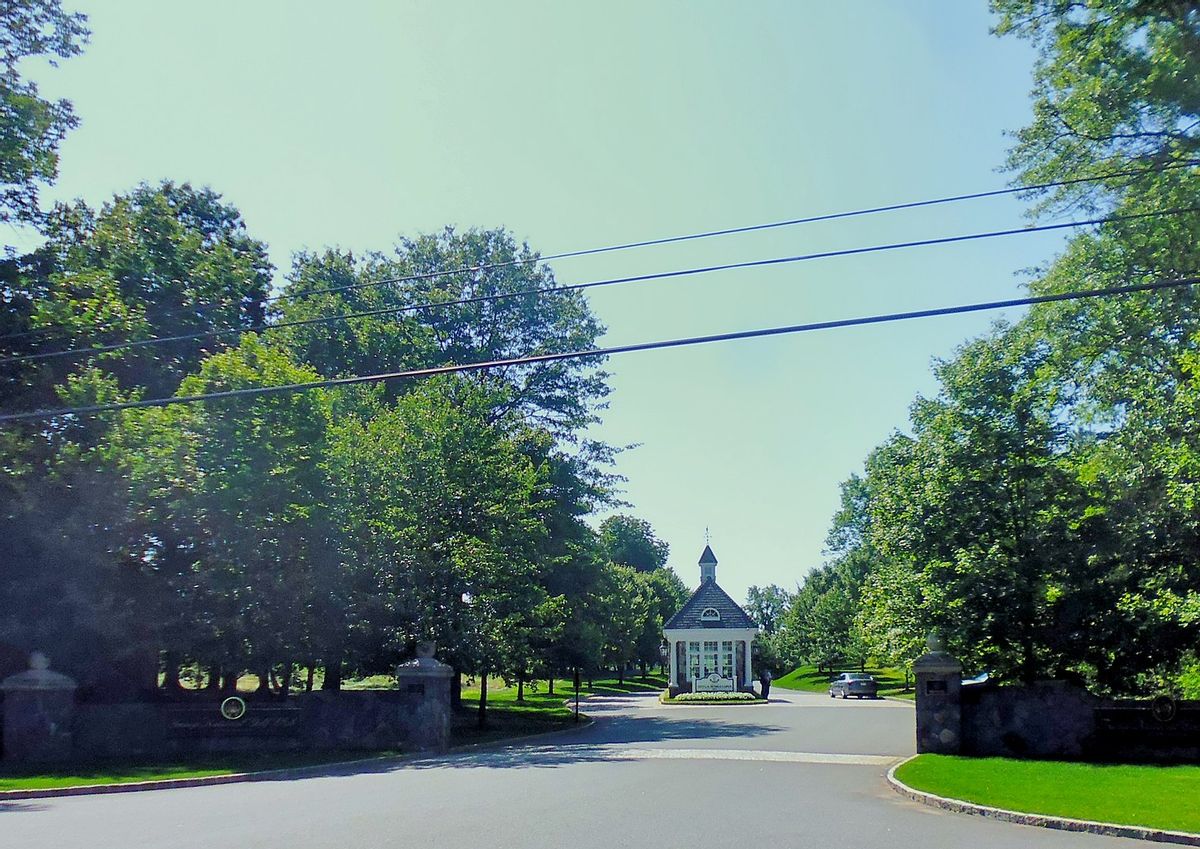 Former U.S. President Donald Trump’s first wife, Ivana Trump, was laid to rest at the Trump National Golf Club in Bedminster, New Jersey, based on media reports and photographs taken of the site.

New York Post reporters visited the golf club and photographed Ivana Trump’s grave. Their report included a number of shots from different angles, including one revealing a wooded area near the site. A source told the New York Post that Ivana was buried not too far from the club house. According to the report, she was buried in a place that was not visible to golfers as they tee off for a round of golf. The small section of the club where she was buried is below the backside of the first tee.

A number of memes consisting of edited versions of those photographs went viral in late July 2022, with one in particular getting tens of thousands of likes and comments on Instagram. The image — posted by Instagram account homegrownterrorists — showed a golf cart rolling past what appeared to be Ivana Trump's gravesite. It's clear that this photograph is fake when it's compared to the pictures published in the New York Post article. The gravesite has been inserted into a wider shot of a golf cart on a golf course fairway. Unlike the Post's photographs, the manipulated image doesn’t show a wooded area immediately adjacent to the grave.

A separate rumor speculates that Trump used the burial site for tax break purposes. Indeed, the New Jersey tax code does exempt cemetery land from all taxes, rates, and assessments. Potentially, her grave could save the property from paying a significant sum in a state with high tax rates. According to the code, a cemetery company is exempt from paying real property taxes, income taxes, sales and use taxes, business taxes, and inheritance taxes; cemetery trust funds are also exempt from taxes.

Trump has expressed his desire to be buried at the New Jersey golf course for years. His company even described it as his “favorite property” in a 2014 filing with the state. A 2017 Washington Post report revealed how he had been trying to convince local authorities to let him build cemeteries at the golf course since 2007. After numerous attempts, two of his plans were approved around 2017, but construction for them had not begun. The 2017 report said that the Trump Organization still needed to apply for state approval to make the land a public cemetery.

However, Ivana Trump is the first known family member to be buried at the Bedminster golf club. Brooke Harrington, a sociology professor at Dartmouth and tax researcher, pointed out that the tax code has no stipulation for a minimum number of human remains needed for the tax breaks to apply.

Documents published by ProPublica show that the Trump Family Trust had sought to designate a property in nearby Hackettstown, New Jersey, as a non-profit cemetery company.

However, this was not the first time Trump had been accused of trying to reduce his taxes on the property by varying its use. A 2016 Wall Street Journal report found that the golf club benefited from a farmland tax break because part of the land was designated for agricultural purposes — specifically for hay production and a small herd of goats. The Huffington Post reported in 2019 that he had saved around $88,000 that year.

New Jersey laws state “a landowner must have no less than five acres of farmland actively devoted to an agricultural or horticultural use for the two years immediately preceding the tax year being applied for and meet specific minimum gross income requirements based on the productivity of the land.”

A representative for the Trump Organization told Fortune magazine that the links being drawn between Ivana Trump's gravesite and tax laws were “truly evil.”

While it is unknown if the choice of this location for her grave had any connection to taxes, the Trump family has a history of seeking ways to reduce tax bills. Furthermore, given the photographs, and an acknowledgement from a Trump representative regarding the location of her grave while denying the rumors connecting it to tax laws, we rate the overall claim as “True.”

Helmore, Edward. “Will Ivana Help Donald Trump with Tax Breaks from beyond the Grave?” The Guardian, 31 July 2022. The Guardian, https://www.theguardian.com/us-news/2022/jul/31/donald-ivana-trump-cemetery-golf-course-taxes. Accessed 1 Aug. 2022.