Was an Italian Economist Removed from a Plane for Doing Math That Looked Like 'Terrorism'?

In 2016, economist Guido Menzio was escorted off a flight because the passenger next to him felt his differential equations looked suspicious. 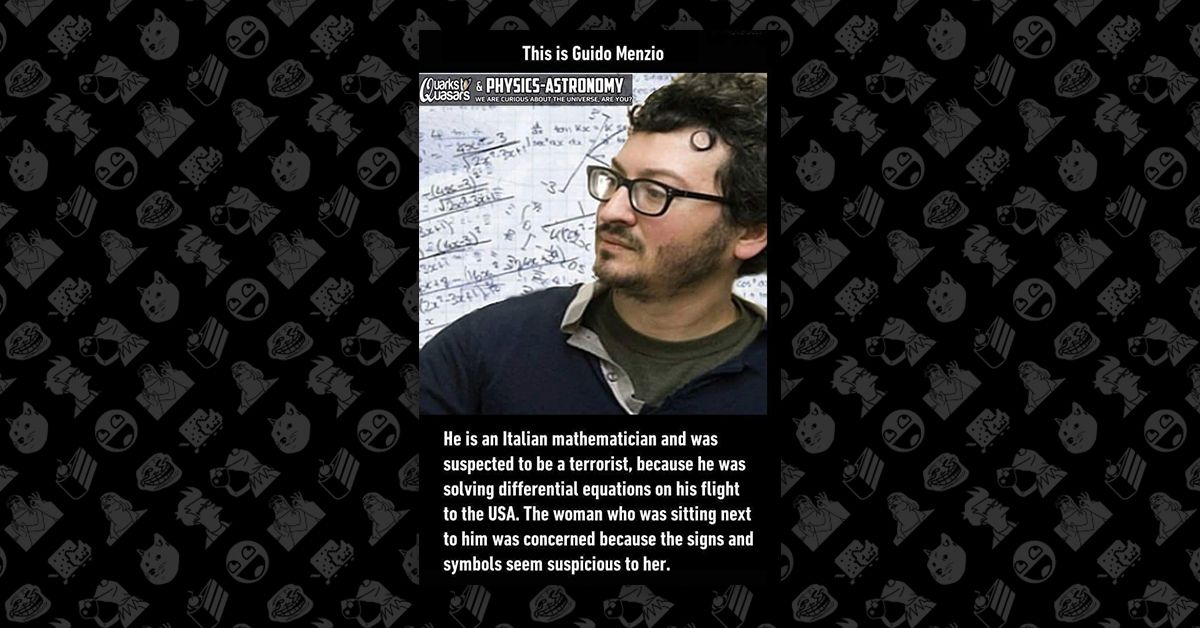 Claim:
Guido Menzio, an Italian economist, was removed from a plane because a fellow passenger thought the math problems he was working on looked suspicious.
Rating:

On 5 May 2016, University of Pennsylvania theoretical economist Guido Menzio boarded an American Airlines flight from Philadelphia to Syracuse. The flight was to be a short transfer for him en route to a talk he was about to give concerning a paper he had recently co-authored.

As Menzio sat waiting for the rest of the passengers to board the plane, he began to work through a series of differential equations -- complex-looking equations commonly used by those who mathematically model systems such as national economies. Menzio rebuffed an effort at small talk from the passenger next to him, according to the Washington Post: "Is Syracuse home? She asked. No, he replied curtly. He similarly deflected further questions. He appeared laser-focused — perhaps too laser-focused — on the task at hand, those strange scribblings."

Following this interaction between Menzio and his seatmate, the plane remained on the tarmac for a lengthy period of time before being ordered to return to the gate, at which point the passenger next to Menzio — who had complained she felt ill — was escorted away. Shortly afterwards, Menzio was also escorted off the plane and informed by a gate agent that the woman sitting next to him had expressed concerns about his curt behavior and suspicious scribbling, suggesting he could perhaps be a terrorist:

And then the big reveal: The woman wasn’t really sick at all! Instead this quick-thinking traveler had Seen Something, and so she had Said Something.

That Something she’d seen had been her seatmate’s cryptic notes, scrawled in a script she didn’t recognize. Maybe it was code, or some foreign lettering, possibly the details of a plot to destroy the dozens of innocent lives aboard American Airlines Flight 3950. She may have felt it her duty to alert the authorities just to be safe. The curly-haired man was, the agent informed him politely, suspected of terrorism.

He laughed because those scribbles weren’t Arabic, or another foreign language, or even some special secret terrorist code. They were math.

Yes, math. A differential equation, to be exact.

Menzio was allowed to return to the plane after American Airline agents determined he posed no threat, while the passenger who reported him was re-booked onto another flight. The incident drew serious viral attention and outrage at the time, in part due to the belief that Menzio “looked” Middle Eastern and was profiled by the other passenger for this reason.