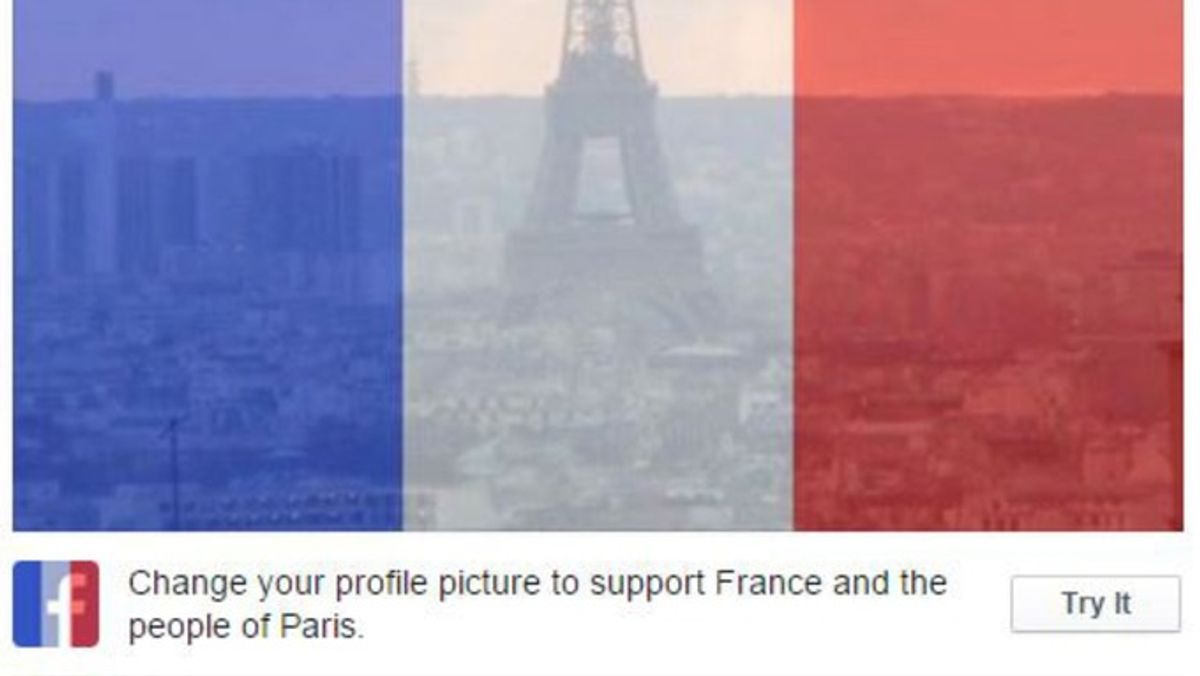 Take down your 'support Paris' profile pic because ISIS is now using it to track military families.

A post from a FB friend came across my feed today: 'I've been told by a very well informed military connection to pull your "support Paris" profile picture if you haven't already. Please pass the word. It was presented as part of their morning briefing.' Where this originated, or from whom is not given. When asked for details the original poster responded: 'I'm not sure of the details but a landlocked Marine/Naval installation was briefed this morning to remove them.' The reason is that -somehow- ISIS/DAESH is using the 'support Paris' pic to identify/track members of the military and families.

[green-label]Origins:[/green-label] On 13 November 2015, more than 130 people were killed during a series of coordinated attacks by ISIS militants in Paris. In response to the tragedy, Facebook introduced a profile photo overlay of the French flag so their users across the world could convey support for and solidarity with France.

On 16 November 2015, a Facebook user published the above-reproduced warning to the group "Military Mama Network." According to the individual who shared it, "a landlocked Marine/Naval installation" was briefed on 16 November 2015 regarding Facebook profile photo filters presenting a security threat, and they were warned to remove the French flag from profile images lest ISIS track the families of military members to their homes and harm them. (How the use of a French flag in a profile photo facilitated that chain of events was unclear, nor was any explanation offered to demonstrate whether ISIS really could carry out such cunning ruse based solely on French flag-free avatars.)

The poster admitted that the claim made little sense and asserted that French flag avatars in no way further compromised the security of military families. In fact, she did a handy job of debunking the implausible assertion herself in one of several replies to (sometimes skeptical) group members:

ISIS is using it to track military family's. Which is stupid since it's not is it military families doing it. And not just Americans either.

As the individual posting the rumor correctly observed, military families were no more likely than non-military ones to express solidarity with Paris via the profile filter, rendering it useless as a "tracking tool" by ISIS. Moreover, she added that the trend was equally prolific worldwide, further limiting its already questionable potential for use by Islamic State militants to locate military families specifically. The rumor appeared to be a possible variation on an earlier, baseless social media claim ISIS was using social media postings to target military families.

Had any security threat been posed (or even suggested by higher ups) to military families, it's likely the message would have been received or disseminated outside a single Facebook group by a civilian. We were unable to locate any credible versions of the claim, nor determine any plausible means by which ISIS operatives could employ a globally-active French flag profile filter primarily used by civilians to target and harm military families. And if ISIS truly sought to locate the families of American servicemen on Facebook, it seemed more reasonable to assume an open group called "Military Mama Network" was a better starting point than a photo filter used by everyone, everywhere in the world.

Finally, warnings such as the French flag profile filter rumor are only useful if they're disseminated and widely adopted. Chances were fairly strong that if any threat (even remote) was posed by the use of a Facebook photo filter, those potentially in harm's way would be properly warned not to use the function.